15,000 pages now transcribed! Transcribe Bentham moves onto its next phase

At the start of 2016, the Bentham Project in the Faculty of Laws has two reasons to celebrate 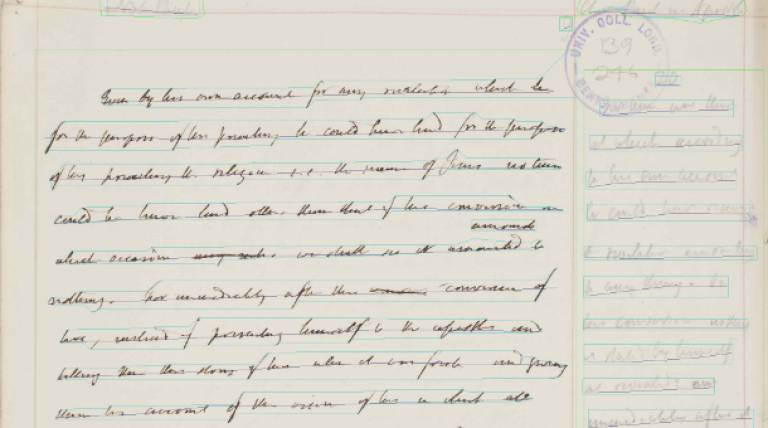 Volunteers working on the Transcribe Bentham initiative have passed an important milestone, with over 15,000 manuscript pages transcribed.  The success of Transcribe Bentham also looks set to continue as it is now part of a 3 year European project which will use new technology to train computers to read handwritten historical documents.

Transcribe Bentham invites users to explore and transcribe the papers of Jeremy Bentham (1748-1832), the British philosopher who was UCL’s intellectual inspiration.  Transcribers can work on the broad range of subjects that preoccupied Bentham, including jurisprudence, crime and punishment, democratic reform, and religion.  These transcripts are then used by the Bentham Project in the production of the scholarly edition of Bentham’s Collected Works.  Transcribe Bentham is helping to spread awareness of Bentham’s writings at the same time as giving volunteers the opportunity to make a contribution to scholarly research.  The Transcription Desk is always ready to welcome any intrigued newcomers.

The next phase of Transcribe Bentham promises new opportunities to use technology to strengthen the connections between researchers, archives, and the public.  The Recognition and Enrichment of Archival Documents (READ) project has been funded by the European Commission to the sum of more than 8 million euros.  It is an international collaboration focused on making archival material more accessible through the use of handwritten text recognition technology.  At UCL, the project team includes Professor Philip Schofield, General Editor of Bentham’s Collected Works, Professor Melissa Terras of the UCL Centre for Digital Humanities, and Dr Louise Seaward, Research Associate at the Bentham Project.

Training computers to read handwritten text could potentially revolutionise access to the written records of European history.  The automatic reading, indexing and searching of written material will make it much easier to access the information contained in archives across the continent.  The READ project aims to implement this technology through avenues such as a transcription tool, a palaeography tutorial, a mobile application to scan documents, and a platform allowing archives to run their own crowd-sourcing initiatives.  Transcribe Bentham has already begun to work with handwritten text recognition via its TSXsite.  Some of the technology behind the READ project was demonstrated in January 2016 at the ‘Technology meets Scholarship’ convention at the Hessian State Archives in Marburg held by the co:op archives project.  Further workshops and presentations will be organised throughout Europe as the project progresses.  Anyone who is interested in following the early stages of READ is invited to sign up for an account with Transkribus, the transcription tool that will be developed during the project.  Alternatively, they can email Louise Seaward of the Bentham Project for more information.