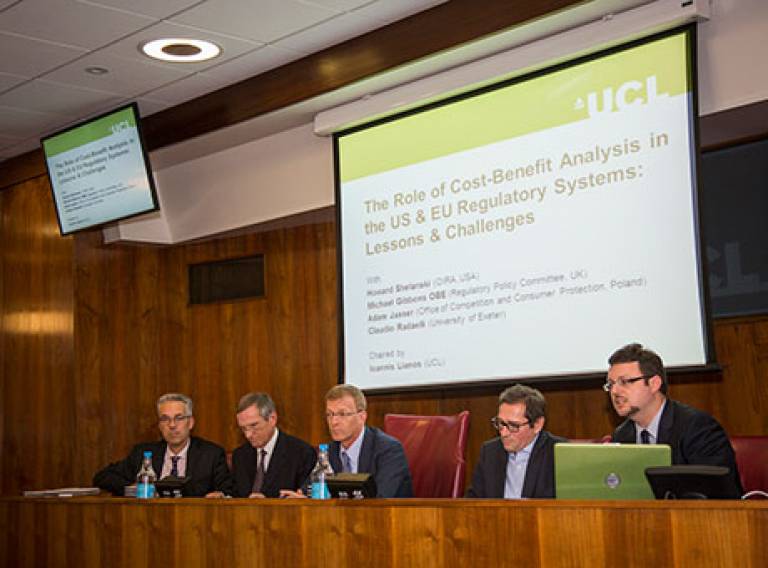 Head of the White House Office of Information and Regulatory Affairs (OIRA), Professor Howard Shelanksi, visited UCL Laws on 13 May to join a panel discussion on comparative cost-benefit analysis and impact assessment in the US and Europe.

This high profile event formed part of the recent empirical research project by the UCL Centre for Law, Economics and Society, in collaboration with the École Nationale d’Administration (ENA) on the topic of impact assessments in Europe, led by the director of the Centre and Gutenberg Chair at the ENA, Professor Ioannis Lianos.

The session, delivered to a large audience in the Moot Court in Bentham House, focused on the role of cost-benefit analysis in the US and attempted comparisons with the role of impact assessments in Europe. In his presentation, Professor Shelanski examined how Regulatory Impact Analyses (RIAs), and cost-benefit analysis in particular, factor into the development and review of federal regulations in the US.

Discussing the circumstances under which the Administration must prepare RIAs, and how the White House OIRA uses them in its assessment of significant federal rules, Professor Shelanski explored the quantification of costs and benefits, and both the limits and appropriate uses of such quantification in regulatory policy.

The commentator discussion following the presentation provided an opportunity to draw comparisons with the relevant practices in the UK, the European Union and other Member States. The panellists, Michael Gibbons OBE, Adam Jasser, and Professor Claudio Radaelli, considered the recent focus on regulatory cooperation and convergence in the context of the negotiations for the Transatlantic Trade and Investment Partnership (TTIP). Looking in particular at the section on regulatory cooperation, which includes provisions on impact assessments for planned regulatory acts, the panel suggested impacts to examine, such as the impact on international trade or investment, and proposed procedural or transparency obligations.

Bringing the discussion to a close, the panellists highlighted that an understanding of the role of cost-benefit analysis in the US policy-making, as well as the role of the tool of impact assessments in policy decision-making in the EU and EU Member States is essential in order for the transatlantic regulatory cooperation to work.

The event concluded with a question and answer session led by the chair, Professor Lianos, who also gave his remarks on the importance conducting research into the local context and social norms as part of the interaction between experts and democratic politics.

Find out more about this event