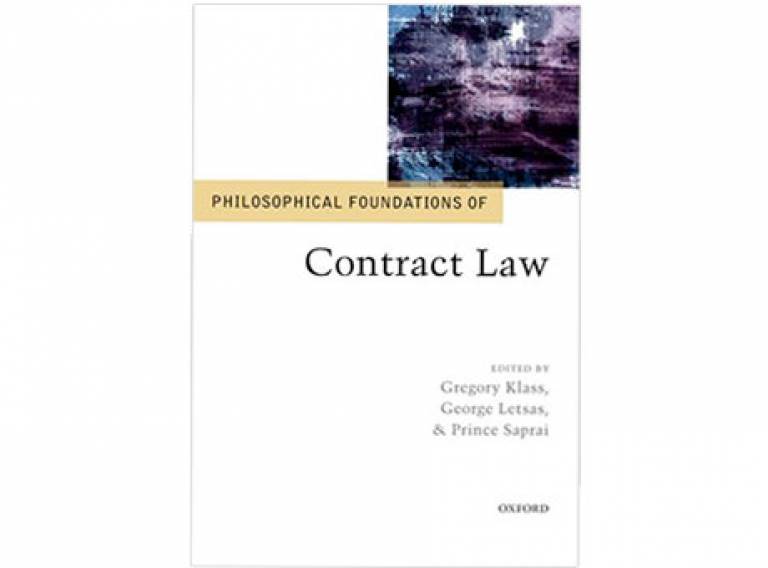 Released in December, Philosophical Foundations of Contract Law, identifies key questions and issues underlying the philosophy of contact law, and provides a point of entry into cutting-edge research in the field. Including essays by leading figures in the field including Randy Barnett, Charles Fried, Margaret Radin and Joseph Raz, Philosophical Foundations of Contract Law sheds new light on controversial doctrinal debates, including contract formation and interpretation, unfair terms, the principle of good faith, defences and remedies.

The collection is the product of the inaugural Bentham House Conference on the Philosophical Foundations of Contract Law, which took place in 2013. The conference focused on general themes in the contract theory literature, such as the nature of promising, the relationship between contract and other moral concerns such as fault, fairness and distributive justice, and the application of more abstract philosophical ideas to specific doctrinal issues.

The conference and the volume demonstrate the Faculty’s continuing commitment to world-class philosophical inquiry into the nature of areas of law. The next Bentham House Conference, Philosophical Foundations of Tax Law, will take place in May 2015. Convened by Senior Lecturer in Taxation Law, Monica Bhandari, this symposium will explore tax from a philosophical perspective. The papers and presentations from the event will be brought together as a book of essays edited by Monica Bhandari.