Third-year LLB Law with French Law student, Cara Goldthorpe, has been named as the winner of the 2015 TARGETjobs Law Undergraduate Student of the Year Award 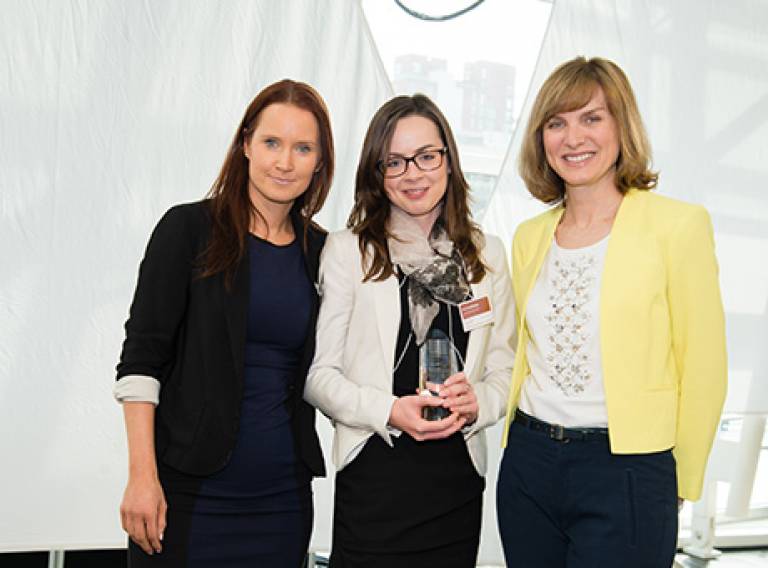 The competition, which aims to find the best undergraduates from across the UK, features twelve award categories, including Future Business Leader, Future CFO and Low Carbon Energy, as well as prizes for the top overall Male and Female undergraduate students.

Sponsored by Mayer Brown, the competition for the Law award involved three individual stages, including an online application, judgement and reasoning tests and an assessment centre. Following the students’ performance during the assessment centre, Mayer Brown decided on a final shortlist of 10 undergraduate law students from across the UK to be invited to the awards ceremony at the East Wintergarden in Canary Wharf on Friday.

Cara’s prize as Law Undergraduate Student of the Year includes a place on a three-week Summer Vacation Scheme with sponsors Mayer Brown and an iPad. Cara was presented her award by the event’s host, BBC presenter Fiona Bruce, and Danielle White, Graduate Recruitment and Development Manager at Mayer Brown.

Commenting on her reaction to winning the award, Cara said: “It came as a huge surprise when my name was called out on Friday as winner. I was already ecstatic to have made the shortlist given the standard of competition.

“I’m very grateful to TARGETJobs for organising the awards and to Mayer Brown for their sponsorship. Everyone who I have met from the firm thus far, both at their assessment day and award ceremony, have been absolutely lovely.

“I’m looking forward to joining them this summer and gaining an insight into the work that they do, since at this stage of my studies I am still making my mind up as to the precise legal career I wish to pursue. Each opportunity such as this, which offers me the chance to learn more about potential employers, is invaluable.”

Harrison Dent, who is studying European Social and Political Studies at UCL, was also a winner at Friday’s awards, taking the prize for Male Undergraduate Student of the Year. Harrison’s prize includes a summer internship programme with category sponsors, L’Oreal UK&I.