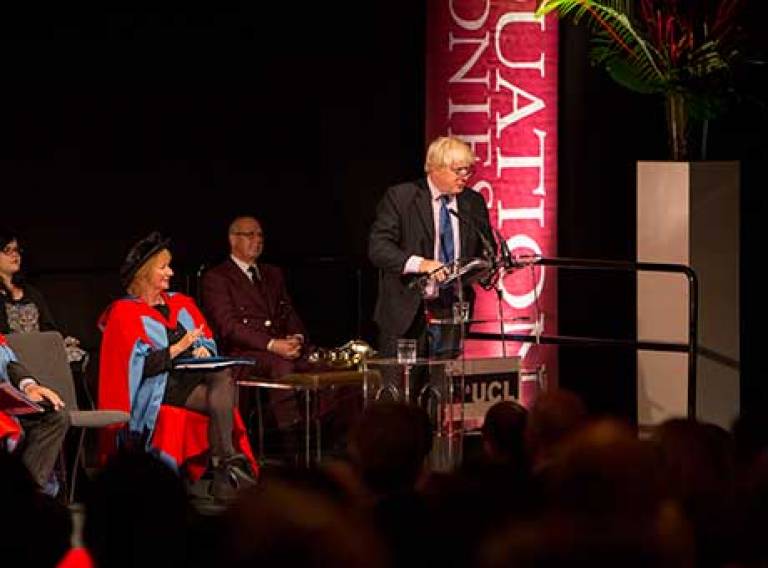 On 1 September, Dean of Laws, Professor Dame Hazel Genn welcomed the members of the UCL Laws faculty, friends, and families who came together to celebrate the achievements of the graduating class of 2014 and to confer honours on two individuals who have contributed hugely to the life of UCL Laws over a number of years.

In the morning ceremony, graduates of the LLM and PhD programmes received their degrees from UCL President and Provost, Professor Michael Arthur. During the ceremony, a UCL Honorary Fellowship was awarded to Andrew Wai Yan Ng, in recognition of his tireless work to support UCL.

Andrew, who graduated from the UCL Laws LLB programme in 1985, has been the Chairman of the UCL Hong Kong Alumni Club since 2005, during which time the alumni community has gone from strength to strength.

The Hong Kong Alumni Club is heavily involved with student recruitment, and organises regular receptions and dinners for UCL Alumni. Andrew has also worked hard to raise funds for scholarships and prizes for UCL students, and in 2010 was elected Governor of the UCL Scholarship Foundation Ltd, which recently raised over HK$1 million for the Sir Malcolm Grant Scholarship.

During the afternoon LLB ceremony, graduands were joined by special guest, Mayor of London, Boris Johnson. Following a rousing speech by the Mayor, the LLB class of 2014 received their awards alongside the recipient of a UCL Honorary Doctorate, Stephen Rubin OBE.

After completing his LLB degree at UCL Laws in 1958, Stephen trained as a barrister before entering the family business, the Liverpool Shoe Company Ltd. Since then, the business, Pentland Group plc, has become one of the UK’s leading family-owned group of companies, and trades in over 200 countries globally.

Stephen is a dedicated humanitarian, and has supported the UCL Human Rights Institute and was the founding sponsor of the UCL School of Public Policy. His award of Doctor of Science Honoris Causa is in recognition of his achievements as a business innovator, commitment to human rights and philanthropy.

This year was also the first year that the Excellence Awards for Legal Teaching (EXALT) were awarded in recognition of UCL Laws staff who have made an outstanding contribution to undergraduate teaching and support the student experience. The winners of the 2014 EXALT Awards included Dr Nicola Countouris, Dr Matt Fisher, Professor Charles Mitchell and Ms Olga Thomas. The EXALT Awards are made on the basis of student feedback and a popular vote.

Commenting on the day, Dean of UCL Laws, Professor Dame Hazel Genn said: “There are few occasions in the academic calendar as uplifting as graduation. After all the hard work of the past few years, this is an opportunity for family members, peers, the staff of UCL Laws and distinguished guests to come together to recognise the achievements and success of our students.

We have also had the opportunity to confer honours on two exceptional individuals who have both contributed to the life and work of UCL Laws, and to pay tribute to their achievements and commitment to UCL.”