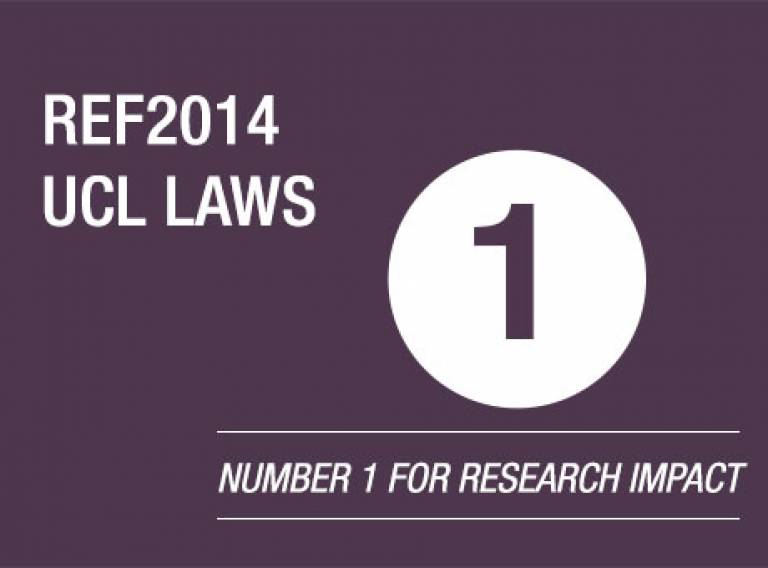 A new feature of the REF2014 exercise is that law school research is now judged on the impact it has outside of academia, and recognition is given to research that engages with and influences society, business, government and the law.

Research by members of the UCL Laws Faculty has been rated as having the highest real world impact amongst all law faculties in England, with 87% of UCL Laws’ research rated as having 4* world-leading impact in the real world.

Professor Dame Hazel Genn, Dean of UCL Laws, said: “I am especially pleased that our longstanding reputation for high-quality legal research with real world impact has been acknowledged in the REF2014 exercise.

“UCL Laws has pioneered legal research that provides a clear evidence base for changes in the law. Our research has had far-reaching influences on the development of government policies, national and international laws and legal principles, and contributed to improvements in justice policy, court procedure and legal practice, as well as public debate and understanding of the law and legal rights.”

UCL Laws research that was singled out for its real world impact includes ground-breaking work on the legality of torture, access to justice, environmental sanctions, online legal transcription, trial by jury and the appointment and training of judges.

Professor Cheryl Thomas, UCL Laws REF2014 Lead, said: “The reality of publicly-funded research in the 21st century is that it must have relevance to the wider world outside of academia.

“Research at UCL has made a real and lasting contribution to a wide range of critical social issues, from citizens’ access to courts and justice to the legality of torture of terrorist suspects, effective sanctions against environmental polluters and how to choose the best judges and ensure trial by jury in the internet age.”