A Song of Good and Evil premiered at the Southbank Centre

A Song of Good and Evil, an original project by Professor Philippe Sands QC was premiered to a sell-out audience at the Southbank Centre on Saturday 29 and Sunday 30 November 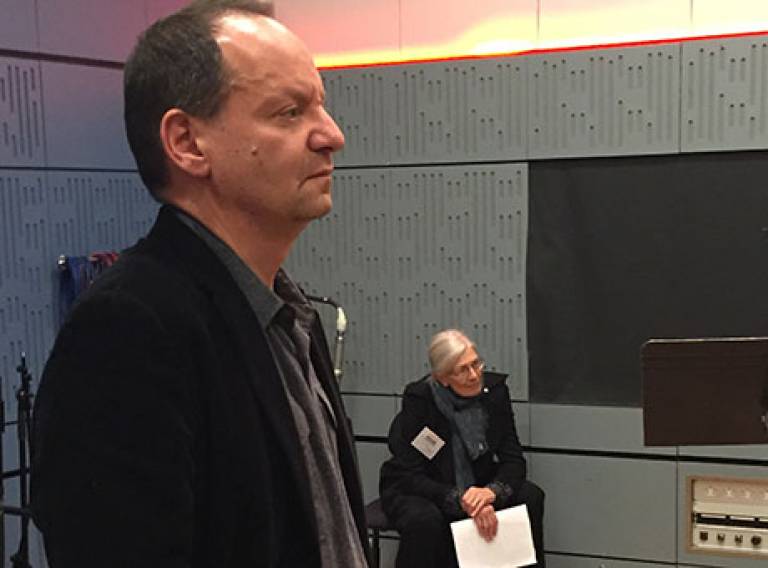 Performed by Philippe with actress Vanessa Redgrave, bass-baritone Laurent Naouri, pianist Guillame de Chassy, and directed by Nina Brazier, A Song of Good and Evil is, according to Philippe himself, “a very personal exploration of the origins of modern humans rights law”.

It tells the stories of three men at the heart of the Nuremberg trials: the Cambridge academic Hersch Lauterpacht, prosecutor Raphael Lemkin, and the defendant, Hitler’s lawyer, Hans Frank, uncovering the connections and conflict between them through the passion for music they shared.

After exploring the archives and personal correspondence of the three men during the research for a book about his own family, Philippe came across a startling coincidence: both Lauterpacht and Frank sought relief from the trial in the music of the St Matthew Passion by Johann Sebastian Bach.

Speaking to Kirsty Lang on BBC Radio 4’s Frontrow, Philippe explains: “All of a sudden, the light started blinking. How could it be that the prosecutor and the defendant, in the same room, found solace in the same musical space?”

Through his research, Philippe also discovered another strange connection between the three men, and indeed himself: the city of now known as Lviv.

Briefly occupied by Ukraine, Poland, Germany and the Soviet Union since the end of the First World War, the city was known as Lemberg, Lwów, L’vov as well as Lviv.

Philippe’s maternal grandfather was born there and Lauterpacht grew up in the city, while his colleague, Lemkin studied at its university during 1920s. Frank meanwhile, had visited Lviv – then known as Lemberg – in 1944 to announce that the so-called ‘Jewish problem’ was about to be solved.

“The people swept up in what he [Frank] announces are the families of Lauterpacht and Lemkin,” Philippe continues.

“So the city of Lemberg, Lwów, Lviv, plays a very central role in the whole story, and of course it’s a very important city today, because it’s the home of Ukrainian nationalism.”

Combining narrative, images and music, A Song of Good and Evil also reflects the philosophical debate about the concepts of crimes against humanity and genocide, and the differing views between the two Nuremberg prosecutors.

Following its London premier, A Song of Good and Evil will be performed in Stockholm on 14 January 2015, Nuremberg in June, and Montauban in November. Philippe Sands’s new book will be published by Alfred Knopf in 2016, and his film, made by Wildgaze with BBC Storyville, will be released next year.

More about A Song of Good and Evil

Interview with Ed Vulliamy in The Observer: ‘The Nazi war criminal, the Nuremberg prosecution expert… and a shared love of Bach’

Interview with Matthew Reisz in Times Higher Education: ‘A Song of Good and Evil, by Philippe Sands’