Recording | Chokepoint Capitalism: Can It Be Defeated? 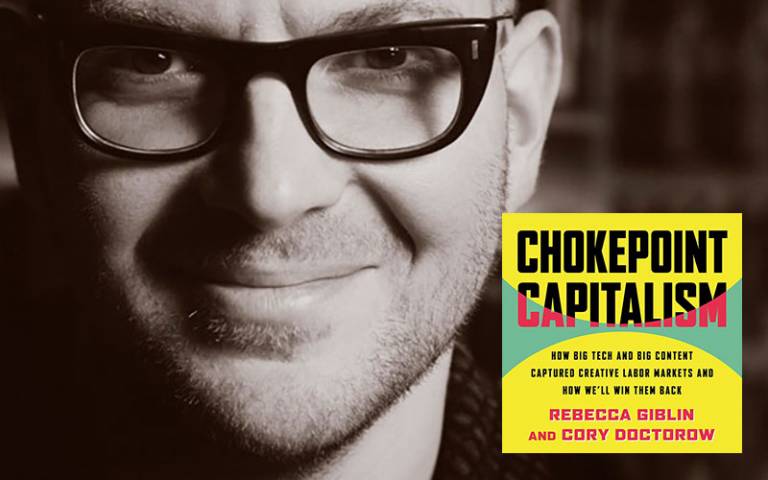 Chokepoint Capitalism: Can It Be Defeated?
An online Public Lecture by Cory Doctorow

The prolific Cory Doctorow almost needs no introduction, but here is one anyway…

An Anglo-Canadian author, blogger, award winning novelist and high profile supporter of the Tor network, Doctorow is known for his views on liberalising copyright law, use of Creative Commons licensing and trenchant criticisms of DRM.

For a time European Affairs Coordinator for the Electronic Frontier Foundation (EFF) Doctorow worked out of London helping establish the Open Rights Group.  He left EFF to write full-time in 2006 when he was named the 2006–2007 Canadian Fulbright Chair for Public Diplomacy at the USC Center on Public Diplomacy which jointly sponsored the post with the Royal Fulbright Commission and The Integrated Media Systems Center.   The professorship included a one-year writing and teaching residency at the University of Southern California in Los Angeles.

Doctorow had begun writing fiction when he was 17 years old, selling several stories, most notably Craphound in 1998.  In 2003 his first novel, Down and Out in the Magic Kingdom, was published in what was to become Doctorow’s characteristic mode: simultaneously releasing print and electronic editions; the latter subject to what was one of the earliest Creative Commons licences.

To date Doctorow has written 12 novels, over 20 fiction and collections of works; 2 graphic novels, and a wide ranging body of non-fiction work.  The latter category includes The Complete Idiot’s Guide to Publishing Science Fiction, Essential Blogging, You Can’t Own Knowledge, How to Destroy Surveillance Capitalism, Ebooks: Neither E nor Books, and Information Doesn’t Want to be Free.

Doctorow’s latest work, co-authored with the respected copyright scholar Professor Rebecca Giblin from Melbourne Law School, is Chokepoint Capitalism.  Published in November 2022 it is promoted as an examination of the manner in which competition, supposedly fundamental to capitalism, has been hijacked to the detriment of creators everywhere.  Chokepoint Capitalism points out how over the last four decades, thanks to the so-called Chicago School, “greedy robber barons” have worked out how to lock in customers and suppliers; how to eliminate competitors so as to shake down everyone, creators, producers and consumers alike.

Doctorow and Giblin demonstrate how Google, Facebook, Spotify, the big three record companies, the big five (still, thanks to the US DOJ’s rejection of the proposed Random House/Simon Schuster merger) book publishers, and Amazon amongst others, have locked in artists and producers.  These behemoths use that dynamic duo, Monopoly and Monopsony, to eliminate competition, and extract far more than their fair share of revenues from creative labour.

This is a rare opportunity to hear Doctorow expound on these ideas and suggest how the situation might be corrected.  He may even take questions…….

The London audience on February 1st 2023 should not be offended that Doctorow has colourfully and memorably described London as “a city whose two priorities are being a playground for corrupt global elites who turn neighbourhoods into soulless collections of empty safe-deposit boxes in the sky, and encouraging the feckless criminality of the finance industry. These two facts are not unrelated”.

This assessment did not stop Doctorow becoming a naturalised Brit in 2011 and UCL’s Institute of Brand and Innovation Law is delighted to welcome him back to our corner of the playground.

Queries:
If you have any queries about this event please email lisa.penfold@ucl.ac.uk