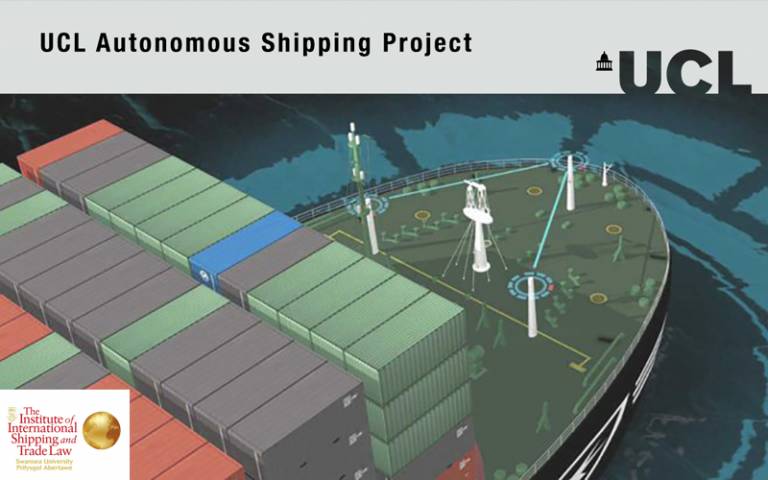 A half-day conference organised by UCL Autonomous Shipping Project with The Institute of International Shipping and Trade Law, Swansea

Last October UCL and Swansea’s Institute of International Shipping and Trade Law (IISTL) co-hosted an in-person event on the civil and commercial law aspects of autonomous shipping. On 6 April (Wednesday) we will be holding a complementary session, this time on the public international law aspects of the debate. As before, the event will be held at UCL (London) 1- 5 pm

Autonomous ship operations are on the rise. In this vein, autonomous technology in international shipping seems poised for a future commercial breakthrough. Yet autonomous ship operation causes legal awkwardness, since most international (shipping) conventions and domestic legislation has hitherto taken it for granted that all vessels have a master, officers, and crew on board, and is often difficult to apply to those that do not. There are large numbers of public (international) law requirements, especially those arising under the 1982 Law of the Sea Convention, or under the complex congeries of conventions emanating from the IMO, that are difficult or impossible to square with autonomous operations. There is a need to tidy up the relevant legal framework. To this end, we have brought together a very distinguished group of scholars, practitioners and shipping professionals to discuss the complex public (international) law and technical issues surrounding the use of autonomous vessels at sea.

The schedule
About the speakers

Professor Simon Baughen was appointed as Professor of Shipping Law in the Department of Shipping and Trade Law at Swansea University in September 2013. He had previously been a Reader at the University of Bristol Law School where he had worked since joining academia in 1989. Simon Baughen studied law at Oxford and practised in maritime law from 1979 to 1988. His research interests lie mainly in the field of shipping law in which he has written extensively over the last thirty years. He is the author of ‘Shipping Law’, now in its seventh edition, and took over authorship of ‘Summerskill on Laytime’ in 2013 for its fifth edition; the sixth edition was published in Autumn 2017 and the seventh edition is due out in autumn 2022.

He also researches in the field of the interaction between free trade/investment and environmental protection and human rights. He has produced two books on this topic. ‘International Trade and the Protection of the Environment’ in 2007 and ‘Human Rights and Corporate Wrongs. Closing the Governance Gap?’ in 2015. The latter was cited in the judgment of the Supreme Court of Canada in Nevsun v Araya in February 2020.

Luci Carey
Luci Carey is a Teaching Fellow in Commercial Law at teh University of Edinburgh. Luci obtained her LLB (Hons) degree in 2015 from Murdoch University in Western Australia and her LLM (Maritime Law) from the National University of Singapore in 2019. She is an admitted lawyer in the State of Western Australia. Prior to joining the University, Luci was a Research Associate with the Centre for Maritime Law, National University of Singapore. Before joining academia, Luci was Research Associate to the Honourable Justice Carmel McLure AC, President of the Court of Appeal, Supreme Court of Western Australia. Luci teaches a variety of commercial law subjects and  has a particular interest in Shipping Law especially in relation to the development of autonomous shipping.

Melis is the specialism convenor for maritime law studies at UCL, and she is the director of UCL Centre for Commercial Law. Melis has published extensively in the areas of international trade law, carriage of goods by sea, international commercial arbitration and conflict of laws and jurisdiction.

Melis is the founder of the UCL Autonomous Shipping Project, which was launched in a bid to start an open and diverse debate on the future of autonomous shipping from a legal perspective. The project has a website (https://ucl-autonomous-shipping.org). She is currently researching the legal implications of autonomous shipping and has a journal article on the topic published in the Industrial Law Journal. Melis is also a member of the CMI’s (Comite Maritime International) International Working Group on Unmanned Vessels.

Professor Soyer directs the Institute of International Shipping and Trade Law at Swansea University, and is a member of the British Maritime Law Association and British Insurance Law Association. He is the author of Warranties in Marine Insurance (2001) (winner of the BILA Book prize in 2002), Marine Insurance Fraud (2014) (winner of the same prize in 2015), and has written numerous articles published in journals including the Cambridge Law Journal, the Law Quarterly Review, Lloyd’s Maritime & Commercial Law Quarterly, the Edinburgh Law Review, and the Journal of Business Law. He has also edited large numbers of collections of essays on commercial, maritime and insurance law. In addition, he sits on the editorial boards of Journal of International Maritime Law, Shipping and Trade Law and the Baltic Maritime Law Quarterly and editorial committee of the Lloyd’s Maritime and Commercial Law Quarterly (International Maritime and Commercial Law Yearbook). He currently teaches Charter Parties and Carriage of Goods by Sea and Marine Insurance on the LLM Programme and also is the director of Commercial, Maritime and International Trade LLM Programmes.

Cdr Tuckett joined the Royal Navy as a Logistics Officer in 2006, having read Latin and Ancient History at the University of Edinburgh. Her first assignments were in HMS NOTTINGHAM and then HMS ARGYLL as the Deputy Logistics Officer, with deployments to the South Atlantic, South America and the Mediterranean.

Having been selected for the Naval Legal Service, she completed 2 years’ of academic training at UWE, Bristol and then a pupillage in Colleton Chambers, Exeter. Her first legal assignment back in the Service saw her in an advisory role, where the range of offences went from minor disciplinary action up to murder.  From there, she went on to become the Legal Adviser to 3 Commando Brigade Royal Marines, covering a portfolio of both disciplinary matters and operational law, with a couple of deployments to the Mediterranean. An assignment as the Logistics Officer in HMS SUTHERLAND followed, predominantly spent on national tasking conducting anti-submarine patrols in the North Atlantic.

In 2018, Cdr Tuckett deployed to the United Kingdom Maritime Component Command (UKMCC) in Bahrain as the Legal Adviser for both UKMCC and the Combined Maritime Force.  Providing legal advice to the UK elements and a coalition of 32 nations, she advised on over 100 counter-narcotics boardings in 10 months. During this period, she also worked closely with the US Navy JAG Corps in 5th Fleet.

In 2020 Cdr Tuckett became the lead legal adviser in International and Operational Law within the RN. A current focus in her work is the applicability of international maritime law to the military operation of un-crewed vessels. She has also completed a Masters by Research in International Law through the University of Exeter, exploring the legal issues of sub-threshold operations in the maritime environment.

Dr. Youri van Logchem is a senior lecturer at the Institute of International Shipping and Trade Law at Swansea University. He teaches both at the postgraduate and undergraduate level, primarily in the areas of international law of the sea and general public international law. Before that, he was a PhD fellow at the Netherlands Institute for the Law of the Sea (NILOS) at Utrecht University, where he wrote his PhD thesis.

Youri’s work has been cited before international courts and tribunals. He has also received awards for academic achievements, including the Rhodes Academy Submarine Cables Award, and has presented at various conferences around the world. Youri has provided evidence as an expert witness for the International Relations and Defence Committee of the House of Lords.

Tom joined HFW in 2002, and qualified in 2004 into the Admiralty Casualty Response team. In addition to a number of high profile salvage and marine litigation cases, Tom has worked on a number of complex technical cases in the offshore oil & gas industry dealing with; construction disputes involving jack up and semi-submersible rigs, decommissioning and disposal of marine assets, insurance claims, towage disputes involving the transportation of various offshore units, contractual disputes involving pipe laying vessels, the salvage of several semi-submersible platforms in the Gulf of Mexico after hurricanes Dennis and Katrina, and the “Deepwater Horizon” incident.

In-Person tickets are limited and we will open online tickets after 20 March.

Book your place at: https://autonomous-shipping-2-public-law.eventbrite.co.uk

This is an in-person event with limited number of tickets. UCL requires all attendees to wear face masks in our buildings, including in the lecture theatre. If you are exempt from wearing a mask please ensure that your bring your printed government exepmption card with you to show at security.

If you are not able to attend the event you can cancel your place and receive a full refund up to 5 working days before the conference.

If you have any queries about this conference please email the UCL Laws Events team - laws-events@ucl.ac.uk