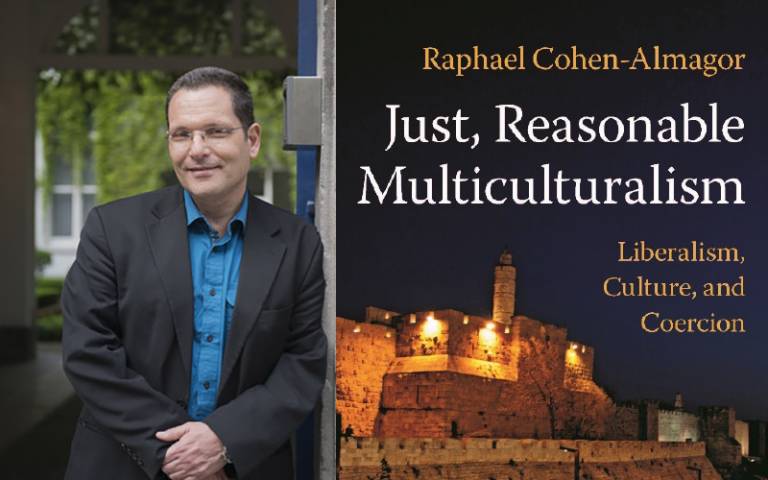 The main thesis is that liberalism and multiculturalism are reconcilable provided that a fair balance is struck between individual rights and group rights. It is argued that reasonable multiculturalism can be achieved via mechanisms of deliberate democracy, compromise and, when necessary, coercion. Placing necessary checks on groups that discriminate against vulnerable third parties, commonly women and children, the approach insists on the protection of basic human rights as well as on exit rights for individuals if and when they wish to leave their cultural groups.

Raphael completed his DPhil in Political Theory at St. Catherine’s College, University of Oxford, where he worked with Geoffrey Marshall, Wilfrid Knapp and Isaiah Berlin. He is now Professor and Chair of Politics, University of Hull. Raphael taught, inter alia, at Oxford (UK), Jerusalem, Haifa (Israel), UCLA, Johns Hopkins (USA) and Nirma University (India). He was also Senior Fellow at the Woodrow Wilson International Center for Scholars, Washington DC, and Distinguished Visiting Professor, Faculty of Laws, University College London. He is the founder of Israel’s “Second Generation to the Holocaust and Heroism Remembrance” Organization, The University of Haifa Center for Democratic Studies, The Van Leer Jerusalem Institute Medical Ethics Think-tank, and The University of Hull Middle East Study Group. Raphael has published extensively in the fields of politics, philosophy, media ethics, medical ethics, law, sociology and history. His main books are: The Boundaries of Liberty and Tolerance (1994), The Right to Die with Dignity (2001), Speech, Media and Ethics (2001, 2005), Euthanasia in The Netherlands (2004), The Scope of Tolerance (2006, 2007), The Democratic Catch (2007), Confronting the Internet's Dark Side (2015), and Just, Reasonable Multiculturalism (2021). He Is now working on Resolving the Israeli-Palestinian Conflict: A Critical Study of Peace Mediation, Facilitation and Negotiations between Israel and the PLO (forthcoming 2023). https://www.amazon.co.uk/Raphael-Cohen-Almagor/e/B001HPMUFU
About the speakers

After reading chemistry at Oxford and then spending three years as an investment banker, David Neuberger was called to the Bar in 1975 and practised largely in property law, taking silk in 1987. He was appointed a High Court Judge, sitting in the Chancery Division, in 1996, and was Supervisory Chancery Judge for Midland, Wales and Chester and Western Circuits from 2001. In 2004, he was made a Lord Justice of Appeal, and a Privy Counsellor. In the same year, he was appointed Judge in charge of IT and modernisation. In 2007 he was promoted to be a Law Lord and became a peer. He was appointed Master of the Rolls in 2009. In 2012, he became the President of the United Kingdom Supreme Court, a position from which he retired in 2017. In 2018, he started practising as an arbitrator and legal expert from One Essex Court in the Temple, London.

Since 2010, Lord Neuberger has been a Non-Permanent Judge of the Hong Kong Court of Final Appeal and since 2018 a judge of the Singapore International Commercial Court. He was Treasurer of Lincoln’s Inn in 2017. He is an honorary Fellow of the Royal Society, and an honorary member of the Royal Institution of Chartered Surveyors. He also chairs the High Level Panel of Legal Experts on Media Freedom. He was on the Board of the University of the Arts London from 2001 to 2010, and was a trustee, and then chairman, of the Schizophrenia Trust from 2000 to 2012. He is a trustee of MHRUK, a mental health research funding trust, and of Prisoners Abroad, and patron of Sapere, a children’s educational trust. He was chair of the Magna Carta Trust 2009-2012. He chaired an investigation for the Bar Council into widening access to the barrister profession in 2006-2007, and also served on the panel on fair access to the professions in 2008-2009.

Avrom Sherr leads the operation of the Independent Peer Review of legal aid work in England and Wales.  He was Deputy Dean of the School of Advanced Legal Studies from 2011 to 2012 and Director of the Institute of Advanced Legal Studies from 2004 to 2014. From 1995 he was the founding Woolf Professor of Legal Education, a research chair.  He set up the first Research Ethics Committee at the University of London School of Advanced Study in 2009-10 and was the Chair of that Committee for its first three years. He taught at the University of Warwick for 16 years, and was the first Alsop Wilkinson Professor of Law at the University of Liverpool. He qualified as a solicitor in 1974 and worked in commercial litigation at Coward Chance till 1980.  From 1988 to 2012 he was also Director of Training at Macfarlanes.

Avrom Sherr's main research interests have been the provision of legal services, the development of legal education, the legal profession and ethics in professional work. He has also written in the areas of freedom of protest, discrimination relating to AIDS/HIV, issues of welfare rights provision within health care and carried out projects on On-line Dispute Resolution. He is the principal architect of the system of assessment of legal competence of legal aid lawyers known as Independent Peer Review. Since 2002 this has been used as the system for assessment of the quality of Legal Aid work in the UK, ensuring the quality of legal services received by the public.

He is the founding Editor of the International Journal of the Legal Profession, was the project leader producing the seminal report "Willing Blindness" on regulation of the legal profession, and has coordinated a number of trans-European projects on legal ethics, money laundering, legal and accountancy practitioner defaults and discrimination.  He was a member of the Lord Chancellor’s Advisory Committee on Legal Education and Conduct and of the Legal Services Commission Quality Assurance Working Group.  He was Chair of the Advisory Board & Strategy Committee of the UK Centre for Legal Education, Chair of the Advisory Committee of the Office of the Independent Adjudicator for Higher Education and is now again Chair of the Hamlyn Trust. He is also currently Chair of the Advice Quality Standards Project Committee. Recent work includes the Legal Education and Training Review, advising the Hong Kong Law Society on the future of qualification systems, advising the Legal Aid Board of Georgia and work with the National Legal Aid Centre of the Ministry of Justice in China. He currently also works with Save The Children  UK, Research and Assessment Ethics Committee.

His consultancy and research on law and policy has included leading and advising the Council of Europe on Legal Aid legislation and implementation for Armenia, Azerbaijan

Myriam Hunter-Henin is Professor in Comparative Law and Law & Religion at the Faculty of Laws at University College London. After graduating in Law both in France and England, she completed her DPhil at Paris I Panthéon-Sorbonne University (Paris, France) on personal status, leading to a monograph (Pour une redéfinition du statut personnel, PUAM, 2004, awarded the Dennery Prize) which explored the impact of fundamental rights and recognition approaches on the reasoning of Private International Family Law. Myriam has mainly taught on comparative law, family law, law & religion and human rights, first at Panthéon-Sorbonne University (Paris, France) where she was a research and teaching fellow and subsequently at the Faculty of Laws at University College London, where she was consecutively appointed as lecturer, Senior lecturer, Reader and from October 2021, Professor. She was also invited to Libera Università Internazionale degli Studi Sociali Guido Carli (LUISS) (Rome, Italy) to teach on the Summer 2020 Programme on Constitutional Law (moved to on-line setting) and to over 60 talks and keynote lectures in prestigious Universities and settings, such as the French Conseil d’Etat (2016).

Myriam has published extensively on the interaction and tensions between law and religion, issues of religious discrimination and French secularism (laïcité). Her main publications include: Law, Religious Freedoms and Education in Europe, Ashgate 2011; “Why the French Don’t Like the Burqa: Laïcité, National Identity and Religious Freedom”, International Comparative and Law Quarterly, vol 61, August 2012 pp 1–27  (selected as the basis for the annual ICLQ lecture 2013); “Living together in an age of religious  diversity: Lessons from Baby Loup and SAS”, Oxford Journal of Law and Religion 2015, 1-25; “English Schools with a Religious Ethos: For a Re-Interpretation of Religious Autonomy”,  Religion and Human Rights, 2018 (13), 3-26. More recently, Myriam has researched the connections between religious freedom/religious discrimination and democracy, which led to a new monograph: Why Religious Freedom Matters for Democracy. Comparative Reflections from Britain and France for a democratic ‘vivre ensemble’, Hart, Comparative Public Law Series, (2020) and article, “Religious Discrimination and Religious Freedom: Democracy as the missing link”, International Journal of Discrimination and the Law, 2021 (forthcoming).