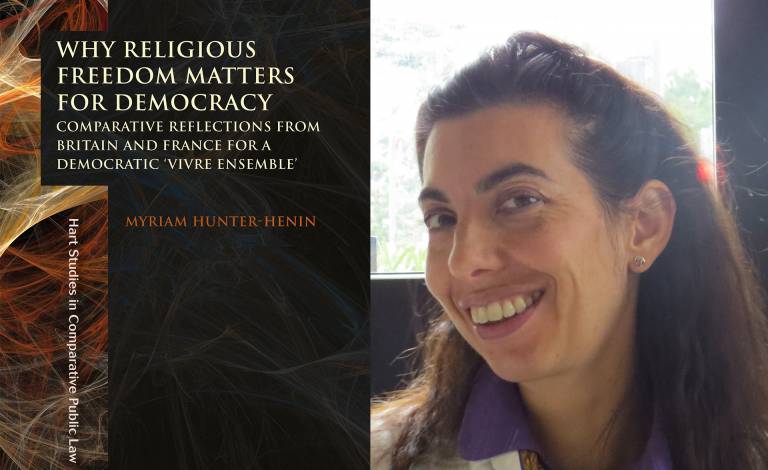 This event has been organised by UCL Laws

About this book launch:

Should an employee be allowed to wear a religious symbol at work? Should a religious employer be allowed to impose constraints on employees’ private lives for the sake of enforcing a religious work ethos? Should an employee be allowed, on religious grounds, to refuse to work with customers of the opposite sex or of a same-sex sexual orientation? Through a comparative analysis of French and English solutions, this book explores how judges decide these issues and defends a democratic approach, which fills a gap in the literature and highlights the vital connections between religious freedom, pluralism and democracy.

Leading scholars will provide critical comments on the book followed by a response by the author. We will be joined by:

Prof. Sir Malcolm Evans is Professor of Public International Law and Human Rights in the Law School at the University of Bristol. He has written on religious freedom and neutrality, focussing particularly on the jurisprudence of the European Court of Human Rights, and was formerly a member of the OSCE Advisory Council on Freedom of Religion or Belief.

Dr Oliver Gerstenberg is Associate Professor in EU Law in the Faculty of Laws at University College London. He has recently published a monograph on European constitutionalism and serves as a member of the advisory council of the European Law Institute project on Fundamental Constitutional Principles.

Dr Myriam Hunter-Henin is Reader in Law and Religion and Comparative Law in the Faculty of Laws at University College London. Her research addresses the interaction and tensions between law and religion in a comparative perspective.

Prof. Cécile Laborde is the Nuffield Professor of Political Theory at the University of Oxford, and a Fellow of the British Academy. She has published on republicanism, liberalism and religion, theories of law and the state, and citizenship and global justice.

Prof. Ronan McCrea is Professor of Constitutional and European Law in the Faculty of Laws at University College London. His research deals with issues on comparative constitutional law, European Union law and public law with a particular emphasis on the future of the European Union and on the relationship between law and religion in liberal democracies.

Prof. Horatia Muir Watt is tenured Professor at Sciences Po Paris, where she is Co-Director of the programme Global Governance Studies. She is a Member of the Institute of International Law and of the Institut Universitaire de France. Her research lies in International private law (in global governance); Comparative law (new approaches) and Fundamental rights and freedoms.

Prof. Julian Rivers is Professor of Jurisprudence in the Law School at Bristol University. His research interests lie in Legal and Constitutional Theory, Public Law, Law and Religion. His publications explore the connections between religious freedom, equality laws and Liberal Constitutionalism.

Prof. Lucy Vickers is Professor of Law at Oxford Brookes University. Her main research area is the protection of human rights within the workplace and non-discrimination law.