Baroness Hale: This is Your Life 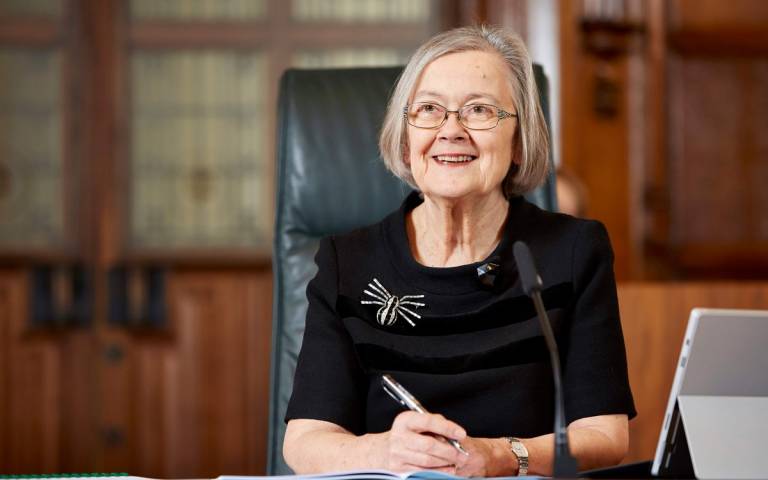 Baroness Hale: This is Your Life
Interviewed by Professor Dame Hazel Genn

You are invited to a special event in which Professor Dame Hazel Genn will explore with Baroness Hale the highlights of her career to date and her thoughts on the future.

This event will be looking in particular at the importance of the judiciary for equal societies, how we can tackle structural inequalities and will reflect on:

This event will be delivered on Zoom Webinar.
During the webinar audience cameras and microphone will be turned off but you will be able to ask questions in the Q&A function.

As an honorary professor at UCL, Baroness Hale plays a part in research, teaching, and public engagement in the Faculty of Laws, particularly in her areas of interest such as women’s rights, access to justice, and the rule of law.

Baroness Hale retired in early 2020 as President of the UK Supreme Court, the United Kingdom’s most senior judge. She was educated at Richmond High School for Girls in North Yorkshire and Girton College, Cambridge (where she is now Visitor) and was called to the Bar by Gray’s Inn in 1969. She taught Law at Manchester University for 18 years, specialising in family and social welfare law, and also practised for a while at the Manchester Bar.

In 1984 she became the first woman to serve on the Law Commission, a statutory body which promotes the reform of the law. There she led the work which resulted (among others) in the Children Act 1989 and the Mental Capacity Act 2005. She was also a founder member of the Human Fertilisation and Embryology Authority and chair of its Code of Practice Committee from 1990 to 1994. In 1994, she was appointed a Judge of the Family Division of the High Court and promoted to the Court of Appeal of England and Wales in 1999. In 2004 she became the first woman ‘Lord of Appeal in Ordinary’ in the House of Lords, which was then the top court for the whole United Kingdom. In 2009, she transferred with the other ‘Law Lords’ to become a Justice of the newly established Supreme Court of the United Kingdom. She became Deputy President of the Court in 2013 and its President in 2017.

This event is co-organised by