The Implementation Committee of the Water Convention 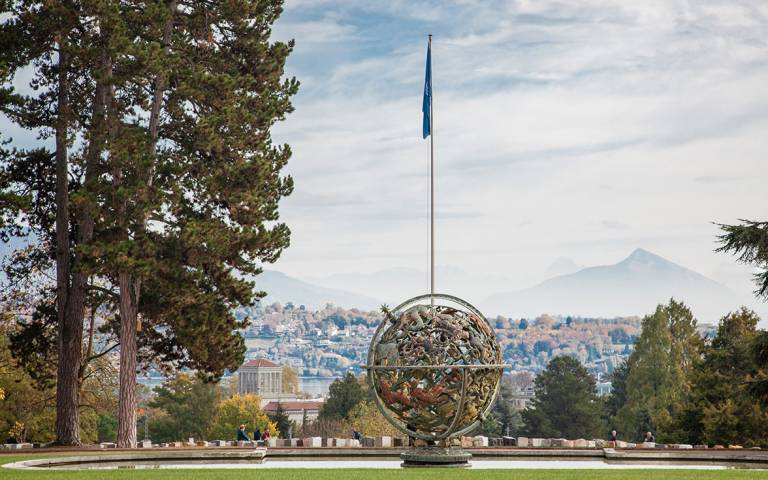 The Convention on the Protection and Use of Transboundary Watercourses and International Lakes (Water Convention) is a unique legal and intergovernmental platform which promotes sustainable use of transboundary waters. The Convention’s Implementation Committee, comprising lawyers and water management professionals, provides tailored assistance to facilitate better understanding, implementation and application of the Convention.

The event will highlight the mechanisms available for Committee’s support to the countries, in particular the advisory procedure, which distinguishes the Committee from other similar mechanisms and enables it to engage with countries seeking to resolve water issues in a non-confrontational manner.

Catherine Brölmann is an associate professor of law at the University of Amsterdam, Amsterdam Center for International Law, and a visiting professor at Lyon III University. She is a vice-chair of the Advisory Committee for public international law of the Netherlands government, and co editor-in-chief of the OUP repository Oxford International Organizations (OXIO). Catherine has published widely on subjects of international law, including law and governance of water resources (see for example European Society of International Law, ‘Sustainable Development Goal 6 as a Game Changer for International Water Law’, Reflection Vol. 7, Issue 5, 2018). As an expert she has participated e.g. in the closed consultations for the preparation of the 2018 UN General Assembly Report by the Special Rapporteur on the human rights to safe drinking water and sanitation, OHCHR Geneva.

Professor Malgosia Fitzmaurice holds a chair of public international law at the Department of Law, Queen Mary University of London (QMUL). She specialises in international environmental law; the law of treaties; and indigenous peoples. She publishes widely on these subjects. In 2020, Professor Fitzmaurice has published (with Professor Panos Merkouris) a book Treaties in Motion: The Evolution of Treaties from Formation to Termination (Cambridge University Press, 2020). Her publications also include a monograph Whaling and International Law, Cambridge University Press, 2015 and (co-edited with Dai Tamada) Whaling in Antarctic: Significance and Implications of the ICJ Judgment, Brill/ Nijhoff, 2016.

Ximena Fuentes, D.Phil. (Oxon) is an Associate Professor of Public International Law at the University of Chile. Since 2015 she serves as the National Director of Boundaries and Border Areas of the Chilean Ministry of Foreign Affairs. She is the Agent of the Republic of Chile in the case concerning the Status and Use of the Waters of the Silala (Chile v. Bolivia) before the International Court of Justice. She acted as legal adviser of the Government of Chile before the ICJ in the Peru v. Chile Maritime Dispute case (2008-2014) and in the Bolivia v. Chile case regarding An obligation to negotiate access to the Pacific Ocean (2013-2018). She is Vice-President of the Chilean Society of International Law. She was Co-Rapporteur of the Committee on International Law on Sustainable Development of the International Law Association (2003-2012). She wrote her D.Phil thesis on The criteria of equitable utilization of international watercourses in general international law, which served as the basis for her articles Sustainable Development and the Equitable Utilization of International Watercourses (1998) and The Criteria for the Equitable Utilization of International Rivers (1996), published in the British Yearbook. She has also participated in investor-State arbitrations (ICSID cases) as off Counsel at Chilean law firm Álvarez Hinzpeter Jana in the following arbitrations: Vieira v. Chile, Quiborax v. Bolivia and Flughafen Zurich v. Venezuela.

Dr Sonja Koeppel, originally from Germany, has been working for more than 10 years in the secretariat of the Convention on the Protection and Use of Transboundary Watercourses and International Lakes (Water Convention), serviced by the United Nations Economic Commission for Europe (UNECE) in Geneva. She is currently secretary to the Convention and was previously coordinating the activities on climate change adaptation under the Convention and servicing different Convention bodies. She also leads the activities on the global opening of the Convention to all United Nations Member States. Before joining UNECE, she worked for UNEP in Nairobi for a short while and studied environmental sciences, policy and management in Budapest and Manchester as well as social sciences in Bordeaux and Stuttgart.

Péter Kovács is Head of River Basin Management and Water Protection unit in the Ministry of Interior, Hungary; the Head of Delegation to the International Commission for the Protection of the Danube River (ICPDR); and served as a President of ICPDR in 2019. Peter represents his country as EU Water Director. He was previously chair of the UN ECE Water Convention between 2015-18, and is now a vice-chair. He had an active role in the World Water Council Board as an Alternate Governor. He is also responsible for implementation of over 30 bilateral Memorandum of Understanding on Water Management Cooperation with non-neighbouring countries.

He started his professional career at a Regional Water Directorate and continued in an Environmental Inspectorate dealing mainly with water quality related issues in Hungary. Since 1997 he has had various policy-related positions in Hungarian ministries responsible for water management issues and has had an active role in international activities since his ministerial employment. In 2012 he was nominated as a plenipotentiary/governmental commissioner for six bilateral transboundary water commissions on behalf of Hungary and this work is ongoing. He was previously a State Secretary for Water in the Ministry of Rural Development (2012-13).  Peter holds a Dipl. Ing. in Civil Engineering (1988) from the Leningrad Technical University, St. Peterburg, Russia, and a diploma in Environmental Protection and Health from IHE Delft, now UNESCO-IHE. He has been a speaker at many courses including “International Visitor Leadership Program” in USA, “JICA Study Course on Industrial Pollution Control in Japan, “Environmental Issues and European Policies on Water Management” in Wageningen (The Netherlands), “Environmental and Water Resource Engineering” at the Imperial College London.

Attila M. Tanzi, Ph.D., is Chair of International Law at the University of Bologna; Associate Member 3VB Chambers, London. He has been Visiting Professor at Queen Mary University of London (2014-2016), Université Paris II-Panthéon Assas (2018), University of Vienna (2018-2019) and Université Paris Nanterre (2021). External Scientific Fellow at Max Planck Institute Luxembourg for International, European and Regulatory Procedural Law (2020). He is instructed by governments, international organisations and corporations on matters of international law. He has been counsel, advocate and arbitrator in inter-state and investor-state disputes. Currently a Member of the Permanent Court of Arbitration and a Conciliator at the OSCE Court of Conciliation and Arbitration. He is Chairman of the Implementation Committee of the of the UNECE 1992 Convention on Protection and Use of Transboundary Watercourses and International Lakes (2013 -). He has been Chairman of the Legal Board of the same Convention (2004-2012) and Chairman of the Compliance Committee of the 1999 UNECE Protocol on Water and Health (2007-2010).

Iulia Trombitcaia is an Environmental Affairs Officer at the secretariat of the Convention on the Protection and Use of Transboundary Watercourses and International Lakes (Water Convention) hosted by UNECE. In 2014–2019, at UNECE Environmental Performance Reviews (EPR) Programme, she coordinated seven EPRs and participated in 11 EPRs in the countries of UNECE region and beyond. In 2009–2013, she was servicing the Legal Board, the Core Group on Groundwater and the Implementation Committee of the Water Convention. In 2009–2013, she has led several UNECE projects related to water and environmental cooperation in Central Asia. Before joining UNECE, she has been working for the European ECO-Forum, representing environmental NGOs in negotiations on environment and sustainable development.

Sibylle Vermont : Biologist and negotiator. Deputy Head of the Section Global Affairs - Division of International Affairs of the Federal Office for the Environment of Switzerland. In charge of the international water policy : Swiss focal point and member of the Bureau and former chair of the Conference of the Parties of the Convention on the Protection and Use of Transboundary Watercourses and International Lakes. National focal point for the Ramsar Convention on Wetlands. Responsible for the international forest policy on forests, and a focal point for the United Nations Forum on Forests. At present heading the negotiations of an international legally binding instrument under the United Nations Convention on the Law of Sea on the conservation and sustainable use of marine biological diversity of areas beyond national jurisdiction.

Dr. Christina Voigt is a renowned expert in international environmental law and professor of law at the University of Oslo. Professor Voigt has published widely on legal issues of climate change, environmental multilateralism and sustainability and is a frequent speaker at international and national events. From 2009-2018, she also worked as legal adviser and negotiator for the Government of Norway in the UN climate negotiations.

Professor Voigt is currently co-chair of the Paris Agreement Implementation and Compliance Committee. She is also chair of the Climate Change Specialist Group of the IUCN World Commission on Environmental Law and a member of the IUCN Climate Change Task Force. For more information, please consult: https://www.jus.uio.no/ior/english/people/aca/chrisvo/

Dr Dinara Ziganshina is a deputy director at the Scientific Information Centre of Interstate Commission for Water Coordination (SIC ICWC) in Central Asia, a regional organisation that contributes to fostering transboundary water cooperation in the region through data, information and knowledge development and dissemination. Dr. Ziganshina earned her law degree from the Tashkent State Institute of Law (Uzbekistan, 2001), LL.M. in Environmental and Natural Resources Law from the University of Oregon School of Law (USA, 2008) and PhD in International Water Law from the IHP-HELP Centre for Water Law, Policy and Science under the auspice of UNESCO, University of Dundee (UK, 2012). In addition to her position at SIC ICWC, she also an Associate Professor at the Tashkent Institute of Irrigation and Agricultural Mechanization Engineers, where she teaches a postgraduate course in International and National Water Relations and Law. Dr. Ziganshina is a vice chair of the Implementation Committee under the UNECE Convention on the Protection and Use of Transboundary Watercourses and International Lakes.

Dr. Ziganshina has about 20 years’ experience working as a legal and policy expert in water resources management at national and transboundary levels and managing and coordinating regional projects in multi-stakeholder environments. The area of her research interest includes public international law, transboundary waters, institution-building, water diplomacy and security.

This conference is free of charge.
Book your place

The conference will be delivered on Zoom, due to the global pandemic. We recommend that you download the latest version of zoom to your device before the event. You will be receive your unique zoom link when you register for the conference. We will also send reminders 1 week, 1 day and 1 hour before the event starts.

Please email lisa.penfold@ucl.ac.uk if you have any queries about this conference.