POSTPONED: Special Advocates in the Adversarial System: A Panel Discussion 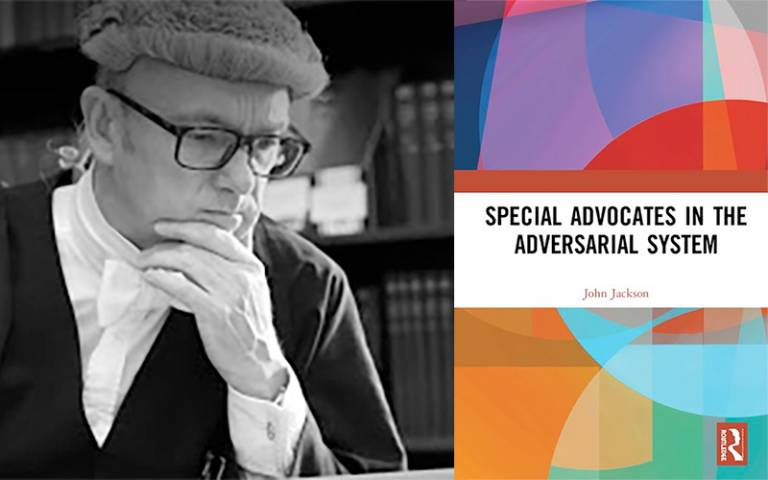 THIS EVENT HAS BEEN POSTPONED.

This event has been postponed due to the coronavirus. A new date for the event will be announced soon.

The last twenty years have seen an unprecedented rise in the use of “closed material proceedings” largely brought about in response to the need to protect intelligence sources in the fight against terrorism. This has called into question the commitment of legal systems to long-cherished principles of adversarial justice and due process. Foremost among the measures designed to minimise the prejudice caused to parties who have been excluded from such proceedings has been the use of “special advocates” who are given access to sensitive national security material and can make representations to the court on behalf of excluded parties.

In 2019 Professor John Jackson published a study – the first of its kind – analysing the professional services special advocates offer across a range of different types of closed proceedings. Drawing on extensive interviews with special advocates and with lawyers and judges who have worked with them, his book examines the manner in which special advocates are appointed and supported, how their position differs from that of ordinary counsel within the adversarial system, and the challenges they face in the work that they do. In making an assessment of the future of special advocacy, Professor Jackson argues that there is a need to reconceptualise the unique role that special advocates play in the administration of justice.

This event, hosted by the UCL Centre for Criminal Law in conjunction with 6KBW College Hill, will provide an opportunity to discuss some of the findings made by Professor Jackson in his ground-breaking study.  In a panel discussion moderated by Jonathan Hall QC, Professor Jackson will begin by outlining some of the key points derived from his study. The other panellists, who have extensive experience of national security litigation from a variety of perspectives, will then provide their views on the special advocate system and its relationship to the adversarial process.  Time permitting, there will an opportunity for the audience to ask questions.

A reception hosted by 6KBW College Hill will follow the event.

Jonathan Hall QC is a barrister practising from 6KBW College Hill and is ranked in Chambers and Partners 2019 and the Legal 500 2020 in the fields of POCA Work and Asset Forfeiture, and Administrative and Public Law. He is also ranked in the Legal 500 2018 in the field of Police Law. He has a wealth of experience handling unusual, sensitive or controversial matters, in the fields of asset recovery, mutual legal assistance, national security, human rights, confiscation, tax and duties, law enforcement, extradition, inquests and immigration, and wherever criminal law interfaces with public law. In May 2019, he was appointed by the Home Secretary as Independent Reviewer of Terrorism Legislation.

Tom Hickman QC, a barrister at Blackstone Chambers, is recognised as a leading barrister across a range of practice areas spanning Commercial, Media, Entertainment and Sport, EU law, Public Law and Regulatory Law, Procurement, Civil Liberties and Human Rights, Energy and Public International Law. Tom has a particular expertise in the area of national security law. He has acted in numerous leading cases in the context of terrorism and torture, including Binyam Mohamed v SSFCA [2010] EWCA Civ 65 & 158; AF (No 3) v SSHD [2010] 2 AC 269 and in Al-Jedda v Home Secretary [2014] AC 253. He has extensive experience in asset freezing, TPIM and control order proceedings involving closed material procedure. Since 2012 he has been a Reader at UCL, where he convenes the LLM course, Aspects of National Security Law.

Professor John Jackson is Professor of Comparative Criminal Law & Procedure at the School of Law at the University of Nottingham and is a qualified barrister. He was previously Dean of the School of Law at University College Dublin from 2008-2011 and before that he was Professor of Public Law at Queen's University Belfast from 1995 - 2008. He has also taught at University College Cardiff, the City University, London and the University of Sheffield. He has held visiting professorships at Hastings College of the Law, University of California and the Faculty of Law, University of New South Wales and was a Fernand Braudel Senior Fellow at the European University Institute in 2007 - 2008. From 1998 to 2000 he was an Independent Assessor for the Northern Ireland Criminal Justice Review and since 2008 he has been a Parole Commissioner for Northern Ireland.

Cathryn McGahey QC is a barrister at Temple Garden Chambers. She specialises in immigration, national security, prison law, public inquiries and inquests. She was junior counsel to the Bloody Sunday Inquiry from 2000 to 2010. She became a special advocate in 2008 and was appointed in 2012 to the Attorney General’s A Panel. Cathryn was appointed Queen’s Counsel in 2016. As a leading special advocate, Cathryn represented the only successful appellant in the Operation Pathway Manchester bomb plot case before the Special Immigration Appeals Commission (SIAC). As a junior special advocate, she appeared in a successful challenge to the Government’s proposed Deportation With Assurances of an Ethiopian national. Cathryn represented the Secretary of State in a challenge by three individuals, alleged to be leading members of the proscribed organisation Al-Muhajiroun, against the decision to impose TPIM notices on them.

Shaheen Rahman QC practises from One Crown Office Row and has a diverse practice with particular expertise in the areas of Public Law, Human Rights, Civil Liberties, Clinical Negligence and Professional Discipline. She has been recognised by the directories as a leader in these fields for many years. She undertakes a broad range of public law work with an emphasis on Prisons, Healthcare, Public Consultations and Religious Discrimination.  She is also an experienced Special Advocate, having been appointed in 2005, and has been described in Legal 500 as “a special advocate of choice”. She has appeared in many of the leading terrorism cases, including Belhaj & Boudchar v Jack Straw & Others [2017] EWHC 1861, an ongoing claim alleging complicity in extraordinary rendition and torture; SSHD v LG, IM & JM [2017] EWHC 1529, challenges to TPIMs by three alleged members of the proscribed organisation ALM; R (MR) v SSHD [2016] EWHC 1622, a challenge to the removal of the claimant’s passport under the Royal Prerogative on grounds of suspected terrorist activity; and R (Serdar Mohammed) v MOD [2014] 1 WLR 1071, proceedings seeking extended moratorium on transfer of UK detainees to Afghan authorities in view of risk of torture.

Sir Stephen Silber practised as a barrister from 3 Verulam Buildings for 25 years, specialising in commercial law. He was appointed Queen’s Counsel in 1987 and from 1994 – 1999 he was a Law Commissioner for England and Wales.  In 1999 he was appointed a Judge of the High Court (Queen’s Bench Division), receiving the customary knighthood. During this time, he sat in the Employment Appeal Tribunal, the Chancery Division, the Court of Appeal (Criminal Division) and occasionally in its Civil Division, and also presided over Disciplinary Panels concerning Barristers and Judges. He was a member of the Special Immigration Appeal Commission (SIAC) for 20 years and from 2009 – 2018 he was Vice-President of the Security Vetting Appeal Panel.  Since his retirement from the High Court in 2014 he has continued to sit as a part-time judge and, since 2017, he has been a Judicial Commissioner, assisting the Investigatory Powers Commissioner discharge his oversight functions.