Find out more about Judicial Institute events from 2019.

2019 was a year for reflection for the UK Supreme Court. It was celebrating its tenth anniversary, and witnessing a very substantial renewal of its membership from three years before. In acknowledgment of this the Court organised a number of events, including four lectures by Justices from each part of the United Kingdom and a moderated discussion with its first three Presidents. The Judicial Institute for its part invited Alan Paterson, author of Final Judgment: The Last Law Lords and the Supreme Court ( Hart Publishing, 2013 ) to give a lecture to an audience of  senior judges and other stakeholders, from his ongoing project on the Presidents of the UK Supreme Court, on 2nd December 2019 entitled, “Presidency and the Supreme Court: Lord Neuberger’s Legacy”. It is reproduced here.

Presidency and the Supreme Court Lecture 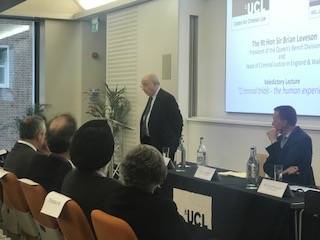 Panel discussion with The Hon Justice Christopher Maxwell President of the Court of Appeal, Supreme Court of Victoria, Australia

These comments were followed by a lively Q&A session in which both discussants were invited to expand on their opening comments and requested to opine on areas of particular controversy.

The UCL Judicial Institute runs various events and training courses around the subject of judicial studies - find out more about events from previous years, or check to see our upcoming events.