UCL Institute of Education (IOE) has been ranked as the world number one for education for the third year running, in the latest QS World University Rankings by Subject. 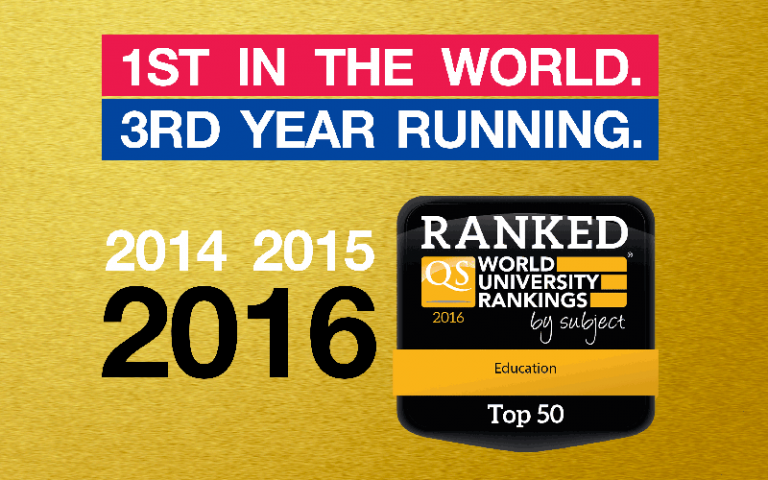 Professor Andrew Brown, Interim Director of the UCL Institute of Education, said of the announcement:

"I'm delighted that the high esteem in which the IOE's work is held internationally has been recognised for a third year in a row. This is an outstanding accolade, reflecting our excellence in research in education, its breadth and impact as well as the achievements of our alumni. Underpinning our research and teaching is a strong commitment to professional development in all phases of education and to improve lives through education. We pride ourselves on collaborations and on our close engagement and dialogue with stakeholders. This is vital in ensuring that our work brings about positive change for individuals, communities and societies around the world".

The QS World University Rankings by subject highlight the world's top universities in a range of subject areas, covering 42 subjects in 2016. Published annually since 2011, the rankings are based on academic reputation, employer reputation and research citations.

Being placed number one for the third year running in the QS subject rankings demonstrates that the IOE continues to lead in the field of education. In the most recent Research Excellence Framework (REF), 94% of the Institute's research was judged to be world-class. In 2014, the IOE was awarded 'outstanding' by Ofsted for all of its initial teacher training, across primary, secondary and further education, scoring top grades on every criteria and across every programme. The IOE was also shortlisted for Times Higher Education 'University of the Year' in 2014 and received the Queen's Anniversary Prize for Higher and Further Education for 2014-16.

UCL was ranked highly in the QS subject rankings for many other areas, with 16 subjects featuring in the top 20, including: Archaeology, Architecture/Built Environment, Dentistry, Medicine, Psychology and Geography.

The QS World University rankings - which rank universities overall, rather than at subject level - will be published later this year. In 2015, these rankings placed UCL at number 7 in the world.