IAS Laughter: A Feminist Laughter that Silences the Law? 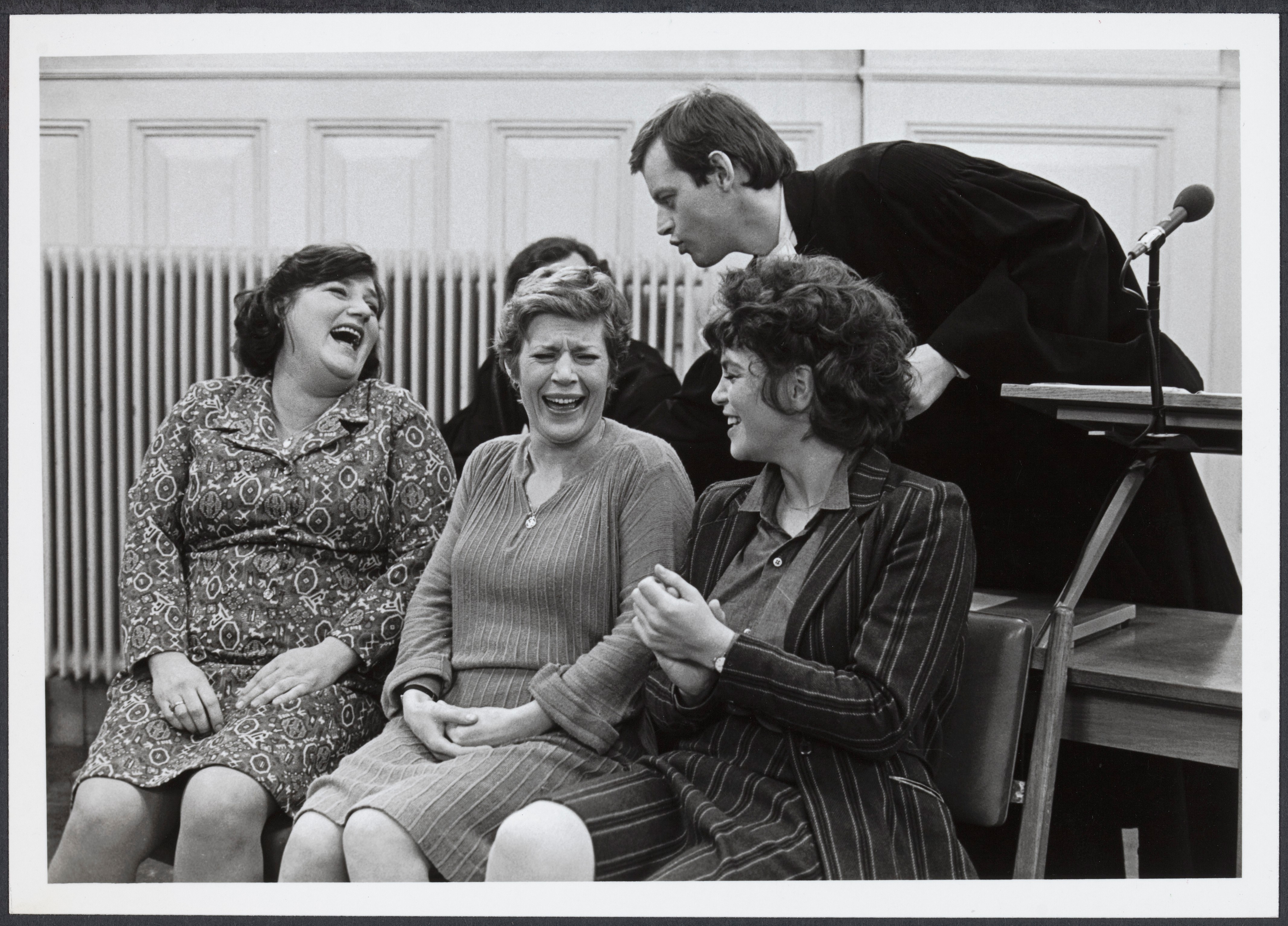 Everybody loves a courtroom drama scene. From John Cleese as a barrister in A Fish Called Wanda (1988) to the televised trial of O.J. Simpson, the public seems to have an insatiable appetite for criminal prosecutions, their drama and, at times, even the laughter that emerges from them. For some legal academics, studying cinema is important because it feeds the public imagination about the law.

The idea that a film can be analysed for its legal content or its jurisprudential value has been termed ‘cinematic jurisprudence’. This was first defined by Anthony Chase as ‘a way of looking at law through the lens of cinema that projects an alternative view of legality, one every bit as likely to undermine ruling ideas about fairness and formal legal equality as to reinforce them’.[i] Orit Kamir has argued that the medium of film allows for multi-layered narratives which can evoke complex and emotional responses to the legal issues on screen.[ii] As trials and hearings themselves have moved online, legal scholars have become increasingly interested in film. Far more people are likely to watch trials in movies and on television than will read the thousands of pages of transcripts and judgments produced by courts and tribunals. This is why, for lawyers, studying film matters.

Feminist films’ portrayal of the law can challenge its implicit masculinity, either by exposing the gendered ways in which supposedly neutral laws operate, or by showing how procedural rules silence women’s narratives. Films such as Hidden Figures (2016), Adam’s Rib (1949), and Legally Blonde (2001) highlight how intersectional feminist advocacy can be used successfully to challenge discriminatory or masculinist approaches to the law. Through the personal struggles of the women on screen, these films, while entertaining, also make very important points about the law, showing how it can operate as an obstacle to women’s equality in and even outside the courtroom.

A woman in the courtroom can highlight the law’s complicity with patriarchy, and invite audiences to laugh at traditional masculine approaches to proceedings and judgment. This is exactly what A Question of Silence (1982), Marleen Gorris’s feminist film classic and debut, does so well. The film invites audiences to judge not only the women who are the defendants in a murder trial, but also the entire legal and social system.

Can laughter be a tool to challenge the law?

A Question of Silence centres around the fictional case of three women who spontaneously kill a man they do not know. The women are also unknown to each other until they find themselves by chance one day in a clothes shop, where they brutally kill the owner of the shop while the other customers, all women, watch in silence. The film’s main character is Janine, a criminal psychiatrist appointed as an expert to determine the women’s sanity. Janine’s relationship with her lawyer husband, a relationship which initially seems fairly egalitarian, comes under strain during the film due to her realization that the women all had a common motive for the murder: patriarchy.

The viewer is made aware of patriarchy’s role through Janine’s interviews and conversations with the women. She asks one of them — Andrea, a secretary — if the three would have killed a woman. Of course not, Andrea retorts. In flashbacks portraying the women’s lives, we see Andrea’s voice silenced in the boardroom, her ideas appropriated by men. She is belittled, ignored, and undervalued. Strikingly, another of the accused — Christine, a housewife — remains silent throughout the film. We see Janine interview Christine’s husband, who complains that his wife has nothing to do, being at home all day. He is blind to her reproductive work in the household. As another of the women informs Janine, Christine has stopped speaking because no one listens to her.

The women’s silencing echoes feminist legal literature that analyses how the justice system suppresses women’s narratives and voices in the courtroom. Even Janine’s husband admits that the justice system is not impartial and that everything is decided beforehand — a further indictment of patriarchy in action, although he does not mean it that way (the comment occurs at a dinner party, in an act of conversational male bonding). This lack of impartiality is also evident in the climactic courtroom scene, where the key actors — lawyers, judges, and those in positions of authority — are all men.

When Janine is called to testify, she is questioned by the three judges (male) and prosecutor (male) and interrupted by defence counsel (male). The prosecutor cross-examining her is constantly sexist in his language, for instance in questioning her objectivity (’What you mean by “objectivity” is your [own] attitude,’ Janine responds). The film culminates with the three accused laughing at the prosecutor, and joined by the women in the public gallery who witnessed the killing and have seemingly attended the hearing out of solidarity. Even Janine laughs at the prosecutor’s assessment that the case would be absolutely no different had the three women killed a female shopkeeper, or even if three men had killed a female shopkeeper. The failure of this male representative of the state and the law to grasp the women’s motive become a laughing matter. The women laugh at the law’s gender blindness and stupidity, and their laughter is a feminist tool of solidarity against patriarchy’s constrictions and constructions.

Courtroom proceedings are commonly orientated to the shutting down of natural narrative and emotion.[iii] Scholars have written about how films portray and stereotype female lawyers as emotional, or as professionally successful but emotionally unfulfilled. In Cynthia Lucia’s analysis:

By their very presence, women in law throw into relief the condition of women in patriarchal culture, whether in terms of female gender performance or female agency, as both are inflected and regulated by the law and conventional narrative form.[iv]

Yet emotion generally, and laughter specifically, can be powerful means to contest the sterility, ritual, and order of the proceedings. They disrupt the decorum and the performance of the law where everyone is meant to play specific roles. In A Question of Silence, the women use laughter to challenge the gender blindness of the courtroom and the law. Judith Resnik and Carolyn Heilbrun have argued that ‘the silencing of women has not […] been complete: stories have and do emerge. Women break out of the roles given to them, as they make their way toward generating their own stories — sometimes even before they can be heard.’[v] In this film, we see the women break their silence and break out of their roles through laughter.

Keina Yoshida is a Research Officer in the Centre for Women, Peace, and Security. Keina is researching the links between the environment, nature, sustainable development goals, the gendered causes and impacts of violence against women, and structural inequalities in the context of international legal conceptions of peace and security. Keina is barrister at Doughty Street Chambers where she also forms part of the Doughty Street International team. She is a member of the editorial board of Feminist Legal Studies.

Caspar Addyman is a psychologist and director of the InfantLab at Goldsmiths, University of London. He has investigated how babies acquire language, concepts, and their sense of time. Since 2012 he has studied how laughter helps babies bond and learn.