New (Normal) Materialist Decay: a series of conversations on the new IAS theme of Growth

New (Normal) Materialist Decay will showcase a series of discussions under a new materialist approach to the built environment — The last session (day 5) has been indefinitely postponed. 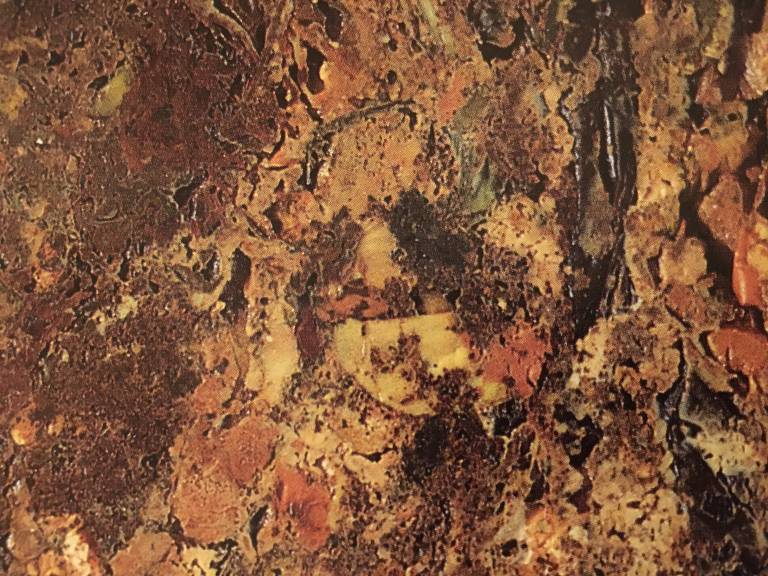 Decaying matter is an essential component of our built environment. From compost in our gardens, to lichen and fungi in our brick and stone walls and tile roofs, to bacteria on our skin, our environment grows thanks to and along with non-human decay. However, we neglect these non-human agents and, now more than ever, we fear them as they also include viruses and the surfaces where viruses inhabit. We wash our hands with antibacterial soaps, interact with the world through gloves, masks, scrubs, glasses and screens. We now sterilise our built environment more than ever, thus polluting it with toxic antibacterial matter. To ignore decaying matter and the waste of our new material mediations (as well as their destinies and trajectories) also means to neglect the human workforce that physically deals with decay and the organisms that support it.

New (Normal) Materialist Decay will showcase a series of conversations under a new materialist approach to the built environment. For this revised series, we want to question how the new normal challenges previous revolutionary approaches to decaying matter (compost, soil, bodies, food, weeds…) and question if it is still possible to shift thinking about them. Before COVID-19, one could have imagined a poetics of waste co-existing with the repurposing of waste so that it comes to signify as non-waste. But what can we do now?

This series of panel debates and conversations will involve academics, artists, gardeners, botanists, chemists and landscape architects. These conversations and their outcomes will be free and open to everyone. This series is partly funded by the Embassy of the Kingdom of the Netherlands and supported by UCL Urban Laboratory and the Institute of Advanced Studies at UCL as part of their collaboration on the research theme of Waste. This series is part of a bigger project conceived by Sabina Andron (UCL, Ravensbourne) and Albert Brenchat (UCL, BBK, AA)

Day 2. Wed 4 Nov, 5pm (BST). The Aesthetics and Care of the Soil in the Urban Environment

In the time of coronavirus, public lavatories closed for several weeks. These are, generally, small spaces where distancing others is difficult, and where bodily fluids and particles in suspension increase the risk of viral infection. Newspapers from The Guardian to The Telegraph would report during May and June 2020 that public lavatories were ‘a cause of anxiety, distress and frustration’, especially amongst the elder. Citizens would find relief in parks’ peripheral masses of bushes and trees.

In 1992, artist and architect Katerine Shonfield (along with Frank O’Sullivan) covered the glazed tiles of some run down public lavatories with goose feathers. This artwork, called Dirt is Matter Out of Place, aimed to create a porous surface that trapped germs and dirt in it, related sexual practices and criminal behaviour to dirt, and presented spatial forms associated with dirt.

But something was missing in Shonfield’s critique and that the coronavirus crisis has brought to light: the labour of those workers that take care of public spaces, usually Latinxs or of African descent who speak languages other than North European Languages. In the time of coronavirus, some workers including nurses, doctors and couriers acquired the new social category of ‘key workers’. However, cleaners are still fighting for full recognition in this category. The current pandemic has proven, as the media and unions have been denouncing, that some key workers endure degrading working conditions.

The panel will present union-engaged positions on the intersection of labour, race and dirt in response to key workers’ role in dealing with viral spaces and a response from an academic from the Arts and Humanities. with Hélène Frichot (Melbourne), Cecilia Vallejos (artist), Lotika Singha (Wolverhampton), Matthijs De Bruijne (artist) and Nicola Baldwin (IAS). Chaired by Albert Brenchat-Aguilar (Birkbeck/Architectural Association)

Look closely but don’t touch. While over-exposed to the fictional and fixed aesthetics of SARS-CoV-2, we are all suffering, in different degrees, of what is being called in the mass media as ‘skin hunger’: a desire for human touch that is being explained as a biological need. Haptic communication has been reported to affect infants’ wellbeing, adolescents’ behaviour, stress, and even immunity, pain and attention. Few months through the coronavirus pandemic have been enough to publish papers assessing the current situation of touch deprived peoples. This panel aims to think through the current touch deprivation in terms of appreciations and affections with the bacteria of the skin. Taking into account the agency of touching as a privilege in the present times (imposed on some and prohibited to others) we wonder: What can we build from current aesthetic-agentic relations with our skin bacteria? Or in other words, what can we take from looking closely at the bacteria of our skin in the current coronavirus pandemic from an artistic lens?

This panel presents the work of three artists approaching the aesthetics and ecology of bacteria in the skin and responses from two academics from the arts and humanities. With Marina Warner (BBK), Anne Anlin Cheng (Princeton), Tiffany Jaeyeon Shin (artist), Sonja Bäumel (artist) and Mellissa Fisher (artist). Chaired by Albert Brenchat-Aguilar (Birkbeck/Architectural Association)

Day 2: Wed 4 Nov, 5pm (UK Time) — The aesthetics and Care of the Soil in the Urban Environment

Please listen to a recording of this conversation below.

In the built environment, soil is not only polluted but also privated of water and neglected behind layers of soil subproducts. The urban environment avoids soil as it is dirty, a waste of walkable space, a patch where plants should spring up and do not, or an opportunity to speculate with the value of what can come on top of it. To soil is to stain, physically and morally.

This panel presents poetic engagements with soil that look beneath the surface: soil as an organism made of decaying and life-giving matter, and as a superorganism containing myriads of organisms. It also aims to politicise new materialist approaches of soil: who works with soil in construction, who lives in brownfields or get beneath the urban surface to live or maintain our infrastructures. It also presents responses from the practices of gardening and ecological sciences.

Please listen to a recording of this conversation below.

Dirt and waste have a clear political and spatial place: always excluded, outside the realms of the acceptable, conceivable or representable. As if it were a contagious disease, dealing with waste and being treated as waste seem quite closely connected. Positivist feminist positions have clearly emphasised a different take: decay is about togetherness, making kin, assuming the unavoidable extinction - individual or collective - that critters and us are part of. They ask us to become compostists instead of posthumanists, to make kin with the underworld. But does this interpretation of decay leave difference behind and is it adequate for the current circumstances?

This introductory panel to New (Normal) Materialist Decay aims to present two current works-in-progress discussing decay from intersectional theory, with a response from ecology. We are delighted to welcome Brigitte Baptiste, Mel Y. Chen and Kyla Wazana Tompkins for this discussion, whose works politicise new materialism from material micro-relations, linguistics and affect, amongst others. We suggest reading the works hyperlinked in their bios. The session will be chaired by Lo Marshall and Albert Brenchat-Aguilar.