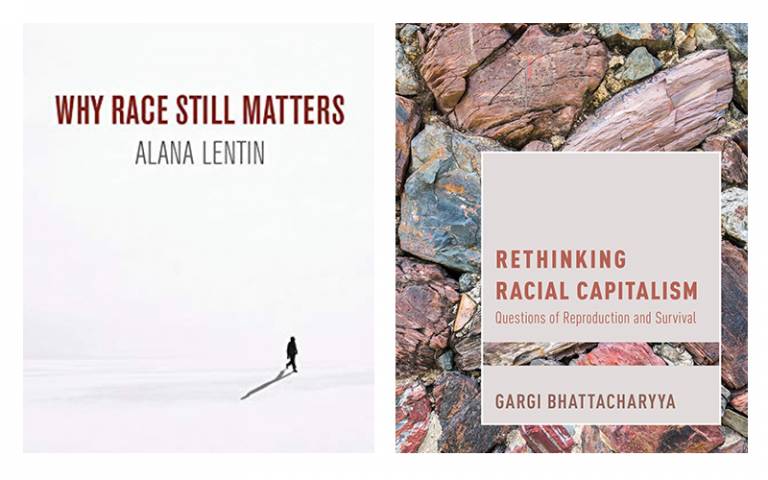 Join Alana Lentin and Gargi Bhattacharyya for an online conversation about the mechanics of race and racism at our current juncture.

This event is organised by UCL's Sarah Parker Remond Centre

Join Alana Lentin and Gargi Bhattacharyya for an online conversation about the mechanics of race and racism at our current juncture. They will reflect not only on the core arguments developed across their most recent books - Why Race Still Matters and Rethinking Racial Capitalism respectively - but also on what has been happening since.

Both scholars have long exemplified an innovative, critical, and public-facing approach to the study of race and racism, and both are widely read inside and outside the university. Both share a deep commitment to teaching, supporting students and activists, and building and nurturing anti-racist ideas, movements and organisations. In this conversation, they reflect on some of the key challenges and the critical openings as they continue this important work.

The Sarah Parker Remond Centre is delighted to host this conversation between Alana Lentin and Gargi Bhattacharyya, which will cover a range of themes: including the meanings of racial capitalism, colonialism’s afterlives, new articulations of nationalism, the apparent failure of multiculturalism, and debates about race and racism in public. Luke de Noronha, lecturer at the Centre, will chair the event.

Alana Lentin is an Associate Professor of Cultural and Social Analysis at Western Sydney University. She is a Jewish European woman who is a settler on Gadigal land (Sydney, Australia). She works on the critical theorization of race, racism and antiracism. Her latest book is Why Race Still Matters (Polity 2020) and she previously published The Crises of Multiculturalism: Racism in a neoliberal age with Gavan Titley (Zed, 2011). She co-edits the Rowman & Littlefield ‘Challenging Migration Studies’ books series, the ‘Decolonization and Social Worlds’ series at Bristol University Press and co-presents the Race in Society web series on YouTube with Dr Zuleyka Zevallos. She is an editorial board member of Ethnic and Racial Studies and Identities among other journals. Her academic and media articles as well as videos, podcasts, and teaching materials can be found at www.alanalentin.net

Gargi Bhattacharyya is Professor of Sociology at the University of East London where they co-direct the Centre for Migration, Refugees and Belonging. They have published widely in the fields of racism, sexuality, inequality, militarism, austerity and racial capitalism. Their books include: Dangerous Brown Men (Zed, 2008), Crisis, Austerity and Everyday Life (Palgrave Macmillan, 2015), Rethinking Racial Capitalism (Rowman and Littlefield, 2018) and the multi-authored Empire’s Endgame (Pluto, 2021).