VIRTUAL CSSA: Of Hooks and Handkerchiefs 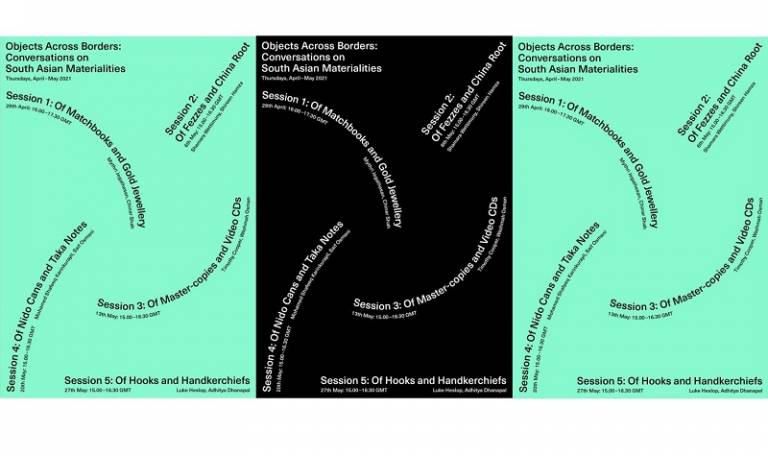 Part of the Objects Across Borders series, reflecting on the stories embedded in visual and material artefacts, we are pleased to present Luke Heslop and Adhitya Dhanapal

Centre for the Study of South Asia and the Indian Ocean World
v.buthpitiya@ucl.ac.uk

A cylindrical piece of wood is cut to measure almost perfectly the width of a man’s hand across the knuckle. When placed in a labourer’s hand with his fist clenched, his fingers will envelop it tightly, and satisfyingly, save for a length of steel protruding from the wood between the middle and index finger. This steel will travel straight for a few inches before curling into a hook forming a near perfect extension of the carriers’ body. With this hook a labourer can almost double the load he might ordinarily be able to carry. This simple tool of wood and steel is a material object ubiquitous across South Asian geographies of labour. Attached to the hands stevedores, emancipated slaves, and ‘coolies’ in ports and labour sites across the subcontinent, the longshoreman’s hook, has had an historical
hand in the movement of goods and the extraction of value from labour under capital. The hook has also played an informal role in the physical protection of workers. Though at one level a commonplace tool, it has been personalised by labourers. As a specific regional contribution to the workshop, this presentation explores the social life of the hook in a world of labour in Sri Lanka’s wholesale markets.

In this talk, I will look at the history of the “Real Madras Handkerchief”, a popular item of export to West Africa in the 19th century and later on, the United States in the 1950s to highlight how consumer preferences and increasing demand for vegetable dyes and the handmade, “artisanal” process of production continued to shape the market in a world saturated with mass produced, mill-made cloth.

Part of the Objects Across Borders series, bringing together scholars and creative practitioners working in and on South Asia to reflect on the stories embedded in visual and material artefacts. This series is organised by Vindhya Buthpitiya (UCL) and Mallika Leuzinger (Princeton) and hosted by the UCL Centre for the Study of South Asia and the Indian Ocean World, and The Fung Global Fellows Program and Program in South Asian Studies at Princeton University.

Please register to attend at https://ucl.zoom.us/meeting/register/tJEucumrqzkiHN1d8NtlRsFtrtLdocOBxb-G

Lecturer in Anthropology at Brunel

Luke Heslop trained in anthropology at the University of Edinburgh (Ph.D 2015) and was a Fellow at the London School of Economics prior to joining
Brunel as a Lecturer in Anthropology. He has worked for many years in Sri Lanka and the Maldives and his research is centred on current trends
in development and anthropology around markets, infrastructure, work and labour. He specialises in trade, mobility, and the social life of work in South
Asia.

Earlier, he graduated in Art History and got an M.Phil in History from Jawaharlal Nehru University, New Delhi. His research studies the political
economy of household-based handloom production in 20th century India at the intersection of Caste.