VIRTUAL EVENT: The Black People's Day of Action 40 years on 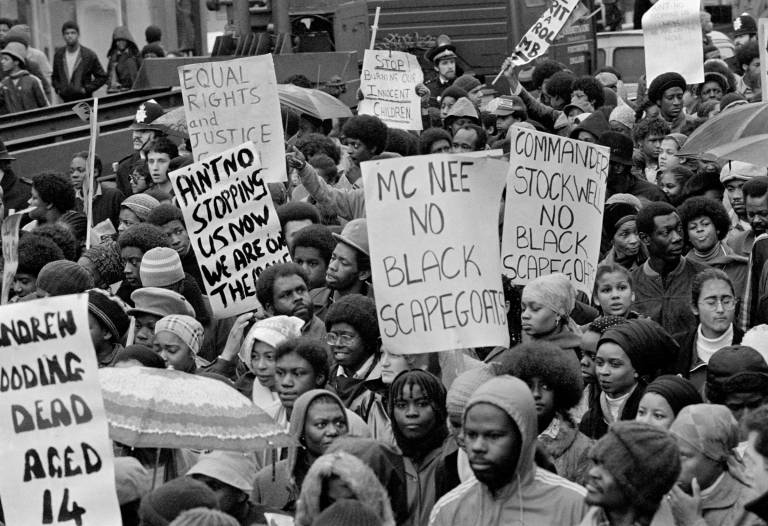 This event will be hosted as a Zoom meeting by UCL.

Please note that the session (as well as the chat function) may be recorded and retained as per UCL’s retention schedule.

The Black People’s Day of Action took place on March 2nd 1981. It saw thousands of people march through London in response to government and state responses to the New Cross Fire which had taken the lives of thirteen young people on January 18th 1981.

The march represented a community coming together politically to fight injustice, to protest against racist violence and to denounce the failure of the police to fully investigate the tragic, murderous incident. The day should be remembered because it marked a turning point, politically and culturally, for black people across the UK. It was followed by further demonstrations and led directly to the riots that erupted between April and July of that year.

Professor Paul Gilroy (UCL’s Sarah Parker Remond Centre) will chair a discussion to remember and reflect upon this momentous day, as well as to acknowledge its enduring significance and relevance in today’s political and cultural climate.

She is the author of Imperial Intimacies, A Tale of Two Islands (Verso, 2019) selected as one of the “Books of the Year for 2019,” by the Times Literary Supplement, and winner of the British Academy’s Nayef Al-Rodhan Prize for Global Cultural Understanding, 2020. Author of Cultures in Babylon: Black Britain and African America (1999); Race Men (1998); Reconstructing Womanhood: The Emergence of the Afro-American Woman Novelist (1987); Hazel Carby is also a co-author of The Empire Strikes Back: Race and Racism in 70s Britain (1982).

In 2019 Hazel Carby was awarded the honorary degree of Doctor of Letters from Wesleyan University and the Stuart Hall Outstanding Mentor Award from the Caribbean Philosophical Association.  In 2016 she received the Jay B. Hubbell Medal for lifetime achievement in American Literature, awarded by the Modern Language Association.

Stafford Scott
Stafford Scott is a qualified Youth & Community Development worker and has worked in this field, in various guises, for the past 30 years. Stafford’s career began with estate-based work in the 1980s on the Broadwater Farm estate in Tottenham, North London, where he was the London Borough of Haringey’s Senior Youth & Community officer. In more recent times Stafford has worked as the Director of the Bernie Grant Trust’s Community Leadership Programme where he designed and delivered Community Leadership Training programmes to members of black communities in Manchester, Liverpool and in several different locations across London. Stafford then went on to work as a consultant at the Department of Health where he wrote a guide, ‘A Dialogue of Equals’ for the NHS to support them to improve their track record in engaging with communities who were perceived to be ‘hard to reach’ by NHS planners.

Stafford has also been a member of the Department for Communities & Local Government’s Community Forum where he advised department leads on the impact of Government policies on marginalised communities. Stafford is probably best known for the campaigning work that he has been doing since his days on BWF where he was instrumental in setting up the Broadwater Farm Defence Campaign which campaigned, successfully, for the release of the Tottenham Three after their wrongful arrest and conviction for the murder of PC Keith Blakelock. Stafford was Head of Advocacy at The Monitoring Group was for many years and is currently Director of Tottenham Rights CIC. Stafford occasionally writes articles for the Guardian Newspaper on matters relating to the black community and policing.

Dr Lisa Amanda Palmer
Lisa Amanda Palmer is an Associate Professor and Deputy Director of the Stephen Lawrence Research Centre at De Montfort University, Leicester. She was the former Course Director for the Black Studies undergraduate programme and Senior Lecturer in Sociology at Birmingham City University. Lisa is a qualified librarian and previously worked for Birmingham Libraries and Archive Services for many years. She has a keen interest in working with local archive collections, specifically, the Vanley Burke Archive held at the Library of Birmingham.

Her research focuses on Black feminism, Black cultural politics and the intersection of race, racism, gender and sexuality. Her writing covers a broad spectrum of fields including the gendered politics of lovers’ rock music, the production of local community archives and knowledge production, and the misogynoir faced by Black women in British public life. She is the co-author of the book Blackness in Britain (2016) and is currently writing her book on Black women in the UK’s lover’s rock reggae scene.

Dr Adam Elliott-Cooper
Adam Elliott-Cooper is a Researcher in Social Sciences at Greenwich University, and a Visiting Research Fellow at UCL’s Sarah Parker Remond Centre. His current research focuses on resistance to racist state violence in 21st century Britain, with an interest in how this resistance is shaped by histories of imperialism and anti-imperialism. Adam sits on the board of The Monitoring Group, an anti-racist organisation challenging state racisms and racial violence.

He has published on anti-racism and policing in Ethnic and Racial Studies, Antipode and City, as well as on housing and gentrification in Progress in Human Geography and Sociological Review. He is the author of Black Resistance to British Policing (MUP, 2021) and co-author of Empire's Endgame: Racism and the British State (Pluto Press, 2021).

All welcome.  Please do not hesitate to contact us if you need assistance on the day, and follow this FAQ link for more information and to read our virtual events code of conduct. All of our events are free, but you can support the IAS here.