International women’s day with COSS ONLINE: A Celebration of Women In Space 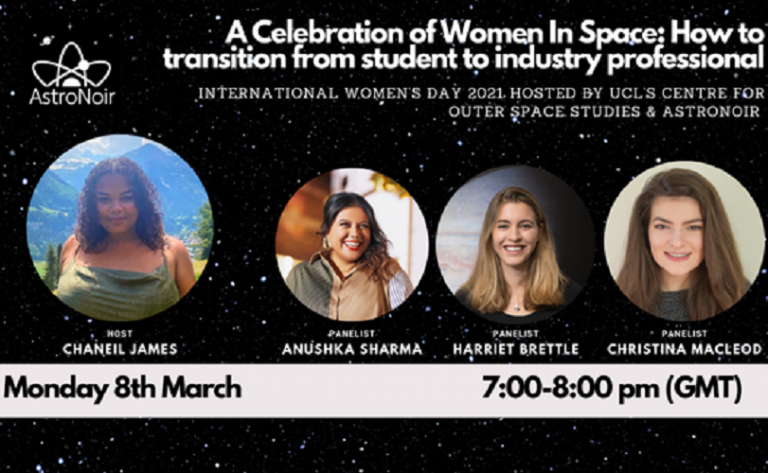 A Celebration of Women In Space: How to Transition from Student to Industry Professional. Hosted by Chaneil James

This panel introduces students and early professionals to the experiences of women working within the space industry. The event features four women panelists from diverse backgrounds within the industry. This event will be hosted by Chaneil James, student of Astrophysics, Particle Physics and Cosmology at the University of Barcelona and founder of AstroNoir.org, as well as a Scientific Journalist for Physics World Magazine and a subject matter expert for NASA Space apps. Chaneil will be in conversation with; Anushka Sharma - founder of Naaut and co-founder London Space Network; Harriet Brettle - the head of business analysis at Astroscale and co-founder of the London Space Network alongside Anushka; and Christina MacLeod - mechanical engineering student at the University of Edinburgh and founder and Chair of the Edinburgh Women in Space Conference. The panel will discuss how to network within the space sector and experiences of being women in the academic and professional space industries.

This event was organised by the Centre for Outer Space Studies, part of the UCL Institute of Advanced Studies.

Completed her BSc in Earth Sciences (geophysics based) at UCL, where her final year Geosciences Project was titled “The Evolution of Mercury’s Core”. During her time at UCL she worked for NASA FDL/FDL Europe and was a student intern at CERN. Chaneil is now studying an MS Astrophysics, Particle Physics and Cosmology at the University of Barcelona. Chaneil is currently the Head of Sponsorship at Edinburgh Women in Space. She is also a Freelance Scientific Journalist for Physics World, Diversity Coordinator for UKSEDS, Subject Matter Expert for the NASA SpaceApps Hackathon events, and the Founder of AstroNoir.

Anushka Sharma is Founder of Naaut and Co-founder London Space Network. Nush is a connector, technology generalist, and has focused on AI for space applications. She builds communities and partnerships across the space and technology ecosystems and champions diversity and inclusion. She’s worked with NASA Frontier Development Lab, has been a mentor and judge for the Space Apps Challenge and brought Space to the London Tech Week agenda officially in 2020.

Harriet Brettle is Head of Business Analysis at Astroscale, co-chair of the Space Generation Advisory Council, and co-founder of the London Space Network. With a background in finance and space science, she is passionate about interdisciplinary collaboration and the future of the new space economy

Christina MacLeod is a mechanical engineering student at the University of Edinburgh, founder & chair of the Edinburgh Women in Space Conference, founder of Miss Astronautica, and member of various women in STEM committees. She is interested in all aspects of the space sector and passionate about getting everyone involved in the world of space.