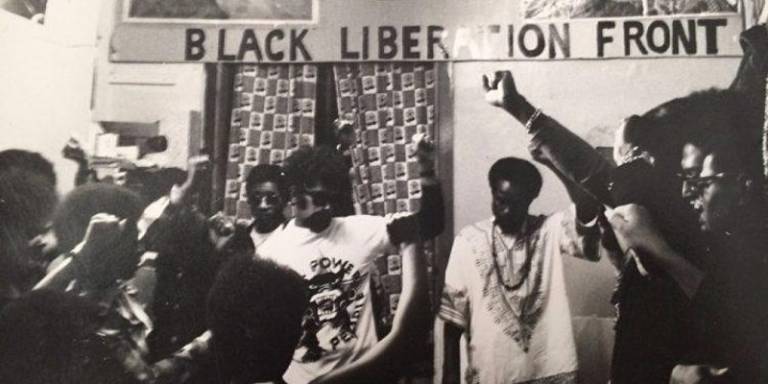 The BLF, formed in 1971, was one of the most active British Black Power groups. In 2017 the YHP made the one and only documentary about them

The Black Liberation Front (BLF) was formed in 1971 and to date was one of the most active and impactful Black Power organisations in Britain. In 2017 the Young Historians Project interviewed 9 former members of the BLF to capture their stories and created a 38 minute documentary and a multi-panel exhibition for people to learn and be inspired by this history.

Watch the BLF documentary below online at the time of your choice, then join us on the 15th June for a 90 minute Q&A with the young people who made the film. They will discuss their motivations, what they learned, current projects and the impact of 2020 on the appetite for black history.

About the Black Liberation Front

The BLF published the Grassroots Newspaper aimed at the people of Britain’s Black community. It offered an alternative news source to mainstream media. The pages of Grassroots were filled with artworks from BLF members, articles and poems relating to Black history, a Women’s Column, Family Page, information on cases of police brutality in Britain as well as news on anti-colonial struggles taking place in Africa and the Caribbean at the time.

At that time it was extremely difficult to source Black literature, and books on Black history and politics were near impossible to find in high-street bookshops so the BLF established three Black bookshops across North and North West London, including the Grassroots storefront on Ladbroke Grove which became a hub for information, events and community support. The Headstart bookshop on West Green Road in north London housed a supplementary school for young people. Volunteers taught maths, English and Black history on the weekends to counter the poor quality of education and discriminatory attitudes towards young Black people and children in British schools.

As a Pan-Africanist and socialist organisation the BLF was dedicated to the total liberation of Africa from colonialism in all its forms. In 1974 three BLF members were sent as delegates to the Sixth Pan-African Congress in Tanzania. The BLF also played a major role in organising the annual Africa Liberation Day celebrations in the UK during the 1970s and early 1980s. Using organisational links with liberation movements on the continent, the BLF raised money and sent medical supplies to support liberation struggles in Angola, Mozambique, South Africa and elsewhere.

Alongside education, employment and police brutality, housing was one issue which affected Black people in Britain during the late 20th century. The BLF established the Ujima Housing Association to provide local Black communities, especially vulnerable young people and mothers, with safe and affordable housing. When Ujima eventually merged with London and Quadrant in 2008, it had assets to the value of £2 billion.

Other important aspects of the BLF’s work included its Prisoner Welfare Schemes and involvement in Britain’s Black women’s movement. Although the organisation folded in 1993 and experienced many challenges, including attacks from police, the National Front, state surveillance and internal political differences, the organisation left an indelible mark on the landscape of Black British activism and community self-help initiatives. It is during times such as the ongoing worldwide calls for an end to police brutality and racist structures, that we can lean on the legacies of groups such as the Black Liberation Front for guidance and a blueprint to create tangible change.

“We stand for the right of Black people to determine our own destiny. This of course involves great personal sacrifices, but it is a responsibility we must take up. We are our own liberators.”
– BLF’s Working Platform

The Young Historians Project, founded in 2015, is a non-profit organisation formed of young people of African and Caribbean descent in Britain. Their mission is to produce dynamic projects showcasing underrepresented aspects of Black British History, and to encourage other young people to engage in these histories.

You can watch the documentary produced by the Young Historians Project in 2017 (link below) at any time. Then you can join the Q&A with the YHP on the 15th June 2021.