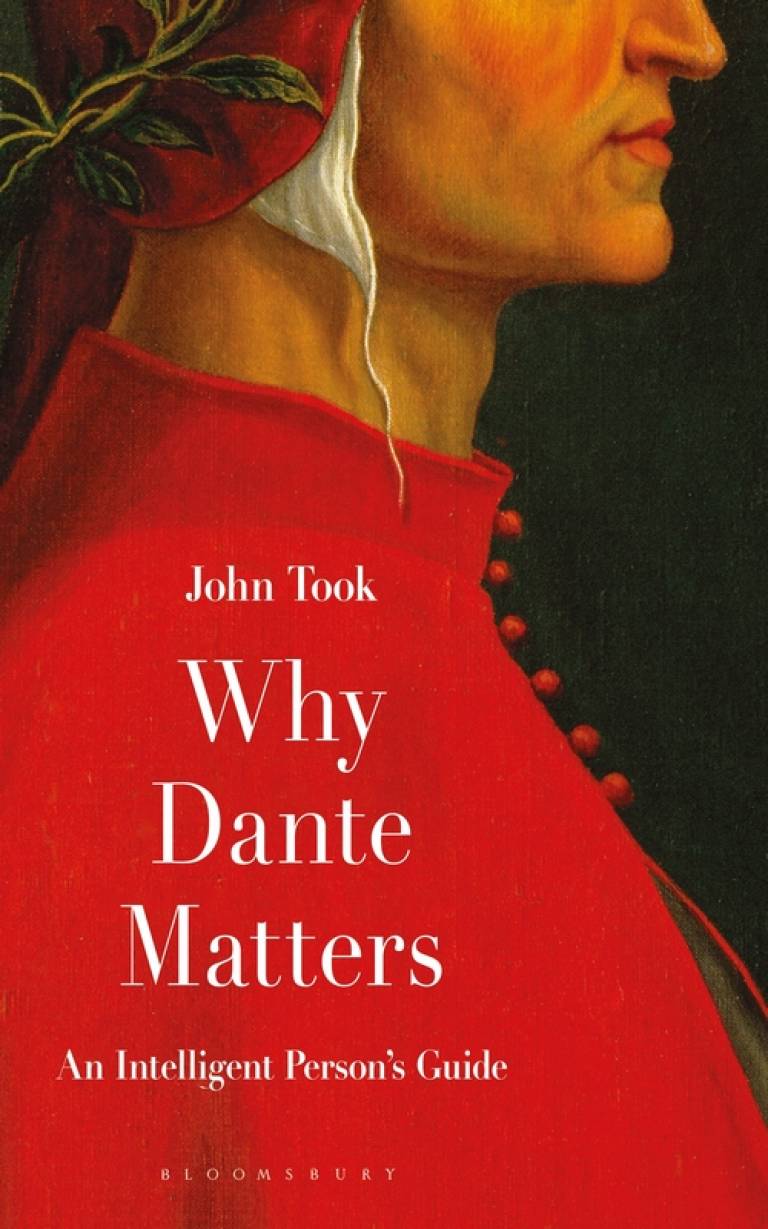 We are delighted to welcome John Took (SELCS, UCL) to the IAS to present 'Why Dante Matters: An Intelligent Person's Guide', his latest book, in conversation with Jane Gilbert (SELCS, UCL). Chaired by Catherine Keen (SELCS, UCL).

Bloomsbury and the Institute of Advanced Studies (UCL)
Amy.Greaves@bloomsbury.com
instituteofadvancedstudies@ucl.ac.uk

The year 2021 marks the 700th anniversary of the death of Dante Alighieri, a poet who, as T. S. Eliot put it, 'divides the world with Shakespeare, there being no third'. His, like ours, was a world of moral uncertainty and political violence, all of which made not only for the agony of exile but for an ever deeper meditation on the nature of human happiness.

Committed as he was to the welfare not only of his contemporaries but of those 'who will deem this time ancient', Dante's is in this sense a discourse overarching the centuries, a discourse confirming him in his status, not merely as a cultural icon, but as a fellow traveller.

This book is published by Bloomsbury.

John Took is Professor Emeritus of Dante Studies at University College London. Prominent among his books and articles on Dante — many of them turning on the poet’s significance as a leading representative of what Paul Tillich calls the ‘existentialist point of view’ in philosophy and theology — is his recently published intellectual biography of Dante entitled simply Dante (Princeton University Press, 2020).

Jane Gilbert studied at Cambridge and (briefly) at the Courtauld Institute, and has lectured at UCL since 1997. She works on French and English medieval literature, and is interested especially in conversations between medieval literature and modern critical theory. Her recent publications include Medieval French Literary Culture Abroad (OUP, 2020); co-authored with William Burgwinkle and Simon Gaunt, this book emerged from the AHRC-funded project recorded at www.medievalfrancophone.ac.uk, which investigated how Old French literary texts and manuscripts were produced and circulated outside France, with a view to projecting a non-national history of French literature. Her current project is on Form in Translation: how literary form translates between French, English and Latin in medieval texts and manuscripts, how forms are laid out in manuscripts, and the affective, literary and philosophical consequences.

All welcome. An event link will be announced on this webpage.  Please do not hesitate to contact us if you need assistance on the day, and follow this FAQ link for more information and to read our virtual events code of conduct. All of our events are free, but you can support the IAS here.