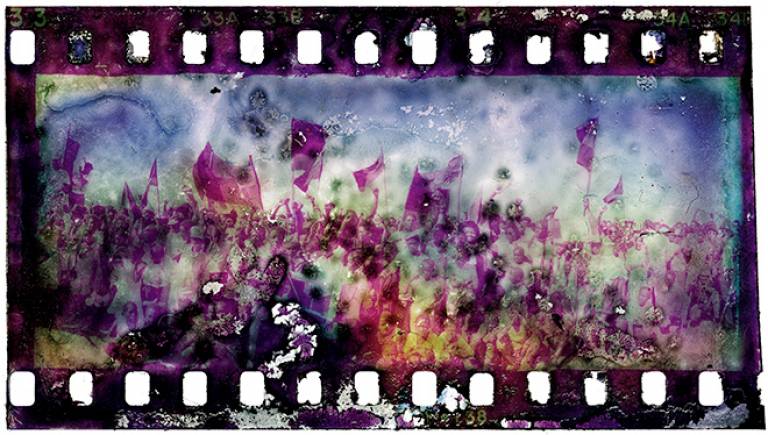 Thirty years ago, photographer Gideon Mendel left a box of negatives and transparencies in storage in a friend’s garage in Johannesburg. At some point the box was rained upon and the top layers damaged. The affected photographs were from Mendel’s documentation of the final years of apartheid when he had witnessed the nationwide township uprising and scenes of mobilization, conflict and tragedy. This act of happenstance led to Mendel revisiting and re-engaging with his archives, and the gradual creation of this book Freedom or Death.

Freedom or Death is divided into three sections, each with a different intervention to the original images from Mendel’s time as a ‘struggle’ photographer in South Africa. The first section ‘Damage,’ as described above—the accidental, colorful and painterly transformation of the negatives and transparencies by mold and moisture.

If these images were initially meant to bolster memory, they now speak of the fragility and malleability of memory itself, reminders that a material trace of the past can be altered or even obliterated, just as the images of memory in the human mind can be entirely changed—whether purposefully or not—when subjected to the currents of time. Denis Hirson

The second section, ‘The Stone, the Gun and the Plate,’ is a collaboration with Marcelo Brodsky, an Argentinian artist known for his human rights activism. Brodsky writes and draws on photographs as a means of enhancing the historical narratives of images. For this collaboration, they conceived four triptychs, each focused on an object that repeatedly appeared in Mendel’s black and white photographs from 1985 and 1986. The stone, teargas, the wooden gun and the sjambok (a flexible rubber whip) were selected to reflect the conflict and repression of these particular years. Brodsky’s revisioning of these photographs with a childlike colour palette, coupled with the mutation into comic book stylization, acts as an unsettling counterpoint to the violent subject matter.

The final section of the book ‘Merged’ is derived from vintage working press prints from the same period. Several of the photographs were made for newswire transmission with caption information pasted onto the front of the prints, some have a variety of crop marks on their reverse sides, and others have Mendel’s hand-written captions or agency copyright labels, along with detailed information about the photographs from his time with Magnum Photos and Network agency. The front and reverse of the prints has been precisely digitally merged to combine image, word and marking, reflecting the original functionality of the photographs. This third, and deliberate alternation has exposed the process, craft and sense of urgency hidden on the reverse of the original photographs.

Grappling with and reworking images from the past renders them relevant and meaningful in the ‘now’ and allows them to re-enter the present discourse through new positionings and framings. Mendel’s work in this book poignantly ‘harps’ on the past by acknowledging continuities of the apartheid phenomenon in the present. His sensitive work into the archival material brings about possibilities of new perspectives and interpretations. Farieda Nazier

The book is published by GOSTBooks. Please find the book in this link.

Gideon Mendel’s intimate style of image-making and long-term commitment to socially engaged projects has earned international recognition. Born in Johannesburg in 1959, Mendel began his career as a news and ‘struggle’ photographer documenting the final years of apartheid. This experience marked him deeply, and much of his subsequent work has been engaged with the key political issues facing his generation. In 1991 he moved to London, and continued to respond to global concerns, especially HIV/ AIDS. Since 2007, using stills and video, Mendel has been working on Drowning World, an art and advocacy project about flooding that is his personal response to our climate crisis. He has twice been shortlisted for the Prix Pictet (2015 and 2019) and has received the Jackson Pollock Prize for Creativity, the Greenpeace Photo Award, the Eugene Smith Award for Humanistic Photography and the Amnesty International Media Award. His work has been widely published, his images have been used in numerous climate protests and his photographic prints, installations and video pieces are increasingly seen in a variety of gallery and museum contexts. Gideon Mendel is represented in Germany and South Africa by ARTCO Gallery.

Image: A rally welcoming the SWAPO Party of Namibia’s leader Sam Nujoma on his return to Namibia after thirty years in exile.—Windhoek, September 1989