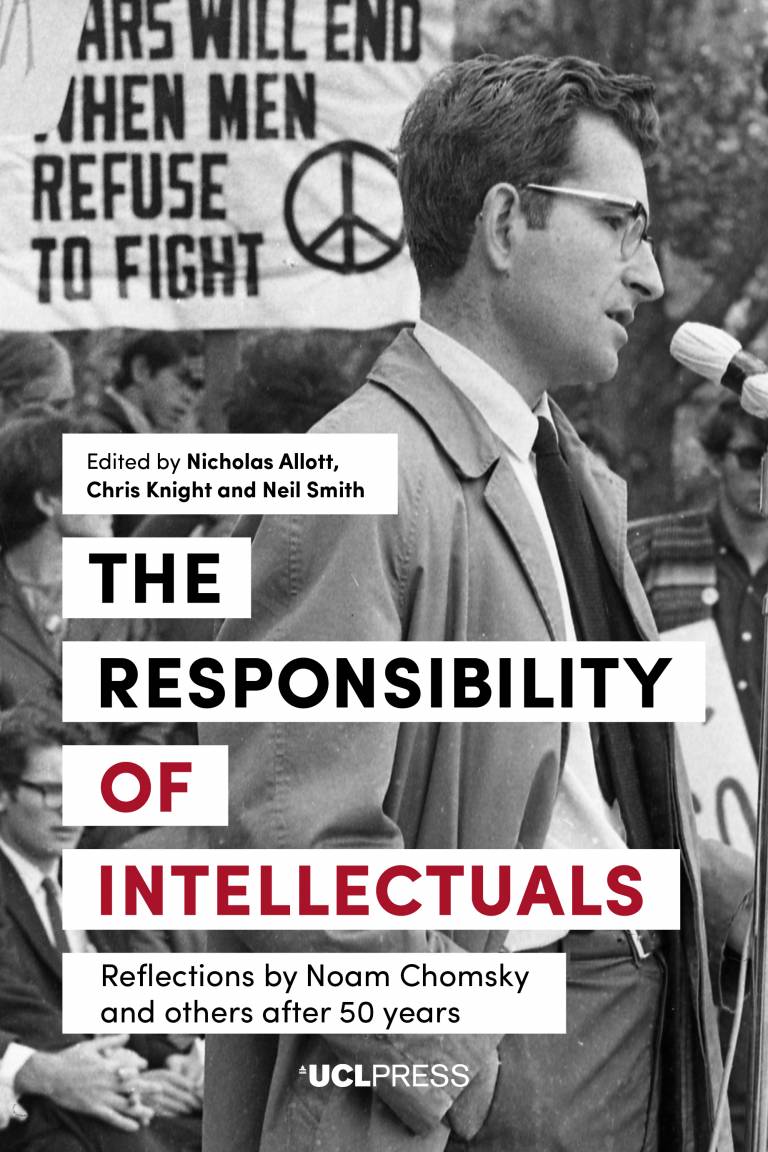 We are delighted to welcome Chris Knight (Professor of Anthropology, research fellow, UCL) for the launch of his new book, co-edited with Nicholas Allott and Neil Smith called ‘The Responsibility of Intellectuals: Reflections by Noam Chomsky and others after 50 years'. We will introduce the book and hold a panel discussion involving three of the authors, followed by a few questions and then refreshments.

With the publication of ‘The Responsibility of Intellectuals’ half a century ago, Noam Chomsky burst onto the US political scene as a leading critic of the war in Vietnam. Privilege, he argues, brings with it the responsibility to tell the truth and expose lies, but our intellectual culture only pays lip-service to this ideal. The essay has been described as ‘the single most influential piece of anti-war literature’ of the Vietnam war period.

Since then, Chomsky has continued to equip a growing international audience with the facts and arguments needed to understand – and change – our world. According to The New York Times, Chomsky ‘may be the most widely read American voice on foreign policy on the planet today.’

This book revisits ‘The Responsibility of Intellectuals’ half a century on. It includes six new essays written to celebrate Chomsky’s famous intervention and explore its relevance in today’s world. Nicholas Allott, Chris Knight, Milan Rai and Neil Smith have studied and written about Chomsky’s thought for many years, while Craig Murray and Jackie Walker describe the personal price they have paid for speaking out. The book finishes with Chomsky’s recollections of the background to the original publication of his essay, followed by extensive commentary from him on its 50th anniversary.

‘The Responsibility of Intellectuals: Reflections by Noam Chomsky and others after 50 years' published by UCL Press, is available as a free downloadable PDF as well as in print for sale. Details at www.uclpress.co.uk

Chris Knight is a research fellow at UCL, a longstanding political activist and the author of Blood Relations: Menstruation and the Origins of Culture (Yale University Press, 1995) and Decoding Chomsky: Science and Revolutionary Politics (Yale University Press, 2016). He is co-founder of EVOLANG, the interdisciplinary conference series on the evolution of language.

Milan Rai is a longstanding anti-war activist and writer. He is the author of several books including Chomsky’s Politics (Verso, 1995 and 7/7: The London Bombings, Islam and the Iraq War (Pluto, 2006). He has been co-editor of Peace News since 2007.

Jackie Walker is a black, Jewish activist and author, a founding member of Jewish Voice for Labour, a defender of Palestinian rights, a longstanding campaigner against racism and the former Vice-Chair of Momentum, the left-wing movement in the British Labour Party. Author of the acclaimed family memoir Pilgrim State (Sceptre, 2008), she recently staged a one-woman show, The Lynching, designed to combat racism – including antisemitism – in certain sectors of British political life.

All welcome. Please note that there may be photography and/or audio recording at some events. Please bring your tickets for this event.