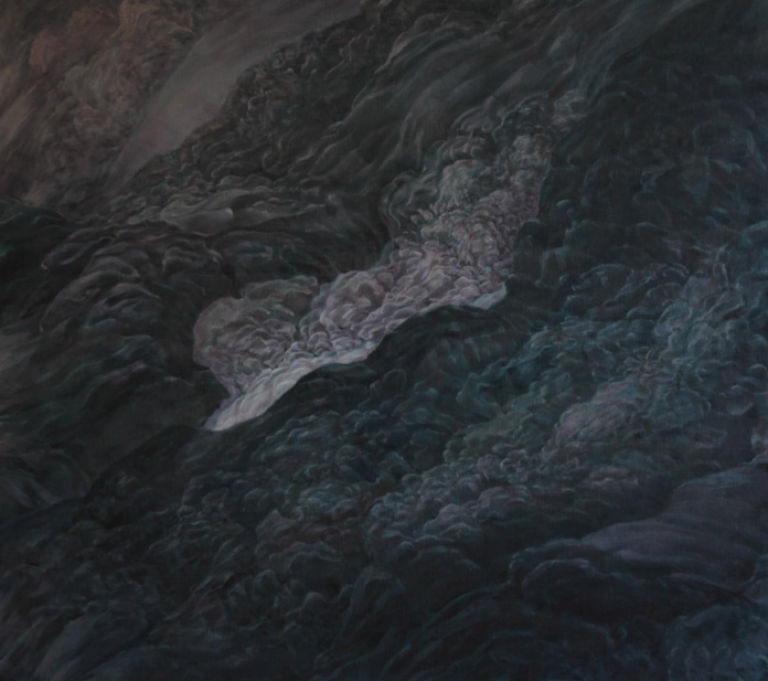 A conversation with artists Lola Frost and Edmund Clark

What is the relation of vulnerability to precarity, fragility and risk in the making of art? How might art make visible vulnerable states and subjects in ways that challenge conventional aesthetic, political and social categories, subverting existing hierarchies of power while staging quiet, yet potent, modes of dissent?

Merleau-Ponty's phrase 'The Flesh of the world', as a metaphor for an aesthetically attuned and reversible process in which "doubling, difference and desire" are "crocheted into all that is there", serves as a template for exploring the risks, precarities and vulnerabilities of Frost's painted landscapes of an improper uncanny sublime (see image above). The artist's presentation will explore the subversive interventions of her practice within the tradition of the sublime in painting. Such subversion extends to the performance of 'doubling, difference and desire' as a riposte to a social and perceptual imaginary preoccupied with subject-object and mind-body dichotomies and hierarchies. This is an imaginary which continues to sustain masculine privilege, the repression and regulation of the 'carnal', cognitive control, visual mastery and instrumental and purposive reason. This norm-contesting practice invites us to consider the risky and transient vulnerabilities of unguarded and libidinal psychic life, opening up the productive potential of 'the precarious encounter'.

My Shadow's Reflection is part of a new body of work by the artist-in-residence of Europe's only entirely therapeutic prison environment, HM Prison Grendon. Clark's photographs comprise architectural images of the prison, pinhole images of the occupants, and close-ups of flora and fauna growing in situ, picked and pressed by the artist. Opened in 1962, the prison's inmates agree to accept responsibility for their offences, offering full-time commitment to intensive group therapy while exercising a degree of control over the day-to-day running of their lives via democratic decision-making. Through research and evaluation, evidence shows that Grendon reduces levels of violence and disruption, while lowering reoffending levels after release. In Place of Hate, the exhibition of Clark's work as the prison's artist-in-residence, showed at Ikon, Birmingham until 11 March 2018. The exhibition combines photography, video and installation to explore ideas of visibility, representation, trauma and self-image, addressing how prisoners and the criminal justice system are perceived and discussed by the public, politicians and media in Britain today.

Lola Frost's artistic career spans nearly four decades. Work from her several feminist and war art exhibitions between 1983 and 1996 was taken up by major public collections in South Africa. Through a set of exhibitions since 2013 in the UK, she has developed a body of work that unsettles the tradition of sublime landscape painting and opens up a psychoanalytical and phenomenological template shaped by desire and subversion. Frost's academic career includes lecturing in various institutions on art history and art theory in South Africa and the UK.  Since her PhD at Goldsmiths College in 2007 she has published and given conference papers on aesthetics, politics, and ethics in art and international relations. In the context of two exhibitions and several collaborations, her Leverhulme artist's residency,  in War Studies at King's College London in 2014/2015 explored the productive potential of aesthetic risk.  She is currently a Visiting Research Fellow in War Studies, King's College London researching the topic of art and war.

Edmund Clark is an award-winning artist who links history, politics and representation. His research-based work combines a range of references and forms including bookmaking, installations, photography, video, documents, text and found images and material. Recurring themes include developing strategies for reconfiguring how subjects are seen and engaging with state censorship to explore unseen experiences, spaces and processes of control and incarceration in the 'Global War on Terror' and elsewhere. Clark has published six books and exhibited widely, including major solo exhibitions at the International Center of Photography Museum, New York, the Imperial War Museum, London, and Zephyr Raum für Fotografie, Reiss-Engelhorn-Museen, Mannheim. His work has been acquired for national and international collections including the ICP Museum and the George Eastman House Museum in America and the National Portrait Gallery, the Imperial War Museum and the National Media Museum in Great Britain.

Anna Marazuela Kim is an art historian, critic and cultural theorist whose research engages the deep structures of images and our complex relation to them, from Plato to the present digital age, drawing together ethics and aesthetics, phenomenology, urban studies, anthropology, religion and technology. Since 2011, she has been a member of Institutes of Advanced Study and international, cross-disciplinary research groups advancing studies of iconoclasm and iconic presence; images and religious conflict; and the role of the arts in civic thriving. Her primary research focuses on histories and theories of iconoclasm. A second area of research concerns art, conflict, terrorism and the new image wars, the subject of a book in progress. Dr. Kim is also an advisor to King's Centre for Strategic Communications in War Studies and Research Fellow of the Thriving Cities Project, Institute of Advanced Studies in Culture (University of Virginia).

First Image: Lola Frost, The Flesh of the World