Dr Terence McSweeney is a Senior Lecturer at Solent University, Southampton where he teaches Film and Television Studies. He has held research posts at the University of Oxford, Queen Mary University of London and is widely recognised as one of the leading writers on contemporary American cinema. Terence is the author of The War on Terror and American Film: ‘9/11 Frames per Second’ (Edinburgh University Press, 2014) and Avengers Assemble! Critical Perspectives on the Marvel Cinematic Universe (Wallflower Press, 2018), he is the editor of American Cinema in the Shadow of 9/11 (Edinburgh University Press, 2016), co-editor of Millennial Cinema: Memory in Global Film (Wallflower Press, 2012) and co-editor of the upcoming edited collection Through the Black Mirror: Deconstructing the Side Effects of the Digital Age (Palgrave Macmillan, forthcoming 2019) with Dr Stuart Joy, which features contributions from renowned scholars such as Henry Jenkins, Sean Redmond, Steffen Hantke, M. Keith Booker and many others.

In the academic year 2018-19 Terence gave the keynote address at the conference “Paranoia in the Americas: American Anxieties in a Transnational Context” at University College Cork in November and spoke at the British Film Institute with his colleague Dr Claire Hines as part of their “New Writings” events in December.

During his time at the IAS Terence will be working on multiple projects, but the one taking up the most of his time will be his monograph Blowback: The Representation of the ‘9/11 Wars’ in Global Film and Television, the first book to explore how the defining conflicts of the new millennium have been portrayed on the frames of global screens. Until now scholarly contributions to this topic have explored the depiction of these events primarily in American film and television, but in this book Terence interrogates twenty different case studies drawn from fourteen different countries, which reveals how profoundly film and television texts have been able to not only reflect how the wars in Afghanistan and Iraq have been understood by the countries that produced them at the time, but also shaped how those conflicts will be remembered for the generations that follow.

Update: In 2020, a documentary based on Terence's 'Blowback' project, 'Blowback: The 9/11 Wars in Global Film' was shortlisted for the AHRC Research in Film Awards.  Read about it and watch the documentary here.

Another of his projects developed at the IAS came to fruition with the publication by Wallflower/Columbia University Preess of his monograph, The Contemporary Superhero Film: Projections of power and identity.  Read more about it here. 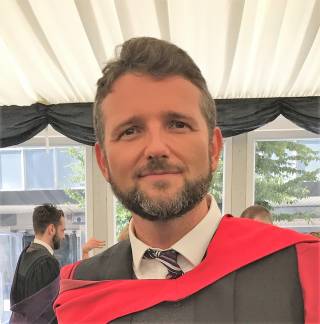