Juliette Milbach defended her PhD Etre artiste en Union soviétique. Le parcours d’Arkadiï Plastov (1893-1972). Réalisme, socialisme, nationalité [Being an artist in the Soviet Union. The path of Arkadiï Plastov (1893-1972). Realism, socialism, nationality] in 2014 at the National Institute for Art History (INHA, Paris).  She is a postodoctoral research associate at the School for Advanced Studies in the Social Sciences (EHESS, Paris), co-leads the monthly seminar 'Cultures visuelles: histoire croisée du regard soviétique'  (INHA, Paris) and participates in the research axis 'Creation, diffusion and reception of cultural goods in the imperial, Soviet and post-Soviet space' of CERCEC - Russian, Caucasian and Central European Studies (EHESS).

Her research areas are Soviet and Russian painting, 20th century realism, cultural exchanges between East and West, and art theory and modernism in the 20th century.

Title: 'Duality in History of Art: The gap between practice and theory in the Soviet artistic world after 1956'

Following the new historiography on the Thaw, Dr Milbach's research endeavours to overcome strict oppositions, such as art official/non-official, East/West, realism/abstraction. In this project, she will question the gap situated between theories of art and artistic practices. In particular, she will place an emphasis on journals, magazines and books about art and the use of images in, for example, exhibitions and reproductions of foreign art to complement stereotypical texts. She argues that the Soviet viewer integrated into their knowledge a complex combination of artistic practices of doublespeak in published sources, with visuals that offered opposing information. This forms a part of a larger research project, which started in her first-postdoctoral year (2015) when she studied the artistic interactions between the USSR and the USA during the 1920s. Since then, she has continued to consider artistic interactions to be a salient matter in approaches of Soviet culture and has extended her work both geographically (to cultures other than the US, such as France and Italy) and chronologically (she is now considering the entire Soviet period). However, interactions, transfers and translations of one culture to another are no longer situated at the centre of her research; instead, they are utilised as a tool to understand the Soviet art theory. Indeed, her main project, the piece of research she would like to conduct at the IAS, is to focus on the history of Soviet art discourse, not only through theoretical text and critical articles, but also predominantly on how images and their reproductions have helped the Soviet viewer (both the specialist and the amateur) to perceive art discourse. 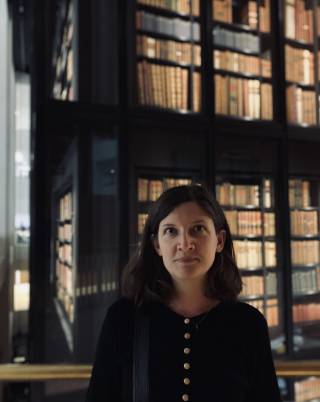