Dr Hélène Maloigne gained her PhD at the Department of History at UCL in 2020 with a thesis on the history of archaeology in the Middle East in the early 20th century. She has a BA in archaeology and ancient languages and an MA in archaeology and art history from the University of Bern in Switzerland. In 2012, she completed an MA in Museum Studies at the Institute of Archaeology at UCL.

As an Associate Lecturer (Teaching) at the Department of History at UCL, Hélène works on the core modules Writing History and Making History. She also acts as Writing and Learning Mentor to undergraduate students.

Hélène’s research centres on the history and practice of archaeology in the 19th and 20th centuries, with a focus on the interconnection between the creation of archaeology as a discipline, imperialism, gender performativity, friendship, and popular culture. She is interested in contextualizing the historical dependence of archaeology on power structures, and how the discipline can acknowledge and understand the past and move forward to a more inclusive and diverse future.

Her current project Performing Archaeology explores the development of archaeology as a discipline and a practice and its popular appeal in the late 19th century via the concept of gender performativity. The transformation of archaeology from a private enterprise into a pillar of state-funded ‘national’ heritage during the late 19th and early 20th centuries depended on the communication and publicizing skills of archaeologists, antiquarians and explorers. Reliant on private funding and support, early archaeologists supplied an ever-growing reading public with a steady diet of sensational discoveries via the periodical (especially illustrated) press. At the same time, they became increasingly aware of the need to professionalize their practices and defend the borders of their newly emerging sciences. It is the oscillating figure of exciting, ‘exotic’ and ‘masculine’ adventurer and ‘objective’ scientist that has shaped the image of the archaeologist in popular culture to this day. Hélène’s project challenges this linear narrative by tracing the reconfiguration of the amateur gentlemanly archaeologists of the 19th century into the professional scientists of the mid-20th century through the images they created of themselves in the illustrated press. Focusing on the Eastern Mediterranean, the project explores the interplay of archaeology with the growing imperial and colonial involvement of Britain, France and Germany in the Ottoman Empire, from the mid-nineteenth century through to the disintegration of the colonial project in the mid-twentieth century.

Hélène is the finds registrar of the Tell Atchana Excavations Project. 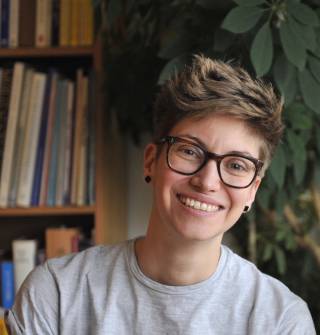