Franziska Neumann is the Joint Junior Research Fellow at the Institute of Advanced Studies and the German Historical Institute London for 2019-20.

Franziska's research project during her Fellowship at the IAS and GHIL is entitled ‘Matter out of Place’? Metropolitan ‘Waste Regimes’ (17th-19th century).  What is waste, and more precisely, what was waste in early modern urban environments? This simple question is notoriously difficult to answer. On the one hand, waste is an anthropological factum: when people live together, there is inevitably a certain amount of rejected matter involved. Waste is ubiquitous and has a measurable impact on human wellbeing and on ecosystems. Yet, on the other hand, waste is ‘matter out of place’ (Mary Douglas). It is not defined by any kind of intrinsic quality. Rather, waste is a product of political, economic and social norms and normative practices. Shaped by emotions from annoyance to disgust, defining social and political boundaries, waste is a social construction that links economic practices to concepts of purity, hygiene and social order. It is a ‘total social phenomenon’ (Marcel Mauss) that touches every aspect of social life. Through the lens of waste, Franziska wants to explore the relationship between matter, value and waste in early modern urban environments. Her project focuses on discourse and practices in unison, and it aims to question traditional narratives by exploring continuities and ruptures between the 17th and the 19th centuries. The project combines micro-historical and comparative approaches with a systematic interest in new cultural environmental history and uses waste as a prism to understand urban environments. Inspired by Zsusza Gille’s study of 20th century Hungarian ‘waste regimes’, it focuses on the production, representation and politics of waste within early modern cities – starting with London.

Franziska Neumann studied history, art history and philosophy and received her PhD degree in Early Modern and Modern History from the Technische Universität in Dresden with a thesis on the formalisation of the Saxon mining administration in the 16th century. Since 2017, she has worked as a research assistant and lecturer at the University of Rostock.

Franziska's research so far has focused on the dynamics between economic and environmental questions. Her PhD thesis explored the intersection between early modern capitalism and Saxon mining administrations during the late 15th and the 16th century. It combined archival research with a theoretical approach that aimed to introduce the organisational sociology of Niklas Luhmann into the history of mining. In her new research project, she examines the dynamics of pre-modern waste regimes. During her time in London, she will focus on a case study about London from the mid-seventeenth to the mid-nineteenth century. At a later stage, the London waste regime will be integrated into a comparative study that incorporates cities from the Holy Roman Empire (Hamburg, Berlin). 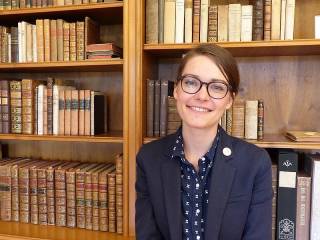