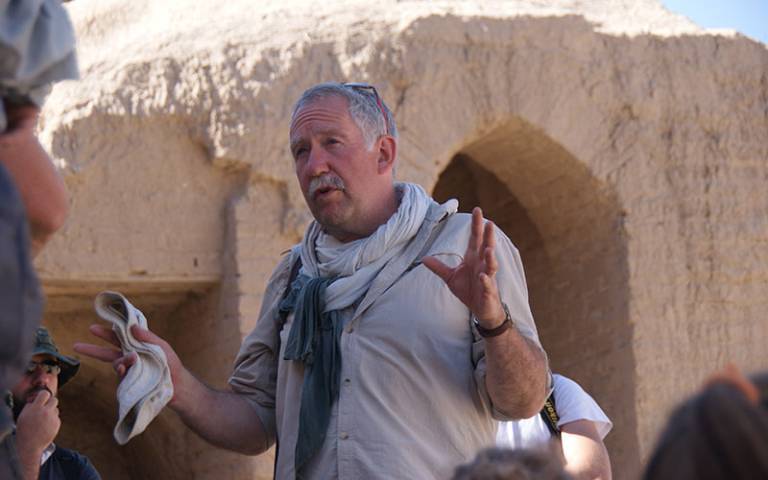 Professor Tim Williams from the UCL Institute of Archaeology has spent nearly two decades investigating the World Heritage site of Ancient Merv in Turkmenistan, one of the most important cities on the famous Silk Roads across Central Asia. His extensive fieldwork, aerial surveys, photographic, and laser scan data led to new understanding about the city’s urban development and how water systems shaped the area according to spiritual and practical needs.

Building upon this work, from 2014, a UCL team led by Professor Williams undertook The Silk Roads thematic study for UNESCO. Taking a new holistic approach to Silk Roads archaeology, this work examined how societies were connected through trade and travel, and how the area fluctuated over time with its dynamic political history.

The team mapped interactions over an area of 18 million square kilometres, drawing together data on over 10,000 different sites. This revealed 75,000 kilometres of ‘corridors of movement’, rather than narrowly defined routes, and identified new complexity, including shifting pathways of control and exploitation – not just from east to west but from north to south too, between the Steppe regions and South Asia.

This expertise led to Professor Williams’ invitation to lead the £2.8 million, 21-partner, multinational Central Asian Archaeological Landscape (CAAL) project to gather and synthesise data to inform heritage decision-making and research. The team is digitizing archives and records, bringing together information from regional research centres with satellite imagery and field survey into a multilingual catalogue.

Together, Professor Williams’ work has transformed the capacity of local heritage and archaeological institutions to face the challenge of the sustainable use of heritage in the 21st century. His work in Ancient Merv, for example, promoted the development of new conservation skills in the region including shared research and educational opportunities, leading to improved heritage management.

His concept of ‘corridors of movement’ has revolutionised the Silk Roads World Heritage nomination strategy. Owing to Professor Williams’ work, UNESCO now allows nominations focusing on specific regions or responses, alongside more traditional single-site approaches, paving the way for nominations across international boundaries. In all, 26 countries have adopted the strategy and in 2014 the first successful transnational nomination was the Routes Network of Chang’an-Tian Shan Corridor which encompasses 33 sites across China, Kazakhstan and Kyrgyzstan.

World Heritage Listing unlocks access to international funding and attracts tourism and media attention and the new nomination strategy has changed the focus of government and heritage agencies in Central Asia and China to adopt a more holistic approach to archaeological preservation. In turn, this has improved the designation of sites and landscapes, promoted capacity-building and increased investment in heritage management.

The CAAL project is also helping heritage agencies plan for contemporary challenges such as urban development, climate crisis and population change, providing the evidence for policy development and strategic planning of how to preserve landscapes and sites. Over 131,000 documents describing 9,229 monuments in Central Asia have been digitized and catalogued by CAAL to help preserve local historical and cultural heritage. Several countries in the region are now using CAAL to form the basis of digital national inventories.

More than 100 heritage management professionals have been trained by the CAAL team building capacity for heritage management across the whole region and equipping the people of Central Asia to face the challenges facing their world-famous heritage in the 21st century.

Professor Tim Williams’ research has transformed the management of archaeological heritage along the Silk Roads and deepened public understanding of these world-famous sites. His work inspired a new policy framework for World Heritage nominations, and has improved conservation, management, interpretation, and heritage tourism in the region.