Professor Carl Sayer and his team are restoring the UK’s lost and neglected farmland ponds and bringing biodiversity back into farmland through the multi-partner Norfolk Ponds Project (NPP). 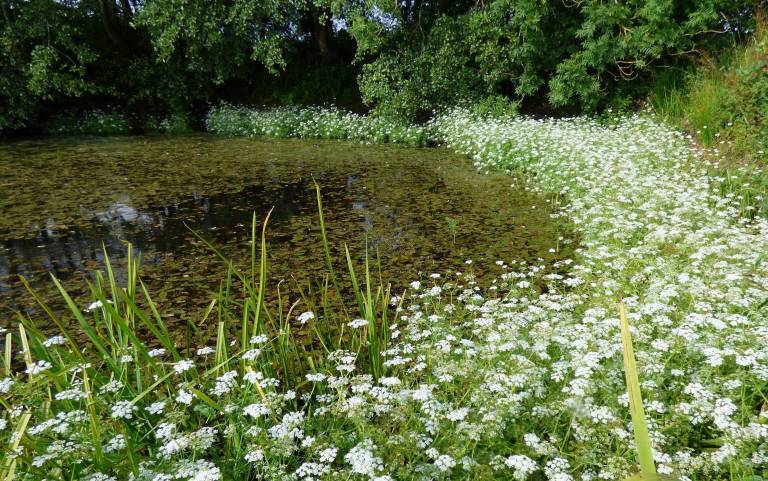 The UK’s ponds are a rich source of biodiversity, providing natural environments for many rare and declining species, including plants, insects, birds and bats. However, pond numbers and pond quality have been in decline during the last 50 years.

Since the 1950s, pressure on food production has led to many UK ponds being deliberately in-filled to reclaim farming land. This has created so-called ‘ghost ponds’, sometimes visible on the surface of fields as damp patches and crop marks.

At the same time, many remaining ponds have become overgrown, or ‘terrestrialised’, due to a decline in traditional pond management involving the removal of trees and sediment from ponds. These dark, shaded ponds offer scant habitat for wildlife.

The team has also re-excavated several of Norfolk’s ghost ponds, finding that an abundance of plant life has blossomed within less than a year of restoration. The secret to this rapid restoration appears to be buried pond muds, which preserve wetland plant seeds that lived in ponds in the past and which remain viable even after a century of burial under cropped fields.

Working with a range of partners, Professor Sayer established the Norfolk Ponds Project (NPP) with the aim of restoring ponds, conserving wildlife, and educating about pond management.

Since 2014, more than 200 terrestrialised ponds have been restored through the NPP, reintroducing diverse aquatic life to ponds, including the rare and beautiful Grass-poly, a plant which had not been recorded in Norfolk for a century.

An audience of over two million has been introduced to NPP through media appearances; and the team’s workshops, talks and open days, which have in turn engaged 3,700 farmers, policymakers, and conservationists, motivating action and teaching new skills.

For example, a 2019 two-day course on pond restoration run for farmers by the UCL team inspired attendees to restore 43 Norfolk ponds at their own cost.

The team’s work has also inspired similar events and projects in Suffolk and Gloucestershire, and the National Trust now include pond restoration in its £13 million Riverlands conservation programme which has committed to 50 pond restorations in Norfolk by 2023.

Three of the group’s research papers have been cited in Natural England’s ‘Narrative for conserving freshwater and wetland habitats in England’ which outlines the organisation’s conservation plans. This has led to farmland pond restoration (rather than just creation of new ponds) being included in policy to protect Great Crested Newts in England.

The team’s research on the impact of ponds on pollinators and farmland birds has led to the edges of ponds being included in DEFRA’s Wild Pollinator and Farm Wildlife Package for landowners.

Professor Carl Sayer and his team are restoring the UK’s lost and neglected farmland ponds and bringing biodiversity back into farmland. Through the multi-partner Norfolk Pond Project (NPP) Sayer’s research has brought hundreds of ponds back to life, changed farmland management and made pond restoration a critical part of the nation’s nature conservation strategy.