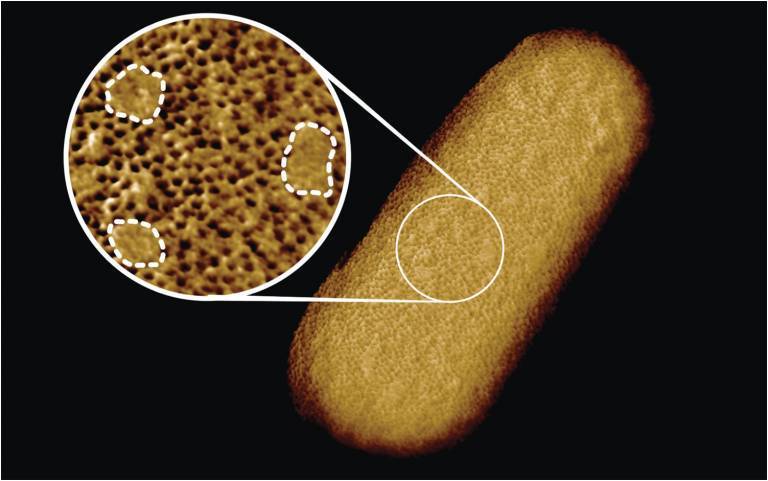 Atomic force microscopy (AFM) is used to characterise surfaces at the nanoscale for a wide range of applications, from determining the shape and size of new drug candidates to testing the quality of semiconductors. It works in a similar way to a visually impaired person reading Braille, by scanning a probe (like a finger) over a surface, with precision at the scale of less than a nanometre.

Professor Bart Hoogenboom’s lab at UCL's Department of Physics and Astronomy has pioneered advances in AFM and developed methods and protocols to improve and benchmark its performance.

His team developed their own new AFM instrument that sensed the force on an AFM probe by detecting its deflection off the surface via a technique called optical interferometry. Using this technique, Hoogenboom’s team were the first to show that AFM can resolve the two strands of the DNA double helix – a pioneering achievement which contributed to him being awarded the 2017 Medal for Scanning Probe Microscopy of the Royal Microscopical Society.

Advancing the field with collaboration

The UCL team has collaborated with instrument manufacturer Bruker since 2012, using their data and findings to help improve Bruker’s commercial AFM microscopes and probes. In particular, the team developed new protocols and probes to achieve similarly high resolution on Bruker’s own instruments in a reliable and reproducible way.

Since then, this ability to resolve the DNA double helix has been generally adopted as a quality benchmark across the Bio AFM market, enabling Bruker to distinguish their instruments from less advanced systems on the market, thereby strengthening Bruker’s market position.

Reliable products for the future of molecular biology

Over the years, Bruker has become the market leader in the AFM field, through a combination of take-overs, development of high-quality instruments, and the high quality of its AFM probes, with some of these probes specifically developed based on input from the UCL team. The Bruker Nano arm of the business, which collaborates with UCL, is now worth $632.7 million, or 30% of the company’s revenue.

The company’s newer AFM probe products, PeakForce-HIRS-F-A/B, are currently some of the most reliable probes for high-resolution imaging on single biomolecules and are a direct result of the UCL team’s (and particularly Dr Alice Pyne’s) benchmarking and prototype evaluation work on DNA. Because of their high specification, the probes are sold for double the price compared to Bruker’s more standard models.

Thomas Mueller, director of product management and applications development of Bruker Nano Surfaces, said: “As a result of the improved sample preparation protocol and the quality DNA double helix images Dr Pyne had captured, we were then able to use these images, benchmark PeakForce Tapping Mode against peer methods and provide proof of performance in some of our tender responses.”

In 2017, the Bruker Nano Group reported a $58.4 million increase in revenue on the previous year, corresponding with the launch of the PeakForce-HIRS-F-A/B product range, confirming UCL’s contribution to boosting the company’s bottom line.

Professor Bart Hoogenboom has pioneered advances in atomic force microscopy (AFM) that enable the two strands of the Watson-Crick double helix to be resolved on single DNA molecules. To make this type of molecular imaging quality more widely available, his team has collaborated with the Bruker, a world-leading company in scientific instrumentation. This collaboration has led to improvement of Bruker’s commercial AFM microscopes and probes, and has resulted in the high-resolution DNA imaging now being a benchmark of quality across the industry.