UCL evidence has altered the strategic spending of millions of dollars by governments and NGOs, and has helped some 3,000,000 ultra-poor households around the world. 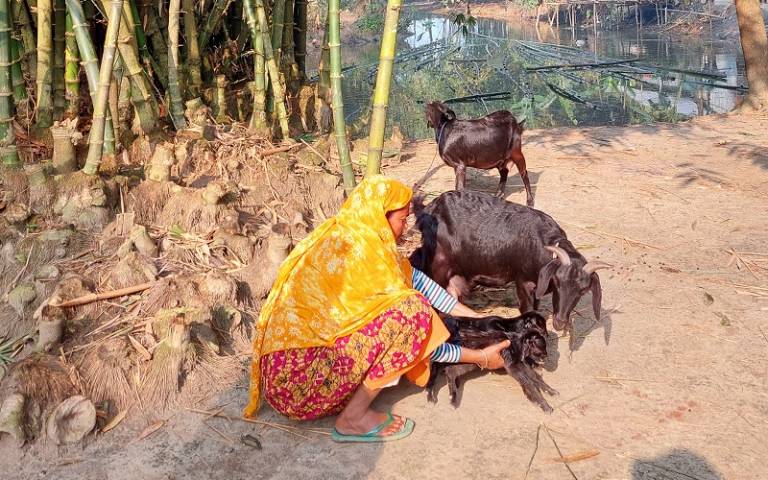 Around 800 million people worldwide survive on less than the extreme poverty line of $1.90 a day. These are the so-called ‘ultra-poor’; mostly rural women who have limited skills, work largely in insecure wage labour, and who own few or no assets. Despite many efforts, most attempts to alleviate poverty have failed to help this hard-to-reach group.

A new approach to an international crisis

The Bangladesh Rural Advancement Committee (BRAC) programme ‘Targeting the Ultra-Poor’ (TUP) provided a new type of anti-poverty approach. Since 2002 it has provided ultra-poor people with a one-off transfer of livestock (worth $140) along with skills training (worth another $140) over two years to help ‘graduate’ them out of poverty. UCL’s Professor Imran Rasul evaluated the effectiveness of TUP along with colleagues from London School of Economics (LSE) and the University of Bocconi, showing very promising results.

Their evaluation found that four years after their livestock transfer, ultra-poor women had increased their total working hours and earnings, accumulating more livestock, land and business assets. What’s more, these effects accelerated over time, and did not come at the expense of non-participating households in the same communities. This provided the first robust evidence for the long-term efficacy of the graduation-style TUP programme, which in turn had a profound effect on global anti-poverty efforts.

BRAC now dedicates $20-30 million of its budget to its ultra-poor graduate programme which supported 1.9 million ultra-poor households between 2002 and 2017, 95% of whom were lifted out of poverty and managed to maintain these improved conditions. The trial findings also prompted BRAC to pilot ‘graduation’ programmes in Pakistan, Haiti, Ethiopia, Ghana, Honduras, India, Peru, Sudan and Uganda, boosting participants’ knowledge, skills, health and nutrition and their financial behaviours.

Children’s charity World Vision International has made the graduation approach its core model for the period to 2030, informing a budget of $300 million to shape operations across 65 countries. The BOMA project in Kenya, international development organisation ‘Trickle Up’ and the UN High Commissioner for Refugees (UNHCR) have all adopted the approach too. In Costa Rica, where the programme was implemented by the UNHCR, unemployment rates fell from 36% to 4%, self-employment rates more than doubled, and 79% of households’ monthly income was at least at the minimum wage after graduation.

A ‘State of the Sector’ report by the World Bank’s Partnership for Economic Inclusion showed that in 2018, there were 99 ‘graduation’ programmes in 43 countries, serving 3.1 million households, and 2020 BRAC figures showed that this had increased to 114 programmes in 45 countries.

Of the 800 million people globally living on less than $2 USD per day, almost half are classified as ‘ultra-poor’. This group has proved particularly difficult to reach, but UCL evidence shows that providing households with $280 worth of livestock and training can be enough to lift people out of poverty for good. This has altered the strategic spending of millions of dollars by governments and NGOs and has helped some 3,000,000 ultra-poor households around the world