UCL’s research and ongoing engagement with the Met Office have helped transform the organisation to be a global influencer in space weather and inspired hundreds of people to study physics. 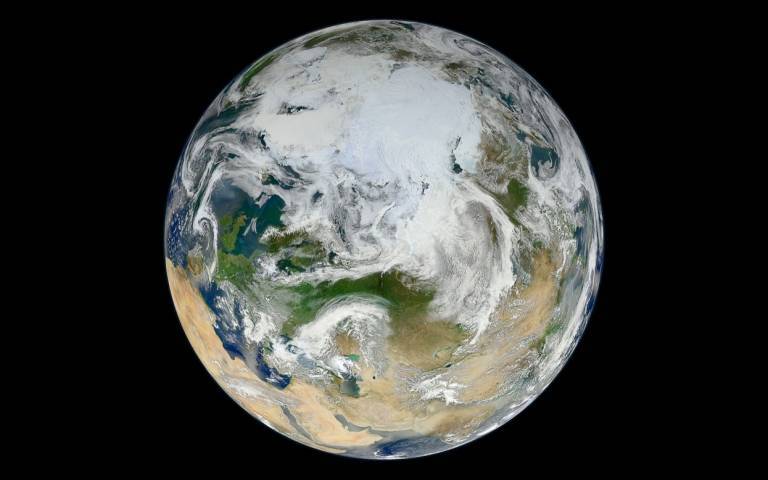 Professor Lucie Green (UCL Department of Space and Climate Physics) conducted research into the evolution of the Sun’s atmospheric magnetic field and the origin of vast magnetised plasma eruptions known as coronal mass ejections. The work built on previous foundational studies by Professor Green that showed the originator of coronal mass ejections to be a specific twisted magnetic field configuration.

The latest findings, including those from work led by PhD students Alexander James and Jennifer O’Kane (who were supervised by Professor Green), reveal the characteristics of these twisted ‘flux ropes’ and the mechanisms by which they form. Taken together, the research shows that flux ropes are much more common in the solar atmosphere than previously thought.

When flux ropes are ejected from the Sun as a coronal mass ejection (CME), they can propagate to the Earth and disturb the geomagnetic field, leading to a chain reaction of processes that ultimately results in disruption to modern technologies such as power distribution, communications, and navigation services.

This area of research that looks at how the Sun affects the Earth is known as space weather. Part of what influences the geo-effectiveness of the flux rope is down to its orientation and the details of its configuration when interacting with the Earth’s magnetic field.

An analysis of whether observations of flux ropes on the Sun just before they erupt can be used to forecast their orientation at Earth, and therefore their likely space weather impact, was led by a PhD student in Finland (Erika Palmerio) with support and supervision from Professor Green.

Professor Green effectively shared her research on CMEs with more than 90,000 people (students aged 5-18 and science teachers) at more than 45 face-to-face school events in the UK from 2014 to 2020.

Her public engagement activities had a significant influence on female students, by increasing their understanding of solar physics and changing their perception about becoming a physicist. This style of engagement event led by Professor Green inspired females to pursue studies and a career in physics and contributed to an increase of 11% (from 21% in 2012/2013 to 32% in 2019/2020) female student intake to physics at UCL during the current impact period.

The underpinning research has been translated into training for space weather forecasters and stakeholders from across the space weather sector.

For example, Professor Green communicated her solar physics research at the Flarecast workshop in 2017 (30 attendees), the European Space Weather Week in 2014 (350 attendees) and training schools for forecasters at the Met Office Space Weather Operations Centre (MOSWOC) in 2017 and 2018 (eight attendees).

The longitudinal engagement with MOSWOC contributed to changes in the organisational culture. Currently, MOSWOC relies heavily on the use of images of the Sun and their interpretation to forecast space weather-related to events such as CMEs. Hence, the underpinning research that was communicated at the training events increased forecasters’ knowledge and the competencies required for their role.

UCL physics researchers who participated in the discovery of the Higgs boson and the ATLAS experiment have contributed to media features, written articles, blog posts, public and school talks, panel discussions, and published books on the topic. These efforts have reached huge audiences worldwide and have continued to spark interest in physics and improve public understanding of the nature and purpose of scientific research.