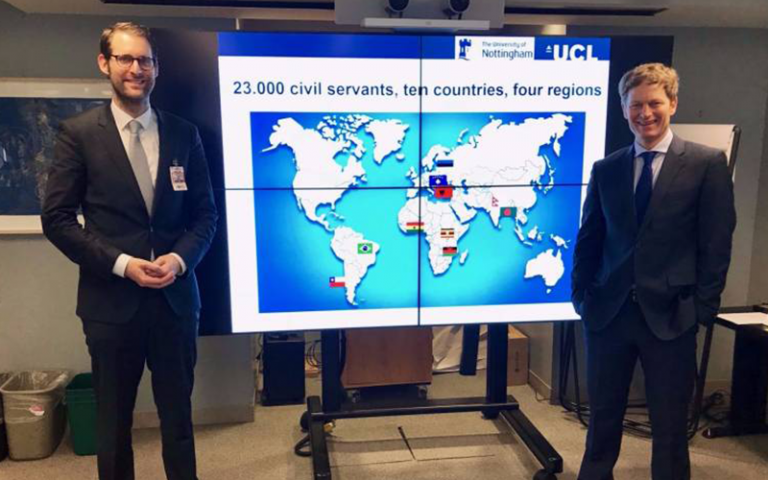 Employee surveys or ‘people analytics’ provide important insights into public servant employee motivation and satisfaction; factors which are crucial in ensuring governments run effectively. While such surveys have long been used in OECD countries, their absence in developing nations has limited our knowledge of management practices and their effects in these countries.

Along with the University of Nottingham’s Professor Jan-Hinrik Meyer-Sahling, Professor Schuster developed a survey specifically adapted to understand the management challenges faced by governments in developing countries. The pair then rolled out their survey to 23,000 respondents across 10 countries in Latin America, Africa, Asia and Eastern Europe.

The surveys provided a crucial evidence base for understanding employee needs and improving management practices. Key findings include, for instance, the positive effects of meritocratic recruitment practices in civil services, and the inadequacy of many ethics trainings to enhance employee integrity.

The results of the survey were shared with civil service directors, government ministers, heads of public agencies and other high-level officials in the UK and internationally through reports, blogs and presentations. This led to governments – such as the Colombian one – updating their own internal staff survey based on the findings, and international organizations – such as the OECD – changing their advice to governments on how to conduct civil service surveys and altered their own survey design.

Professor Schuster’s findings on the positive benefits of meritocratic recruitment for public servants has led to improvements in merit practices. In Chile the number of vacancies advertised publicly on the government’s online public sector job portal has increased by over 300 per cent since a 2017 executive decree requiring merit-based recruitment. As on-going nepotism practices were still identified, the government later developed draft legislation to strengthen merit protections in law. In Kosovo too, a new law requiring merit-based competition was introduced to reduce unfair recruitment practices.

Professor Schuster’s research also uncovered the inadequacy of ethics training for public servants, with several government departments in Chile revising their ethics training and the Nepalese government requesting support for improvement in this area. These latter demands contributed to the UK Department for International Development (DFID) providing £350,000 for a best practice ethics training programme in Nepal and Bangladesh, led by Professors Schuster and Meyer-Sahling, which is now training 1,200 public servants and evaluating its effects in a randomized control trial.

Through large-scale international surveys of civil servants in 10 countries across four continents, Professor Christian Schuster has set international best practice in surveying public servants. The World Bank, the Organisation for Economic Cooperation and Development (OECD) and Colombian government have each changed their approach to surveying civil servants as a result and, more governments are now using surveys as a new channel for hearing employee opinion. The research has also improved employee management practices in a range of countries – for instance recruitment processes in Chile and Kosovo and training practices in Chile and Nepal.