Helping thousands of toddlers in low-income countries reach their potential

Research led by Professor Orazio Attanasio is being used by governments in Colombia, Peru and Ecuador to help improve the lives of hundreds of thousands of children living in poverty. 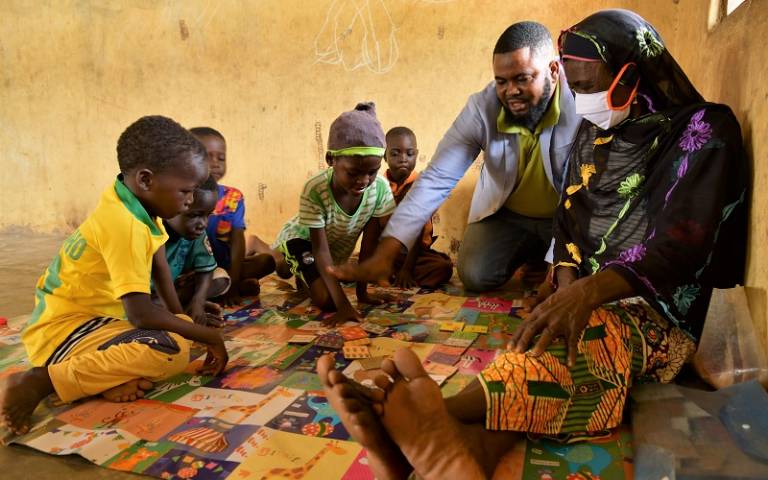 Around 250 million young children living in poverty in low- and middle-income countries do not reach their full developmental potential because of poverty, poor nutrition, and a lack of psychosocial stimulation – the sights, sounds, play and emotional connection provided through an affectionate caregiver-child bond. A team led by UCL Professor of Economics Orazio Attanasio has devised and tested a low-cost solution which is changing the life-course of hundreds of thousands of children across Latin America and beyond.

Care in the community

After 18 months, there was a greater variety of play materials and activities in the homes of the children driven by a change in parental behaviour, along with a marked increase in the children’s cognitive skills. Furthermore, the findings - published in the British Medical Journal and the American Economic Review - showed that the approach, which does not need specialist skills, could be rolled out effectively through existing welfare programmes.

The programme was rolled out in Colombia through FAMI (Familia, Mujer e Infancia) – a public large-scale parenting support service for vulnerable families in rural Colombia. It was praised by Colombian government policymakers for reducing the cognitive gap between wealthy and poor children in the country. The government then used the model to inspire a more evidence-based approach to ECD decision and policymaking in the country.

These impacts were magnified when the Inter-American Development Bank (IADB), seeing the benefits demonstrated in Colombia and scalability of the design, promoted Professor Attanasio’s model to governments, leading to uptake of the programme in Brazil, Peru and Ecuador. Subsequent uptake within these countries has meant improved childcare for hundreds of thousands of children in Latin America.

Such is the programme’s cost-effectiveness and adaptability that it is being expanded on a global scale. This was especially needed in India, where in 2016, 63.4 million   five were reported as being at risk of not reaching their developmental potential – more than any other country. Professor Attanasio’s research within India showed that lower cost group sessions were just as effective as individual home visits, creating further opportunities to expand the programme where funds are limited. Pratham, India’s largest education NGO, has carried out a detailed cost analysis of Attanasio’s model and is exploring the possibility of rolling it out as part of large-scale community programmes in India, potentially impacting millions of children.

Professor Attanasio’s original BMJ paper has been downloaded nearly 15,000 times, and is frequently cited in reports by policymakers, including an IADB book, ‘The Early Years: Child Well-Being and the Role of Public Policy’, and a WHO report on community interventions for child health. Through its international uptake, Professor Attanasio’s research is leading to brighter futures for thousands of children worldwide.

Helping thousands of toddlers in low-income countries reach their potential

Poor Early Childhood Development (ECD) in low- and middle-income countries is a major public problem, preventing an estimated 250 million children under 5 from reaching their developmental potential. Professor Orazio Attanasio’s research has provided a scalable ECD model which has been replicated, adapted, and implemented by governments in Colombia, Peru and Ecuador and is now improving the lives of hundreds of thousands of children living in poverty.