Through media appearances, talks and seminars, UCL’s Dr Ziri Younsi has ignited public interest and awareness of black holes, bringing the research behind the picture to an audience of millions. 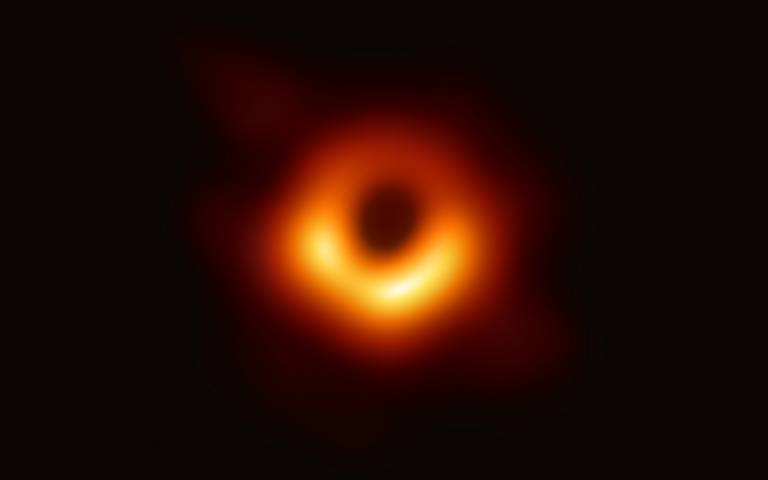 Until recently, nobody had ever seen a black hole and the only way to prove their existence was indirectly. All of that changed in 2019, when the first ever image of one was created by the Event Horizon Telescope (EHT), developed by a team of 60 institutes - including UCL’s Mullard Space Science Laboratory (MSSL) - with the aim of transforming our understanding of black holes.

The EHT’s black hole image was created by using new techniques to link up existing radio telescopes distributed across the globe to create one giant instrument.

With an aperture that is almost the diameter of the Earth, the EHT provides close to the greatest resolving power achievable from the surface of our planet. Research on radiation transport in strong gravity carried out by MSSL’s Dr Ziri Younsi and Professor Kinwah Wu has led to Dr Younsi’s development of physical frameworks and computational tools which contributed directly to the EHT’s ability to visualise material orbiting the black hole at the centre of another galaxy, M87, about 53 million light years from Earth.

Captivating millions around the world

The EHT’s ground-breaking achievement, producing the first ever direct image of a black hole, has captured the public imagination via extensive media coverage across the world, reaching tens of millions of people in the UK and over three billion globally.

Dr Younsi was the sole UK representative from the EHT team, and as such was asked to provide expert scientific commentary on black holes and astrophysics to local and national newspapers, from the Yorkshire Post to the Guardian, entertainment magazines including Rolling Stone and Vice, radio stations, and television programmes including BBC Breakfast, ‘Have I got News for You?’ and a dedicated BBC documentary: ‘How to see a black hole: The Universe’s greatest mystery’.

Because it made history, the Royal Astronomical Society (RAS) and the Royal Mint have chosen the EHT’s image to represent astrophysics on their memorabilia. An artist’s depiction of a black hole, informed by Dr Younsi’s calculations at MSSL, appears on a stamp as part of a collection to commemorate the society’s 200th anniversary, and his calculations feature as cover art throughout a limited edition black hole 50p coin.

Furthermore, the UCL duo delivered talks to thousands of secondary school students between 2015 and 2019, showing the real-life applications of scientific concepts and frameworks and inspiring the next generation of astrophysicists. Through 21 public talks at the likes of the Bloomsbury Festival and European Astrofest, Dr Younsi has helped the public get to grips with black hole research in a more accessible way, with one attendee commenting: “Your presentation was captivating and explained so much background to the audience, and allowed them to understand so much more of what they were looking at.”

The unprecedented level of global teamwork behind the EHT has won its achievement the RAS’s Group Achievement Award (for which Dr Younsi delivered the acceptance talk at the 10th December 2021 RAS Ordinary Meeting).

Following on from this, UBS Bank and the UK Government Department of Work and Pensions have both invited Dr Younsi to give a keynote speech and seminar on new strategies for collaboration on large-scale projects, influencing thinking in both industry and government.

UCL research has contributed to a historic achievement: the first ever image of a black hole. Through media appearances, talks, and seminars, UCL’s Dr Ziri Younsi has ignited public interest and awareness of black holes and the real-life applications of astrophysics, bringing the research behind the picture to an audience of millions.