Documenting, contextualising and planning for an ancient Assyrian heritage site in post-ISIS Iraq 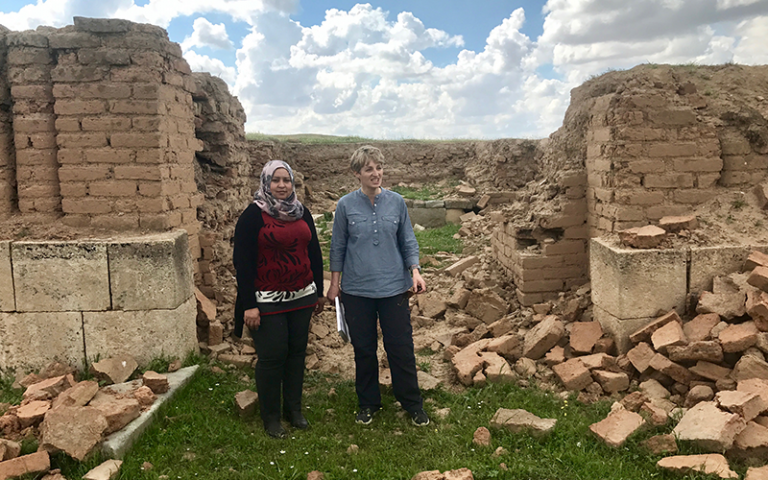 In spring 2015, ISIS/Da’esh released a propaganda video showing their destruction of ancient Assyrian buildings and sculptures at the archaeological site of Nimrud, near Mosul in northern Iraq.

Professor Robson’s research on Nimrud, conducted before and after that event, enabled cultural heritage organisations, news media and policymakers to understand the site’s importance as the world’s first imperial capital in the 9th century BC, and its complex, politicised history over the past two centuries.

She provided expert comment for major news outlets and was commissioned to write an article for the Times Literary Supplement. In it, she argued that saving Iraqi lives and rebuilding the intellectual infrastructure of heritage in Iraq should take precedence over restoration of sites such as Nimrud, which, her research showed, could and should be stabilised and attended to at a later date.

After the liberation of the archaeological site of Nimrud in spring 2017, Professor Robson helped the experts and agencies responsible plan for its protection, stabilisation and future management. Following a site visit in April 2017, her research, site photos and further advice were “extremely helpful to contextualize, guide and prioritise UNESCO safeguarding activities at Nimrud,” according to its then Director.

Professor Robson’s website was ‘foundational’ to the Nimrud Rescue Project (2017–21). This collaboration between Iraqi State Board of Antiquities and Heritage (SBAH), the Iraqi Institute for Conservation of Antiquities and Heritage, and the Smithsonian Institution has trained 29 Iraqi archaeologists to create detailed documentation of the current state of the site, and to safeguard vulnerable elements in anticipation of restoration at a later date.

The world-renowned Iraqi-American sculptor Michael Rakowitz was influenced by Professor Robson’s research, as is especially visible in the production of The Invisible Enemy Should Not Exist, a series of artworks which includes Rakowitz’s fourth plinth sculpture at Trafalgar Square of an ancient Assyrian winged bull destroyed by Da’esh, recreated with date-syrup cans, which received an estimated 15 million visitors annually between March 2018 and March 2020.

In 2017, Professor Robson established the AHRC-GCRF-funded Nahrein Network to support locally-led interdisciplinary research in the role of history, heritage and the humanities in the sustainable economic and social development of post-conflict Iraq and its neighbours, and to advocate for this approach internationally. The Network has funded and mentored 24 research projects in the region, and 15 short-term professional development scholarships to the UK, all on topics put forward and led by Iraqi, Lebanese or Turkish practitioners. Robson has since secured an £11m gift to continue the Network’s activities until 2031.

BBC journalist and producer Maryam Maruf consulted Professor Robson in preparation for two episodes of the programme Museum of Lost Objects, which explores the histories of destroyed or looted antiques. Maryam explained: “I would have struggled to make those programmes without her insights…As a non-historian, it gave me a thorough and instant grasp of that period of Mesopotamian history.”

In spring 2015, ISIS/Da’esh released a propaganda video showing their destruction of ancient Assyrian buildings and sculptures at the archaeological site of Nimrud, near Mosul in northern Iraq. Robson’s research on Nimrud’s ancient and modern history, conducted before and after that event, enabled cultural heritage organisations, news media and policymakers to understand Nimrud’s importance as the world’s first imperial capital in the 9th century BC, and its complex, politicised history over the past two centuries.