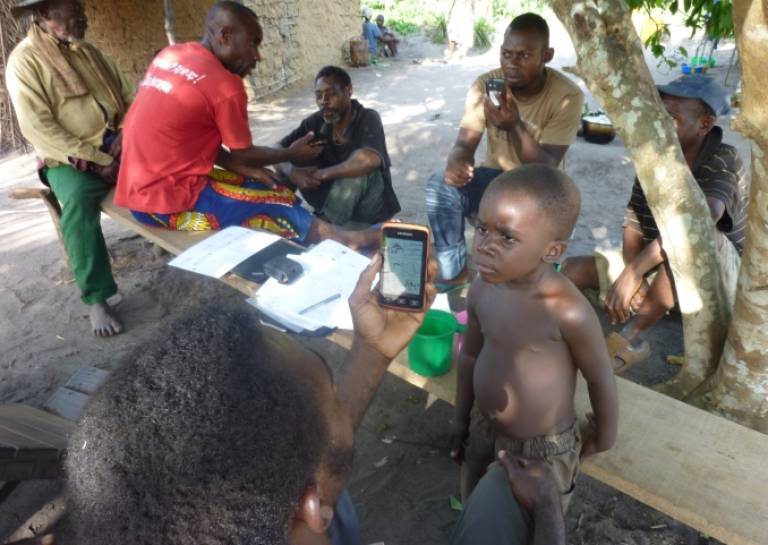 Since 1993, ethnographer Dr Jerome Lewis (UCL Department of Anthropology) has seen first-hand the impact of global and national forces on the lives of indigenous people living in Congo Basin forest communities, as well as the failings of top-down sustainable development and conservation efforts.

Dr Lewis has shown that when marginalised IPLC present their ecological knowledge in more formal ways, their concerns are taken more seriously by environmental managers and law enforcement bodies.

Together with UCL geographer Professor Muki Haklay, Dr Lewis led a diverse team of researchers,  “Extreme Citizen Science (ExCiteS)”, to design a method to engage people in citizen science that is available to anyone, including the non-literate.

The ExCiteS group built on extensive research with IPLCs, culminating in the release of a smartphone app, Sapelli, which allows users to adapt and create their own data collection forms.

Sapelli has been used by indigenous and local people in 11 countries, from forest communities in Cambodia to Masai Warriors in the Masai Mara. It is empowering them to build resistance to an unpredictable climate, record local resources, seek land rights, document illegal activities, protect vital resources and promote new conservation models.

Data collected by the app has led to illegal loggers being arrested, to the creation of new community-defined reserves and to changes to international law.

In Zambia, local people are building maps to show the species distribution of rare orchids that are endangered because of their use in Chikanda, a popular delicacy. Panatal fishers in Brazil have mapped their territories and obtained a 5,000km² community reserve from the Federal Court in Corumba, which has allowed them to keep up their traditional way of life without harming natural resources.

People from more than 100 villages in the Prey Lang Forest, Cambodia, have used Sapelli to scale up work to stop illegal logging, uploading thousands of observations on natural resources and illegal logging to the cloud. Chainsaws have been seized, illegal loggers arrested, and in 2016 the Cambodian government protected 430,000 acres of forest.

Inspired by his Newton Prize-winning project to support Guarani people in reforesting Brazil’s Atlantic coast through partnerships with local NGOs, Dr Lewis developed the concept of ‘Flourishing Diversity’, that life on Earth is possible because of both cultural and biological diversity.

This sparked the Flourishing Diversity series that brought representatives from indigenous groups worldwide to London to speak to an audience of public, students, activists, lawyers and academics. Media and online coverage, helped along with the involvement of high-profile artists such as Benedict Cumberbatch, brought this to an audience of 7.6 million people.

The series has highlighted the role that cultural diversity plays in sustaining biodiversity, leading to updated charity funding programmes and activist strategies.

Conservation charity Synchronicity Earth is helping establish a dedicated Flourishing Diversity charity, and the concept is embedded into the agenda of the IUCN’s World Conservation Congress.

Extinction Rebellion Youth adopted Flourishing Diversity in 2019 and now has working partnerships with indigenous peoples that enact change; for example, with the Guarani people of Brazil they campaigned to overturn a government directive giving lands that were not claimed as indigenous prior to 1988 to miners and loggers.

Climate change and human activity are causing rapid environmental change and loss of biodiversity even in the world’s most remote corners. Dr Jerome Lewis has worked with non-literate indigenous communities to develop a smart phone app, ‘Sapelli’ to support locals to monitor and protect resources.  Data collected by the app has led to illegal loggers being arrested, to the creation of new community-defined reserves and to changes to international law. Lewis’s Flourishing Diversity Series has also highlighted the role that cultural diversity plays in sustaining biodiversity, leading to updated charity funding programmes and activist strategies