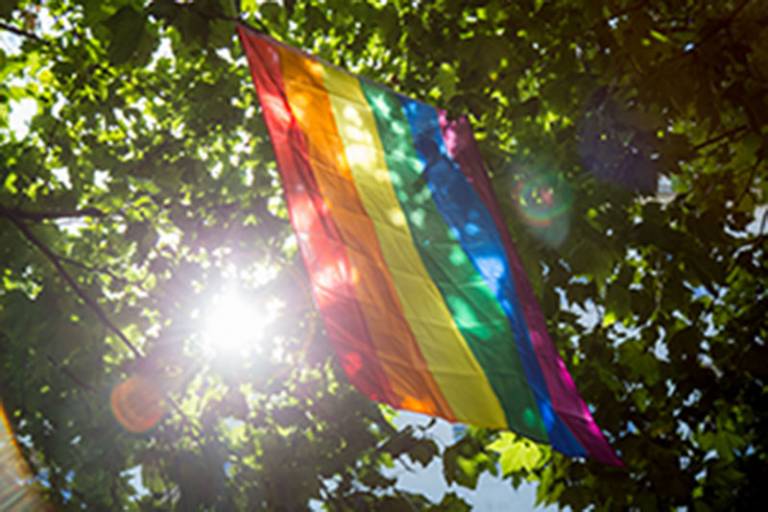 'The sun was out, and I had a date – I was extremely excited to be attending my first Pride. As I had come out around 18 months previously it was a huge deal for me. I had arranged to meet up with some 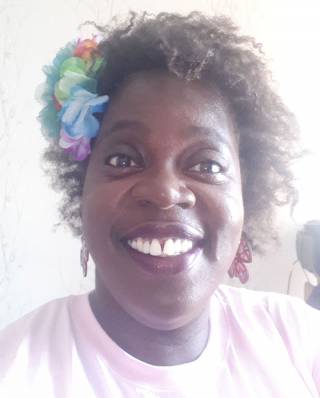 friends at a pub later in the day, but it was wonderful to be part of the actual march with Out@UCL, to have a ‘uniform’ in the form of a bright pink t-shirt emblazoned with the Pride flag, along with flags, flowers and fans all provided by Out@UCL.

A boozy pre-march brunch had been arranged, which was a perfect start to the day. Somebody was on hand to paint our faces to ensure that we looked our most fabulous best. Everyone was happy, friendly and smiling, my date arrived in good time, and after a bit of food and a few gins we set off to a nearby park. We took some pictures then made our way to the area where all the groups in the parade were to wait until it was time to set off.

The atmosphere was electric, music was playing from the surrounding floats, so we danced and sang while we waited. Many of us were a little tipsy! I met a lovely man who I won’t name but it was his first Pride too and we bonded over that. Before long the group in front of us started to move and we fell into place behind them. I felt a little sick with excitement. As we approached the BBC building the crowds on either side of us got thicker and they cheered, waved their flags, raised their fists in support . . . for me, it was a little overwhelming. But in the best possible way! My feet barely touched the ground. I laughed and smiled so much that my cheeks were hurting before we got halfway through the route.

I can’t clearly articulate what it meant for me to be able to march with UCL. I had been in the closet for decades, living in fear of the world’s reaction to the real me, and that day showed me that the whole world wasn’t against me. My usual anxiety disappeared as apparently, thousands of people were on my side. Random people wanted to take pictures of me/us, to shake hands, or to hug, which sounds like total madness in the current climate! I felt very much part of a community, who enveloped me in a big queer UCL hug. My first Pride was a massive success, largely because of Out@UCL. We even had drinks arranged for afterwards on a rooftop terrace!

I can’t thank Out@UCL enough for all their hard work organising the event, it was a magical, unforgettable day. Shout out to Anne, Neil, Sandy and everyone else involved.'