The fossil evidence of hominins in China is crucial to understand the human evolution and dispersal in Eurasia. 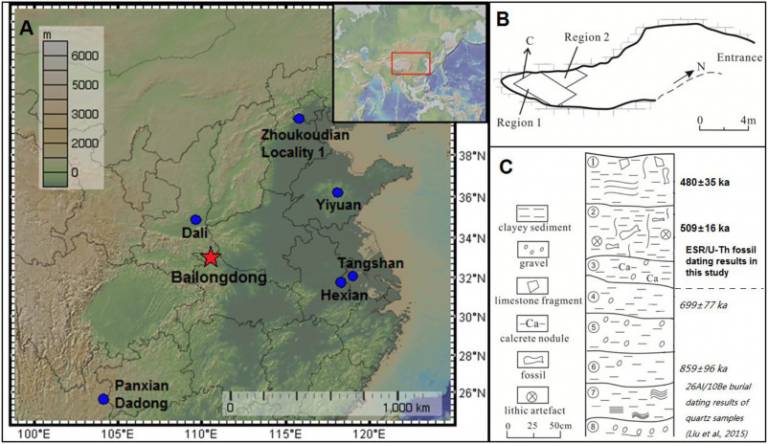 However, the dating of Chinese Early and Middle Pleistocene hominin record remains a serious problem. In this study, we applied coupled ESR/U-series dating method on Bailongdong hominin cave site in Hubei Province, central China, which is a key area to study early human migration between South and North China. The U-series analyses show that the fossil teeth samples from three horizons are close or beyond equilibrium, which indicate very early uptake or potential loss of uranium. Single saturation exponential fitting of 10 dose points irradiated up to 4 kGy was used for DE determination except one by double saturation exponential fitting with 16 dose points up to 63 kGy. Calculated by two uranium migration models, we obtain a weighted mean age of 509 ± 16 ka for five fossil teeth from layer 2. Combined with cosmogenic nuclides 26Al/10Be burial dating carried out on the cave deposits beneath the fossil layers in previous study, the multi-methods dating study places Bailongdong site at the early stage of Middle Pleistocene, and pinpoints the deposition of the fossil remains to the time of marine isotope stages 13. This is in agreement with the fauna composition and sedimentary characteristics which show a subtropical-tropical warm forest-grass environment. The multi-methods dating of Bailongdong site by both cosmogenic and coupled ESR/U-series methods is a good example for the future chronological studies of early human sites in China.