The Cueva del Angel (Lucena, Spain) is an open-air archaeological site with a sedimentary sequence remnant of a collapsed rock shelter which was part of a still active karst complex. 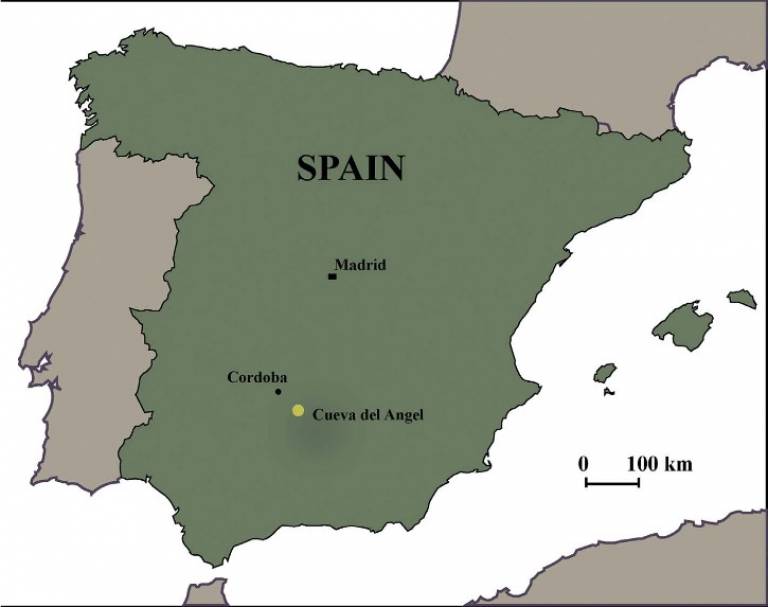 The lithic assemblage consists essentially of abundant retouched tools including 46 identified handaxes along with non-modified flakes, and is associated with faunal remains dominated by Equus ferus and other large bovids and cervids. A large proportion of bones has undergone intense anthropic actions and been subjected to intense fire, thus evidencing sustained use of animal meat resources by humans.

In order to better ascertain the chronological framework of the site, we dated several proxies. Various speleothem samples were processed by U-series using a coupled induced plasma mass spectrometer (ICPMS-MC). The resulting isotopic ratios are beyond the secular equilibrium and show that these samples do not appear to be in direct stratigraphic relation with the archaeological sequence.

Nine Equus teeth were analyzed by the combined ESR/U-series method. These samples were taken from Unit I to Unit XVI representing at least 2.5 m of stratigraphic depth and approximately 90% of the infilling. Many of the dated samples are burnt given that more than 85% of the faunal remains exhibit traces of fire exposure.

The bone retouchers, for which a comparative analysis with other sites has been published (Moigne et al., 2016), were probably produced during the Marine Isotope Stage (MIS 11-5) chronological interval corresponding to the later part of the Middle Pleistocene, inference that is in agreement with the palaeontological assemblage of the site. The radiometric results presented here are consistent and indicate a range from 350 to 183 ka, suggesting that a major part of the sedimentary infilling coinciding with the human occupation was contemporaneous with the MIS 9 to 7 time period.