The state of our knowledge concerning the geographic routes through which hominins spread out of Africa remains incomplete. 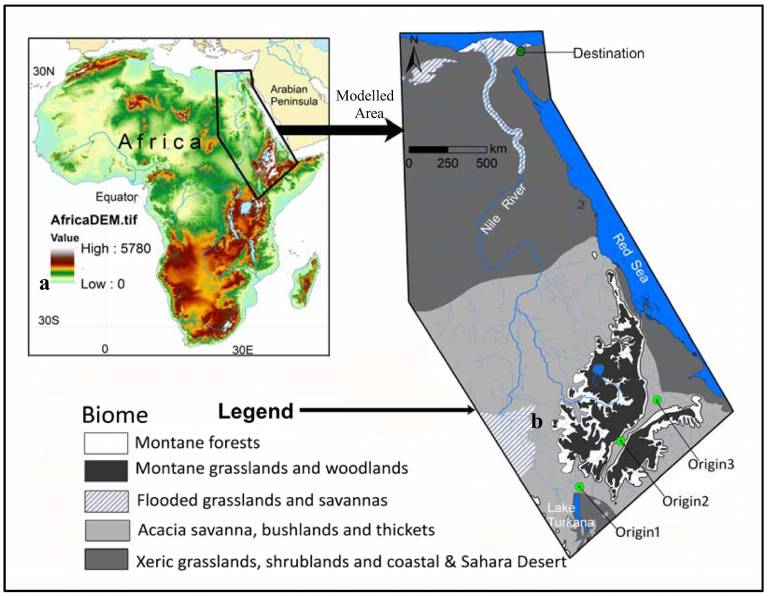 The Nile basin (Northern Route) and the Strait of Bab al-Mandab (Southern Route) have been commonly cited as the likely Out-of-Africa dispersal paths, although the degree to which these routes were always accessible is unclear. This paper seeks to identify areas that may have served as viable routes for hominin dispersals from eastern Africa into the Levant using analytical tools within a Geographic Information System (GIS). We employed a heuristic model that would find the Least Cost Paths (LCPs) from three hypothetical origin points in the Ethiopian-Afar Rift basins to a predefined destination point on the Sinai Peninsula (a gateway to Eurasia). Three input variables, namely topographic roughness, drainage density and elevation were used in creating the LCP model. All of the resulting LCPs have travelled through the Nile basin, reinforcing the Northern Route hypothesis. It is also interesting to observe that all the LCPs have crossed the western highlands of Ethiopia before converging at the Nile, lending support to the recently proposed "Mountain Exile Hypothesis" (Vogelsang, 2018). This region had seen little Paleolithic research in the past, thus our model provides a critically needed baseline for future systematic fieldwork there.