Hominin evolution featured shifts from a trunk shape suitable for climbing and housing a large gut to a trunk adapted to bipedalism and higher quality diets. 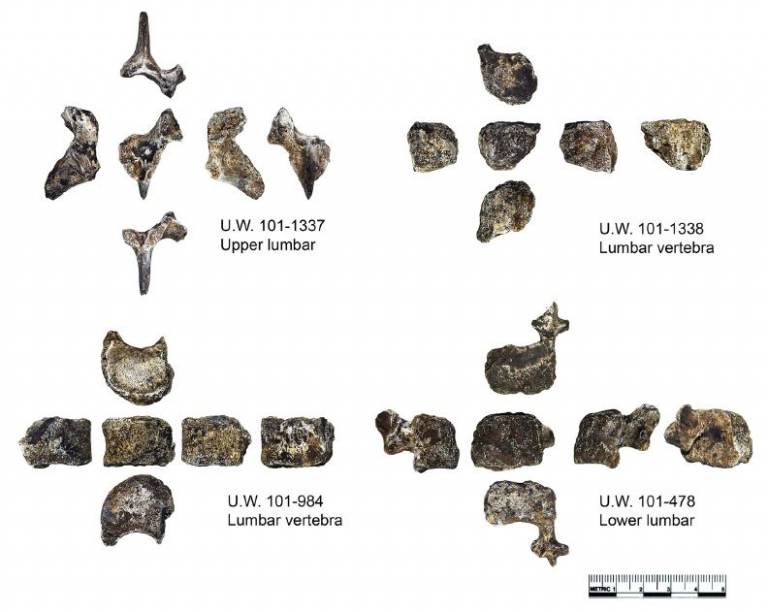 Our knowledge regarding the tempo, mode, and context in which these derived traits evolved has been limited, based largely on a small-bodied Australopithecus partial skeleton (A.L. 288-1; "Lucy") and a juvenile Homo erectus skeleton (KNM-WT 15000; "Turkana Boy"). Two recent discoveries, of a large-bodied Australopithecus afarensis (KSD-VP-1/1) and two Australopithecus sediba partial skeletons (MH1 and MH2), have added to our understanding of thorax evolution; however, little is known about thorax morphology in early Homo. Here a team of palaeoanthropologists describe hominin vertebrae, ribs, and sternal remains from the Dinaledi chamber of the Rising Star cave system attributed to Homo naledi. Although the remains are highly fragmented, the best-preserved specimens-two lower thoracic vertebrae and a lower rib-were found in association and belong to a small-bodied individual. A second lower rib may belong to this individual as well. All four of these individual elements are amongst the smallest known in the hominin fossil record. H. naledi is characterized by robust, relatively uncurved lower ribs and a relatively large spinal canal. The team expect that the recovery of additional material from Rising Star Cave will clarify the nature of these traits and shed light on H. naledi functional morphology and phylogeny.

The vertebrae and ribs of Homo naledi