My Journey as a Historian – Professor Eleanor Robson

So here’s the thing: I never planned to be an academic, and I certainly never meant to be a historian. My highest qualification in History is an ‘O’-Level, taken at the age of 15 in the mid-1980s. I might be the least-qualified Head of a History Department in the country. I shed any sense of imposter syndrome long ago though. Instead, I think my personal journey shows that there’s no one right way to be a historian and no core set of knowledge that’s required. Rather, it’s about putting one’s intellectual curiosity, independent-mindedness, and sense of purpose to work. 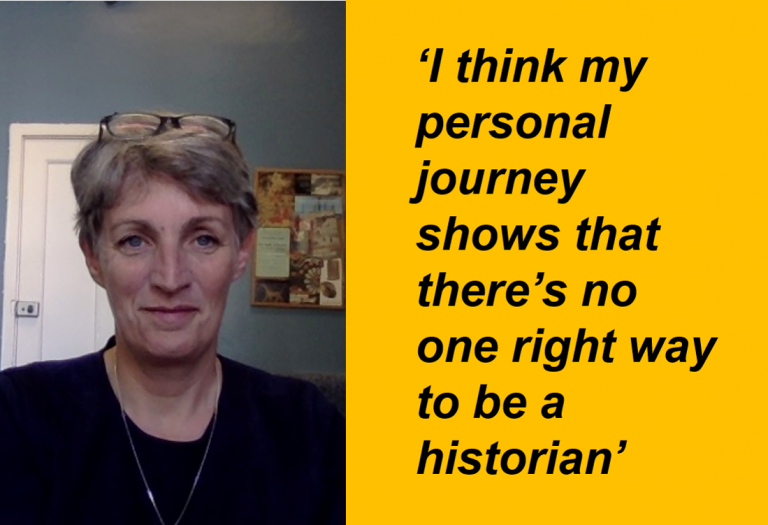 I come from what used to be called a broken home: chaotic, emotionally unpredictable, and financially insecure. Several close family members had quite challenging, untreated mental health problems, which, by my early teens, meant that they were very hard to live with. School — my very ordinary but supportive local comprehensive — was one lifeline; books were another. Friends’ homes and, later, babysitting gigs, were my refuge. I could get lost in a novel, or the beautiful orderliness of my maths homework or French verbs. School history was tedious in the extreme though, just lots of very dull facts about 19th-century Britain, and one of my few brushes with trouble came when I stupidly wrote about how bored I was in the back of my history exercise book.

All that homework-as-home-avoidance made me rather precocious and so in my mid-teens, school sent me on various enrichment programmes for what we would now call Widening Participation students: a series of Saturday maths mornings at Hertfordshire Poly (which I completely adored); a maths weekend(I think?) at Eton, of all places (which I completely didn’t). But school really wasn’t set up to prepare students for university and I knew that I desperately wanted to go.

So, off to the local Further Education College for A-Levels in maths, physics, chemistry and French; then a place at Warwick to study maths. University was just heaven and my programme was set up so that I could continue to dabble in languages — a bit of Spanish, Russian and Italian — but I never really made the conceptual transition to degree-level maths. Maybe I no longer needed it, now that I’d left home for good, or maybe I just didn’t have the capacity to think at that level of n-dimensional abstraction. In any case, in my final year, scraping the II.ii–II.i borderline, I leapt at the opportunity to take a module in history of maths, for the simple, shallow reason that it counted towards the 50% minimum of compulsory maths modules but obviously (to me) wasn’t real maths.

I could write a whole book on how that one module changed my life. The tutor, David Fowler, was a convert to ancient Greek mathematics, so we focused heavily on the ancient world. He made us read Carr’s What is History?, which blew my mind. I volunteered to give one of the first presentations, in order to get the ordeal of public speaking out of the way. I was given a week to put together a 10-minute talk on Babylonian mathematics, and that was how it all began. In that week I fell in love. I was obsessed: how could ‘maths’ be so utterly different to everything I’d learned so far? Why were researchers treating the translations as their sources, not the original texts, and trying to make it look as much like modern algebra as they could? Where and when was Babylon anyway? And who the heck had actually written this stuff? So many puzzles and worries that I couldn’t quite articulate, that 10 minutes really wasn’t enough.

Above: Celebrating David Fowler’s 60th birthday with his wife Denise and a cake in the form of an ancient Greek times table, Warwick, April 1997

To cut a very long story short, I not only wrote my history of maths essay on Babylonian maths that year but also persuaded the degree committee that my final-year dissertation should be on a historical topic too. Together those marks (and some non-maths options) saved me from a II.ii. Knowing only that I didn’t want to become an accountant or actuary like most of my friends, I set out to learn the Babylonian language and cuneiform script, to get it out of my system before knuckling down a real job. In those pre-internet days, the only place I found that was prepared to take me on as a part-time graduate student was the Oriental Institute at the University of Oxford. Jeremy Black, my supervisor-to-be, had just taken up his post, had no students and couldn’t afford to be fussy. (Cambridge and London both rejected me out of hand.)

I arrived in Oxford penniless in the summer of 1990 and scrabbled together a series of part-time shop jobs and bar work to make ends meet. I knew no-one, read all the books in the public library on Iraq and on Babylon, and listened to radio reports of Iraq’s invasion of Kuwait.

Apart from the impending doom of all-out war, it was bliss – until the new academic year began. There’d been one token posh kid on my course at Warwick. Now my world was awash with self-confident and moneyed young persons who operated in entirely alien and alienating ways. ‘But of course, I’m sure you went to the sort of state school that taught Greek and Latin!’ Errr, no. Fortunately, Jeremy was every bit as kind and inspiring as David had been and I eventually found ways to screen out the Bullingdon types. Learning Babylonian was the hardest thing I’d ever done, and the most exciting and rewarding. The first time I read 4000-year-old letters from real people to other real people and they actually made sense was just astonishingly empowering. And through the archaeology and history I was starting to see that contextualisation would be the key to solving my big question: not just to describe Babylonian mathematics but to account for its very existence. 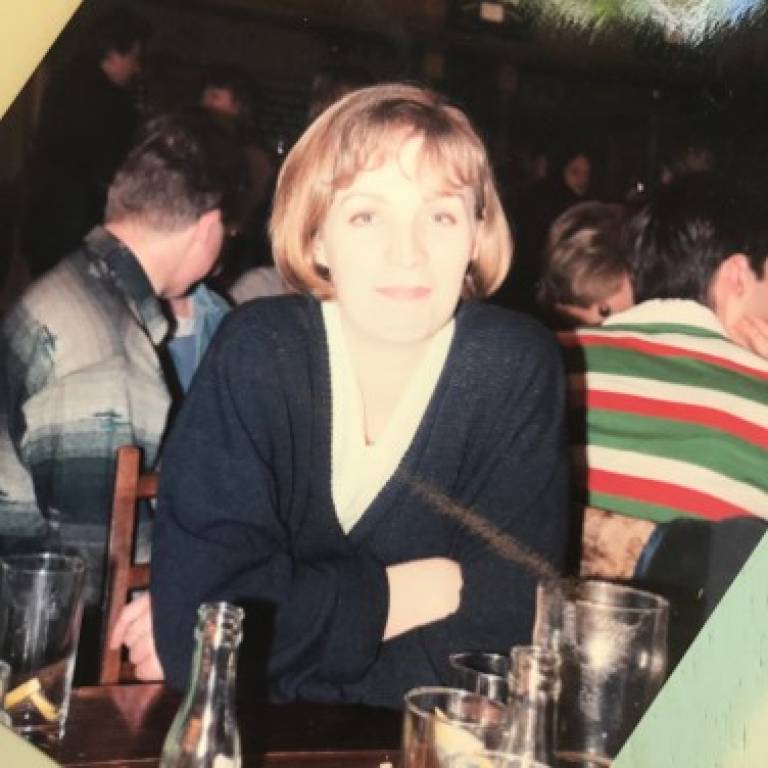 Above: Eleanor in the pub on the night of her DPhil viva, Oxford, December 1995

That was a challenge that took over fifteen years to tackle. That’s not what I planned, but it’s gradually what happened. My 2008 book, Mathematics in ancient Iraq: A Social History, was written for my 20-year-old self. Along the way I earned a doctorate in Oriental Studies in 1995, finally travelled to Iraq in 2001, campaigned against the Iraq War in 2003, and took up a permanent lecturing position at Cambridge in History and Philosophy of Science in 2004. It was hard to adjust to at first, as I had no idea who or what many of my new colleagues were talking about most of the time. But it was a joy, as well as a challenge, to think my way into an entirely different disciplinary context, because it gave me a new conceptual vocabulary in which to articulate ideas I had previously been fumbling for but had not been able to express. 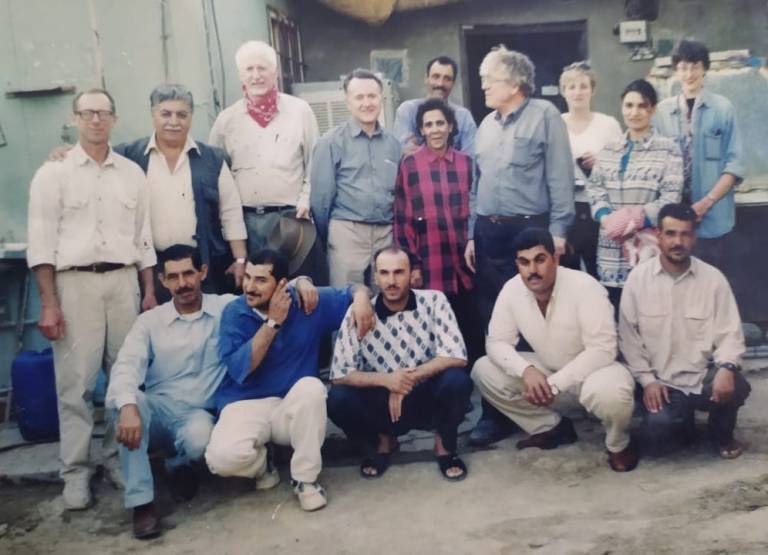 Above: With Jeremy Black and colleagues in Iraq, March 2001 (Jeremy: back row, fourth from left; Eleanor: back row, third from right)

David and Jeremy—who never met—died within 10 days of each other, just a few months after I moved to Cambridge. I miss both of them still, and make a conscious effort every day to live up to their ideals and expectations. David had campaigned for Amnesty International; Jeremy had spent the 1990s helping Iraqi colleagues survive, and escape from, Saddam’s regime; both were passionately anti-war. I’d like to think, if they were still alive, that they’d both approve of the activist-research of the Nahrein Network, which aims to rehabilitate and re-centre the role of local experts in the production and uses of history, heritage and humanities in post-conflict Iraq today.