Michael Clanchy, the great medieval historian, and a former teacher and member of UCL History Department, died last week at the age of 84. David d’Avray and John Sabapathy have written a short memoir of his life as a historian and teacher. 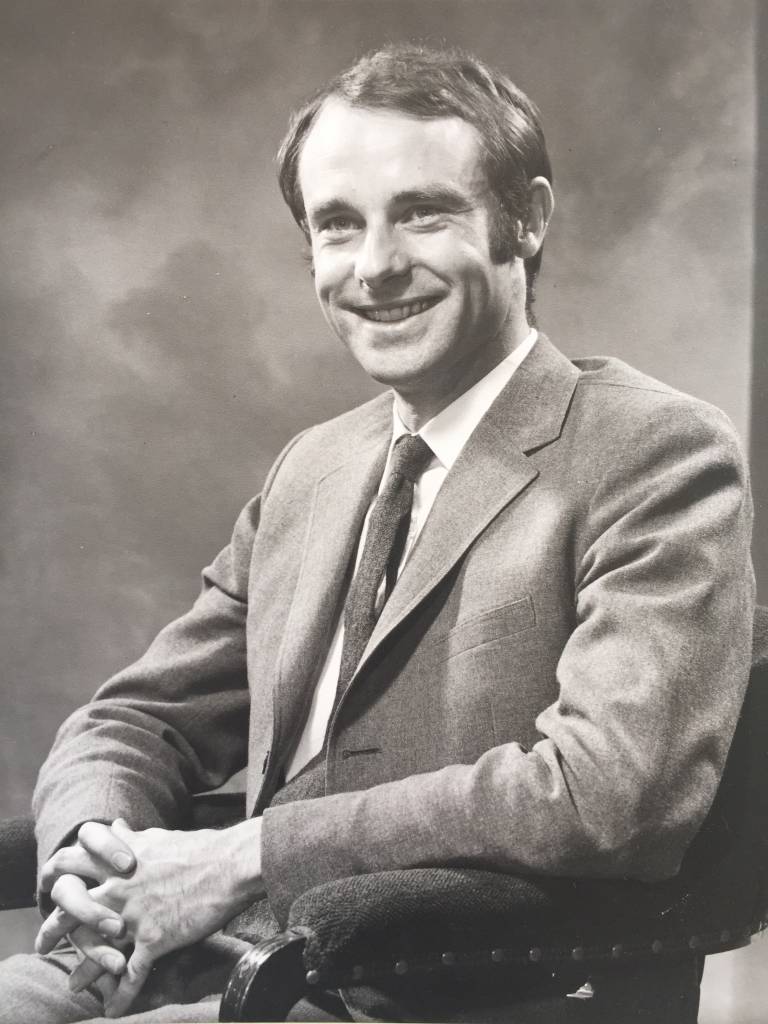 Michael Clanchy was keen on the Middle Ages from his prep school days.  He used to cycle large distances, with his elder brother, John, to do brass rubbings in Berkshire Churches. At Ampleforth, his boarding school, his interest in history was encouraged by his teacher, Basil Hume. His undergraduate degree was at Merton College Oxford, a seed ground for future famous historians (an exact contemporary was Henry Mayr-Harting.) His tutor at Merton was R. H. C. Davis, who was to have an important influence on his early career. It was at Oxford that he met his future wife, Joan, a fellow historian, who would become one of the top school heads in Britain. Michael’s intellectual initiative was made evident as an undergraduate by a research trip to investigate papal Avignon. Without funding to continue on to doctoral research, he took a job as a teacher, while doing a part time PhD at the University of Reading, then a major centre of medieval history thanks to Frank and Doris Stenton. Michael’s doctoral work was in a tradition of editing English royal-county records started by Doris Stenton. In the first instance it led to his first two volumes, Civil Pleas of the Wiltshire Eyre, 1249 (Devizes, 1971) and Roll and Writ File of the Berkshire Eyre (London, 1973). This was impressive technical work. Michael overcame the difficulties with flair, using a later formulary to facilitate transcription and a gazetteer to identify place names. This research was enough to launch his university career, at the University of Glasgow, where he became a lecturer in 1964.There was a strong medieval history tradition at Glasgow.  Patrick Wormald joined the department in 1974 and became a great friend.

Oddly, Michael’s job at Glasgow was to teach not English but Continental European History, yet the seeds of a major interpretation of English governmental and social history planted by his doctoral work were germinating. In his editions, he had noticed how many thirteenth century knights were expected as a matter of course to deal with documents while conducting county business. At the same time he was becoming aware of the work on literacy done by anthropologists, above all Jack Goody. (Interest in social anthropology was characteristic of cutting-edge historians of Michael’s generation. He was known to travel to Manchester to attend the seminars of the powerful group around Max Gluckman.) The fruit of this convergence of thoughts prompted by editing documents and anthropological parallels was his famous book From Memory to Written Record: England 1066-1307 (1979). This traced the ‘information technology’ revolution from an age when written documents were more sacral than pragmatic, and where a knife could count as a record of a transaction, to the massive expansion of record-keeping in England in the thirteenth century and afterwards. Typical of Michael was his use of records of sealing wax purchased to track the expansion of documentary production. The pattern Michael observed had been noticed earlier in a short essay by V. H. Galbraith and for the papacy in a seminal article by Alexander Murray, but Michael not only gave it the full scale treatment it deserved, but also turned it into a study of the emergence of a literate mentality – those county knights using documents! His book was a not only a study of government records but an analysis of a social and cultural transformation. It is hard to exaggerate how influential From Memory to Written Record remains – not only directly in British historiography, but also in multiple continental historiographies where its third edition continues to do real work.

This was a good time. The importance of the book was gradually recognized. Michael was made a Reader and one assumes that a Chair would have followed before long. Joan (herself a Scot) had become headmistress of a leading school in Edinburgh, St George’s, in 1976.  Their jobs were within commuting distance. They had two children, Kate and James (both of whom achieved subsequent significant success in widely different fields.) A few years after From Memory to Written Record,  Michael brought out a classic textbook, England and its Rulers, 1066-1272 (1983), taken up to 1307 in a subsequent edition (there are four in all, so far). Anyone who uses this book for teaching will be grateful to it for its combination of student-friendly clarity with deep insight.

In 1985, Joan was appointed head of the North London Collegiate School, one of the best schools in Britain. Michael moved down South to prepare the way and supervise the work on their new house in West Hampstead. This turned out to be a terrible time, combatting dry rot and making improvements competed for his attention with book contracts and other commitments but without the job security which he had enjoyed in Glasgow for 21 years. Michael was thrown into depression, an illness (as he rightly called it) that periodically revisited him after that. They had come to London in the early years of the Thatcher freeze of university appointments, so that even so great a historian as Michael really had no chance of getting a commensurate post, though he held an honorary position at Westfield College and did a number of years of greatly appreciated teaching for University College London, warmly remembered by those who experienced it. Still, he was essentially an independent scholar, without the external recognition that he so obviously deserved. This was not anyone’s fault, but was symptomatic of an unhappy phase in British university history. It is a tribute to Michael, to his creativity and determination, and to Joan’s unwavering support despite the pressures of her demanding job, that he managed to go on producing wonderful books.

In its way as remarkable as From Memory to Written Record was Abelard: A Medieval Life (1997), on the strength of which Michael would be elected a Fellow of the British Academy two years later. Abelard was no ordinary biography. Iconoclast, intellectual, and controversialist, Peter Abelard (c.1079–1142) was one of the most extraordinary men of his time, perhaps of any time. Abelard would not have been surprised to find the Penguin edition of his correspondence with Heloise, revised by Michael, on the table of a mafia boss’s wife in a famous TV series, or to know that modern scholars still study his thought intensely. It took a historian of no ordinary gifts to do justice to a man like Abelard. Michael showed Abelard’s volatility by inspecting the successsion of roles Abelard adopted, (master, lover, man, heretic etc.). He was helped by having taught Abelard to his Glasgow students (he dedicated the book to them), but there was something about Michael’s own mind that made him equal to the task – les grands esprits se rencontrent.

Distinct from, but complementing the books, were the articles, including a large number of instant classics. One of Michael’s last historiographical preoccupations melded his interests in literacy and gender to examine the role of women, especially mothers, in teaching medieval children to read. Those articles were brought together in 2018, but a collection of his wonderful articles on legal and political history remains unpublished. Perhaps what is most remarkable about these articles was Michael’s ability to make legal history come alive in ways which legal historians do not always find easy. It captures his facility perfectly that one of those articles is elegantly titled ‘Law and love in the Middle Ages’. That was an alluring title for academic lawyers writing histories of arbitration. It speaks to Michael’s sense of humour that it amused him that it was, therefore, his most cited article.

For many years both before and after he and Joan returned to Oxford, Michael was a regular attender at the Wednesday ‘Earlier Middle Ages’ seminar at the University of London’s Institute of Historical Research (IHR), where scholars and graduate students from all the London colleges and from outside met. He arrived at about the same time as Susan Reynolds, joining a group already sparkling with historians like Jinty Nelson, John Gillingham and Wendy Davies. Even such a brilliant group gained lustre from the participation of Michael. Late in the day, the IHR’s Secretary realised that it would be possible to make Michael a London University Professor on a fractional contract, a welcome solution to an unhappy problem.

The IHR was a key base for Michael in his London years, and after. Successive generations of younger graduate students met him here, at seminars, or in the IHR common room. To them he was unfailingly kind and attentive, reading drafts of articles or PhD chapters, discussing ideas, handing on notes and references on his index cards. Michael dedicated From Memory to Written Record to his own former tutor Ralph Davis, as ‘my friend and teacher‘. Many London graduate students will remember Michael likewise. The number of students transformed by the unformalized generosity of these discussions outnumbers the group he could have formally supervised during those years. There is, indeed, a parallel between Michael and those earlier quasi-itinerant masters who inspired affection and devotion amongst their pupils, masters such as Abelard himself.

By the time he had joined the London medieval scene, Michael’s international reputation was already assured. At the Clanchys, one might meet Jacques Le Goff or Aron Gurevich, legends in their lifetime – like Michael. If one did not meet them there, one heard about them. He was a gleeful storyteller, with wonderful stories – taking the Russian Gurevich around Lincoln’s Inn Fields to see the hierarchy of nameplates on the staircases; accounts of explosive conversations with Sir Richard Southern about who had most influenced Southern’s ideas.

Returning to Oxford, Michael found a welcome and welcoming base at his former College, Merton, where he was given membership of the Senior Common room and a fob to get into the library at any time. A few years before his death, Michael gave a paper to the main Oxford medieval graduate seminar. Unsurprisingly, attendance was like a mass rally. Nobody of his generation had a mind quite like Michael’s.

Michael died at home, following a stroke, two weeks after Joan’s death, and is survived by his children and five grandchildren.