EEE Festival of Research and the Mildner Lecture

UCL Electronic and Electrical Engineering invites all our friends, colleagues, collaborators and members of the public, to explore the research being undertaken within our world-leading department and celebrate our continuing advancement of knowledge.

UCL Electronic and Electrical Engineering (EEE) is a centre of world-class research. At the EEE Research Festival we will inform and inspire with research posters, academic talks, opportunities for networking - culminating in our biennial invited Mildner lecture.

Following the Mildner lecture is a celebratory dinner for attendance by invite only. This will be at the Royal National Hotel close to campus, the meal will begin at approximately 7pm.

A highlight of the day is our poster presentations delivered by the entirety of our research student cohort. With Centre’s for Doctoral Training across subjects including Photonics, Quantum Technologies and Advanced Materials Characterisation, along with students undertaking research across the breadth of our work, this session will engage you in research and outputs that are developing the future of Electronic and Electrical Engineering and it’s applications.

This session is also open to members of the public with an interest in the technical nuances of electronic and electrical engineering, so join us for an afternoon of knowledge gathering and innovation.

Academic talks will present the cutting edge research of the department. Talks will be split into sessions, with each session focusing on a particular theme.  A comprehensive list of sessions, session chairs, associated talks and abstracts will be provided soon. Current confirmed talks include:

Filipe Ferreira is currently a UKRI Future Leaders Fellow. He has been awarded £1.2 million over the next four years to develop new technologies for expanding Internet capacity – he aims to exploit massive spatial parallelism in multi-mode optical fibres by merging spatial light modulation with machine learning. He is the author and co-author of over 90 international peer-reviewed journal and conference papers with numerous prestigious invited papers. He has also given over 10 invited talks at several international conferences and industrial workshops including ECOC/OFC

Professor Liu's general interest concentrates on the nanometre-scale engineering of low-dimensional semiconductor structures (such as quantum dots, quantum wires, and quantum wells) by using molecular beam epitaxy and the development of novel optoelectronic devices including lasers, detectors, and modulators by developing novel device process techniques. He has co-authored over 120 peer-reviewed journal papers in the area of semiconductor materials and devices.

Ioannis received his Diploma in Electrical and Computer Engineering from the National Technical University of Athens and his PhD in Optical Interconnects from University College London in 2008. In 2008-2009, he worked for Sharp Laboratories of Europe, investigating sub-wavelength diffractive films fabricated by nanoimprint lithography to improve the brightness, uniformity and power consumption of liquid crystal displays. He joined CERN-European Organisation for Nuclear Research in 2009, where he worked on optical fibre links for the distribution of timing-trigger and control signals in the Large Hadron Collider. He was appointed as a Lecturer in the Electronic and Electrical Engineering Department at UCL in 2011, where he founded the Photonic Innovations Lab. He was promoted to Senior Lecturer in 2015.

Dr Mehonic received a BSc in Electronic Engineering from the University of Sarajevo in 2009 and was awarded the Golden Badge, the best student award. He graduated from University College London (UCL) with an MSc in Nanotechnology (Distinction, Oxford Instruments prize for the best MSc project) in 2010 and PhD in 2014 (top 3 best PhD thesis in 2013/14, EE Department), demonstrating the first ambient operating all-SiOx memristor. In 2017, he was awarded a highly prestigious 5-year Royal Academy of Engineering Research Fellowship to work on neuromorphic technology for energy-efficient AI hardware. In 2019, he was appointed as a Lecturer in Nanoelectronics. He serves on the advisory boards of Wiley’s Adv. Intelligent Systems and is an Editor for Frontiers in Materials and Frontiers in Nanotechnology.

Dr. Toni received her M.S. and PhD degrees, both in electrical engineering, from the University of Bologna, Italy, in 2005 and 2009, respectively. During 2007, she was a visiting scholar at the University of California at San Diego (UCSD), CA, and since 2009, she has been a frequent visitor to the UCSD, working with Prof. Pamela Cosman and Prof. Laurence Milstein on joint-source and channel coding for wireless communication systems.

Sarah Spurgeon is Head of the Department of Electronic and Electrical Engineering and Professor of Control Engineering at UCL. Her research interests are in the area of systems modelling and analysis, robust control and estimation in which areas she has published over 300 research papers. She was awarded the Honeywell International Medal for 'distinguished contribution as a control and measurement technologist to developing the theory of control' in 2010 and an IEEE Millennium Medal in 2000.

Dr. Matthew Ritchie is a Lecturer in the Radar Sensing group of EEE at UCL. He completed an Eng.D degree at University College London (UCL), in association with Thales U.K., in 2013. In 2017 Dr. Ritchie took a Radar Scientist position at the Defence Science and Technology Laboratories (Dstl) which also involved working as the Team Leader for the Radar Sensing group in the Cyber and Information Systems Division. He currently serves as the Chair of the IEEE Aerospace and System Society (AESS) for United Kingdom & Ireland, Associate Editor for the IET Electronics Letters journal and chair of the UK EMSIG group. He was awarded the 2017 IET RSN best paper award as well as the Bob Hill Award at the 2015 IEEE International Radar Conference.

Professor Jackman heads UCL’s Diamond Electronics team whose laboratories are within the London Centre for Nanotechnology (LCN, london-nano.com) Diamond is widely known as a gemstone, but few people appreciate that the use of this incredible material for purely decorative purposes is to truly waste an important Engineering material. Within the department of Electronic and Electrical Engineering, Richard has undertaken various roles Undergraduate Tutor, Undergraduate Admissions Tutor, Director of the MSc programme ‘Microwave and Optoelectronics’ and Director of the Masters Programme in Nanotechnology.

Izzat currently holds the University of London Chair of Communications Engineering and leads the 70-strong Communications and Information Systems Group in the Department of Electronic and Electrical Engineering at University College London. He has authored or coauthored more than 250 book chapters and papers in the areas of optical and wireless communications and monolithic microwave integrated circuits and high-speed/frequency circuits. He coedited Analogue Optical Fibre Communications (IEE, 1995) and was a coeditor of the 2008 Elsevier-Newness book on electrical engineering. He has also co-authored two books entitled, 'On Linear Circuit Analysis and Modelling' (Elsevier, 2005) and, 'Microwave Active Circuit Analysis and Design' (Academic Press, 2015). He currently teaches mobile and wireless communications and circuit design, and his research activities include ultrahigh-speed microwave circuits and wireless and optical communication systems. In 2003, he proposed (with M. Rodrigues) the Spectrally Efficient Frequency-Division Multiplexing (SEFDM) concept and has been working in this area since then.

Following the talks and poster presentations, we will hold a reception in the UCL Jeremy Bentham Room. The reception provides an opportunity for our members of the department and partners across academia and industry to congratulate and network with the research students who will have spent the earlier part of the day presenting their posters.

Following an afternoon exploring EEE’s research, guests and members of the Department will move to the Darwin Lecture Theatre. The Head of Department, Professor Sarah Spurgeon, will welcome guests followed by the presentation of the following awards:

Awarded for the best thesis of a recently graduated PhD student, in honour of Professor Fabrizo Lombardi, former MSc and PhD student of the department.

Awarded for the best student poster, in memory of Professor Alexander Cullen, former head of department and Faraday Medal recipient.

Presented by Simon Knowles
CTO and Founder of Graphcore 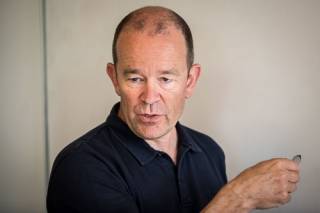 Title
Silicon Computing Capacity in the Age of AI

Abstract
Intelligence is the workload that will define computing for the next hundred years.The objective is to mechanize processes we associate with human intelligence, such as communicating in human language, making good decisions in the presence of uncertainty, and continuous learning.  At our present understanding, such work appears to require a lot of computation. Silicon is our only powerful technology for computation, and silicon is near the end of 50 years of spectacular improvement in its computing capacity.  So how does the computation that silicon can ultimately provide match up to what we might need for useful AI?

Biography
Simon is co-founder, Chief Technology Officer (CTO) and Executive Vice President (EVP) Engineering of Graphcore and is the original architect of the “Colossus” Intelligence Processing Unit (IPU). He has been designing original processors for emergent workloads for over 30 years, focussing on intelligence since 2012. Before Graphcore, Simon co-founded two other successful processor companies – Element14, acquired by Broadcom in 2000, and Icera, acquired by Nvidia in 2011.  Simon is an EE graduate of Cambridge University.

About the Mildner Lecture

Held biennially in memory of Raymond Charles Mildner [1907-1977] who, having obtained a BSc (Eng) [1927] and an MSc (Eng) [1931] from UCL, started his distinguished research career as the holder of the Robert Blair Fellowship. He made major contributions to the technology of power and communication cables, his work spanning an interdisciplinary spectrum from electromagnetic theory to materials science. In recent years the Mildner Lecture has invited researchers from industry and academia working at the forefront of technology. The lecturer is invited to inspire the EEE community and our guests.

Registration has now closed - there may be limited places remaining, if you wish to attend please contact eee-for@live.ucl.ac.uk

Festival of Research - 16th May
Registration has now closed

The event will take place in the historic Wilkins Building of UCL, the best entrance to use is the main UCL Gower St. entrance.

The Mildner Lecture will occur in the Darwin Lecture Theatre on Mallet Place.

The evening's celebratory dinner, by invitation only, will occur at the Royal National Hotel.

Over 140 Posters will be presented by our research students, including students of affiliated Centres for Doctoral Training and Early Career Researchers of the TERAOPTICS European Training Networks.

Below you can download the Poster List with abstracts - we will have a limited number of poster lists printed on the day, lists on the day will not have the abstracts printed.