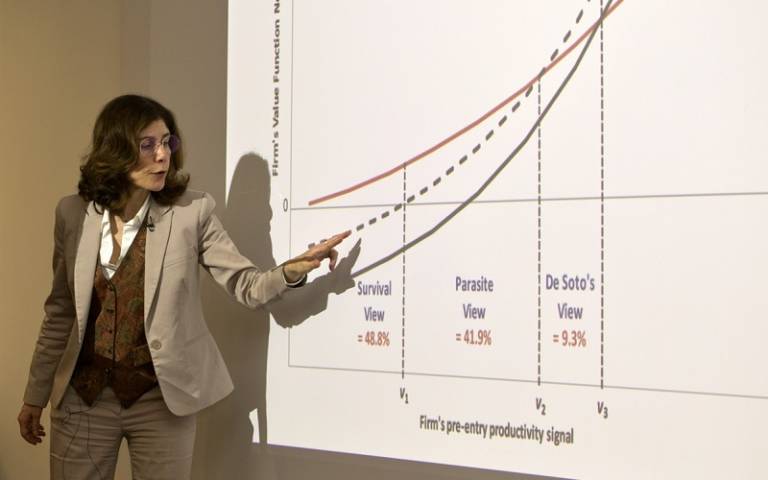 Monday 16 May 2022: Even as the exam season wanes and summer looms over Bloomsbury, students and academics alike have forsaken the warm evening air to convene in the Cruciform’s lecture hall. The occasion? UCL Economics is hosting its annual Gorman Lectures, this year featuring a visit from the world-renowned Pinelopi “Penny" Koujianou Goldberg.

As introduced by UCL’s Sir Richard Blundell, “Penny’s contributions have been recognised in every possible way”: a former editor-in-chief of the American Economic Review and World Bank Chief Economist currently teaching at Yale, her extensive work on topics ranging from human development to international trade has become pivotal at the bleeding edge of applied microeconomics - a frontier which today’s lecture promises to push further.

Based on Brazilian data, Goldberg and coauthors’ model affirms that the informal sector may in reality offer a symbiotic relationship with the formal economy, preserving welfare in the face of negative shocks. This promising new avenue of research stands against traditional economics: While this issue was often considered settled, Goldberg hopes future research will carry on the torch she has lit.

The gig economy has over the past few years taken developed countries by storm, a revolution against established formal firms brought about by the likes of Uber, AirBnB or Deliveroo. As Goldberg explains, this may point to a convergence with the developing world, where the informal sector is already king: 95% of firms and up to 70% of labour in India function without official registration. Surprisingly, this share has barely declined despite increasing trade liberalisation, mainstream economic theory, and the predictions of countless papers. This is a problem, as the mainstream view in economics is that informal firms, due to their small size and existence beyond the sphere of regulation (and thus, taxation!), are an inefficient parasite, anathema to their host country’s development. Or are they?

While unregistered firms avoid regulation and taxation (not always illegally), this also means their workers do not avail any social benefits, and that public goods provision is impaired. Why, then, do some firms prefer to remain informal over eventering the formal market? Goldberg lays out three main explanations: 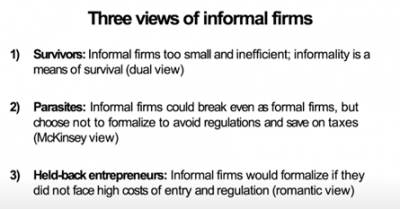 The mainstream views of informal firms

Determining which of these (if any) hold in a given country is essential, as they have vastly different policy implications. Interestingly, evidence from Brazil (pictured above), examining how informal firms would react to reductions in regulation costs suggests all three coexist there, but that the last-mentioned held-back entrepreneurs represent a negligible share (9%) of informal firms relative to the two others (49% and 42% respectively). Formal firms also turned out to be more efficient on average, gaining mainstream economics some ground.

More recent research  by UCL’s Gabriel Ulyssea has affirmed that the informal sector could also act as a buffer or stabiliser for an economy in the face of external shocks: Following the Brazilian liberalisation of 1996, formal sector unemployment skyrocketed and wages fell. However, the informal sector suffered no discernible adverse effect and appears to have absorbed the shock. This suggests a symbiotic rather than parasitic relationship between the two sides of the economy, at least to a degree.

In summary, policymakers are presented with an apparent trade-off: While stricter enforcement of formality could promote growth and a stronger fiscal base, this comes with the adverse effect of fragilising the economy in the face of shocks. This relationship is poorly understood, and the empirical evidence is at odds with what current models predict. The aim of Goldberg and her coauthors’ latest paper is thus to examine it by creating a new, formal model of an economy incorporating an informal sector.

The structural equilibrium model Goldberg and coauthors have developed is advanced, but yields ambiguous predictions: Goldberg jokes that “If you have a taste for elegant theoretical models this is not what this is: Everything is messy”. This does not mean the results are dismissible, as they bear important implications for the future of the field.

Firstly, stronger enforcement of formality by governments indeed eliminates “parasitic” inefficient firms and increases productivity, but only at the expense of employment and welfare. Interestingly, the same productivity gain can be achieved through trade liberalisation, and without adverse welfare effects.

Secondly, does the informal sector’s added flexibility really act as a buffer in the face of negative shocks? The model suggests that only employment, not welfare, is stabilised to some degree by informal firms. 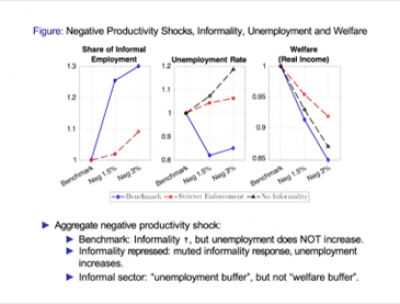 Results from the model: Against negative shocks, an informal sector is a buffer for employment, not welfare

In conclusion, Goldberg wishes for the present academics and future economists to take into careful consideration the results of this research avenue: For decades, the informal sector was disregarded and ignored by economists and their models, leading to contradictory and unexplainable real world outcomes. Admitting that her model is far from perfect, she hopes that it will inspire further work in a field that is poorly understood, even by leading experts.
The informal sector has exploded in developed economies thanks to the rise of internet platforms, and Goldberg speculates that developing countries may even possess a comparative advantage thanks to their experience. While some issues in economics are considered to be settled and abandoned by academics, the world is always changing around us, and our field must evolve with it. Penny Goldberg has once again advanced the nebulous frontier of economics, but there is much land left uncharted, and many models left to build and build anew.

Watch the 2022 Gorman Lectures back

Lecture 2: Trade and Informality in the Presence of Labor Market Frictions and Regulations

Produced as part of the CTaLE project: "Enhancing the research-education synergy" and funded by the Faculty of Social and Historical Sciences (SHS) Dean's Fund.